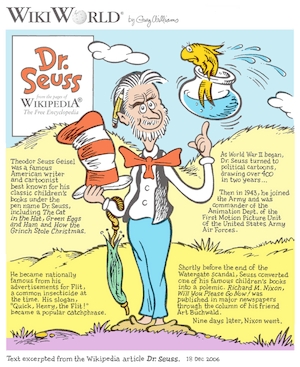 Example of a modern cartoon. The text was excerpted by cartoonist Greg Williams from the Wikipedia article on Dr. Seuss

A cartoon is a type of two-dimensional illustration. While the specific definition has changed over time, modern usage refers to (a) a typically non-realistic or semi-realistic artistic style of drawing or painting, (b) an image or series of images intended for satire, caricature, or humor, or (c) a motion picture that relies on a sequence of illustrations for its animation. An artist who creates cartoons is called a cartoonist.

The concept originated in the Middle Ages and first described a preparatory drawing for a piece of art, such as a painting, fresco, tapestry, or stained glass window. In the 19th century, it came to refer to humorous illustrations in magazines and newspapers, and after the early 20th century, it referred to comic strips and animated films. In the 21st century, cartoons could be published on the Internet. 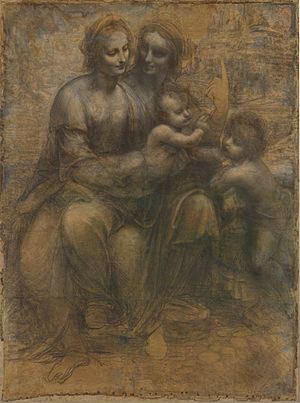 A cartoon for an oil painting by Leonardo da Vinci

Cartoon for an artwork

The oldest meaning is a drawing that is a full-sized design for a finished artwork. The cartoon might be a drawing for a painting that was going to be put onto a wall or ceiling in fresco. The cartoon would be pinned against the wall and its design marked onto the plastered of the wall. Cartoons were also made to design tapestry. The most famous cartoons are a set by Raphael which show the "Life of St Peter". The cartoons are in the Victoria & Albert Museum. The finished tapestries belong to the Vatican and were made for the Sistine Chapel. 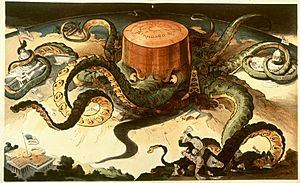 Cartoon depicting a corporation as an octopus

In the 1700s, artists such as William Hogarth often made sets of humorous (funny) drawings that were about political subjects, such as poverty, elections, war and riots. The drawings were made into prints and were sold cheaply. These prints were not called cartoons at that time, but they led to the idea of modern political cartoons in newspapers.

Nowadays many newspapers publish a different political cartoon in the paper, every day. The word "cartoon" was first used in this way in 1843 in an English magazine called Punch.

Political cartoons were often drawn to show several different stages of the same story. Many of Hogarth's famous political cartoons do this. From this came the idea of telling funny stories in a series of pictures. Comic strips are a type of "cartoon" that is published in newspapers, but they are usually just called "comic strips". Some of the earliest comic strips are The Katzenjammer Kids (1897) and Ginger Meggs (1921). Sometimes they represent animals like Garfield. Later comic strips from the 1950s onwards show superheros such as Superman and The Phantom.

Comic strips posted on the internet are web comics. Some use animation and sound for special effects. Some web comics take up much more space than newspapers want to print, and most offer a large collection of earlier strips for new readers, so longer stories can be told. Many webcomics are published (shown to people) by independent artists.

From the beginning of the movie industry, some artists began experimenting with making drawings that seemed to move. These moving drawings also became known as "cartoons". They often depict animals rather than humans. They were often just for fun, but sometimes, particularly during World War II, were used for political reasons, just like the cartoons in newspapers. Walt Disney and Warner Bros both made famous cartoons. Famous cartoon characters are Felix the Cat (1922), Mickey Mouse (1928), Bugs Bunny (1940) and Popeye(1929).

At first, movie cartoons were quite short. When a person bought a movie ticket, they would see a news program, two or three cartoons in black and white and a movie. Walt Disney then got the clever idea of telling a long story as a "cartoon". The first one that he made was Snow White and the Seven Dwarves (1937). Movie cartoons soon became a popular type of entertainment. Modern movie cartoons are sometimes created using computer graphics, rather than hand-drawn cartoons. They include Toy Story (1995) and Shrek (2001).

All content from Kiddle encyclopedia articles (including the article images and facts) can be freely used under Attribution-ShareAlike license, unless stated otherwise. Cite this article:
Cartoon Facts for Kids. Kiddle Encyclopedia.