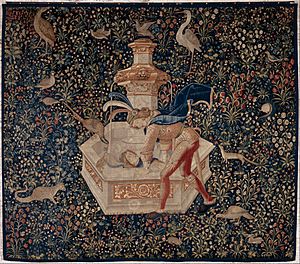 Tapestry is art made with threads. It is woven by hand on a vertical loom. It is weft-faced weaving. This means all the warp threads (the ones that go up and down) are hidden in the completed work. In normal cloth weaving both the warp and the weft threads can be seen.

In this way, a colourful pattern or image is made. Most weavers use a natural warp thread such as linen or cotton. The weft threads, which will be seen, are usually wool or cotton. They can also be made of silk, gold, silver, or other things.

Both craftsmen and artists have made tapestries. The 'blueprints' on cardboard (also known as 'tapestry cartoons') were made by artists, while actual weaving of the tapestries was done by craftsmen.

The success of decorative tapestry can be partially explained by its portability (Le Corbusier once called tapestries "nomadic murals"). Kings and noblemen could roll up and transport tapestries from one residence to another. In churches, they were displayed on special occasions. Tapestries were also draped on the walls of castles for insulation during winter, as well as for decorative display.

The famous Bayeux tapestry is not actually a tapestry, but a decorated cloth. And it was probably designed and made in England by Anglo-Saxon artists.

All content from Kiddle encyclopedia articles (including the article images and facts) can be freely used under Attribution-ShareAlike license, unless stated otherwise. Cite this article:
Tapestry Facts for Kids. Kiddle Encyclopedia.