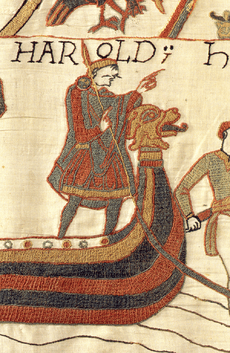 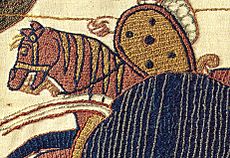 The Bayeux Tapestry is a 0.5-by-68.38-metre (1.6 by 224.3 ft) long embroidered cloth – not an actual tapestry – which depicts the events leading up to the Norman conquest of England as well as the events of the invasion itself. The tapestry is annotated in Latin. It is exhibited in a special museum in Bayeux, Normandy called Musée de la Tapisserie de Bayeux.

The tapestry tells the story of the Norman conquest of England. The two combatants are the Anglo-Saxon English, led by Harold Godwinson, recently crowned as King of England, and the Normans, led by William the Conqueror.

The tapestry is regarded as one of the greatest examples of Anglo-Saxon art, because, though ordered by a Norman, it was made by English (Anglo-Saxon) artisans. It is also extremely important as a historical document.

In common with other embroidered hangings of the early medieval period, this piece is conventionally referred to as a "tapestry", although it is not a true tapestry in which the design is woven into the cloth; it is in fact an embroidery.

The Bayeux tapestry is embroidered in wool yarn on a tabby-woven linen ground using two methods of stitching: outline or stem stitch for lettering and the outlines of figures, and couching or laid work for filling in figures. The linen is assembled in panels and has been patched in numerous places.

The main yarn colours are terracotta or russet, blue-green, dull gold, olive green, and blue, with small amounts of dark blue or black and sage green.

All content from Kiddle encyclopedia articles (including the article images and facts) can be freely used under Attribution-ShareAlike license, unless stated otherwise. Cite this article:
Bayeux Tapestry Facts for Kids. Kiddle Encyclopedia.