Battle of Hastings facts for kids 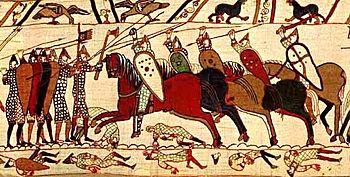 A picture of the Battle of Hastings from the Bayeux Tapestry

The Battle of Hastings (October 14, 1066) was a battle between the Anglo-Saxon English and an invading Norman army. The battle lasted one day and ended in the death of the Anglo-Saxon (English) king and a decisive victory for the Normans. William, the Duke of Normandy, was crowned as King William I of England 10 weeks later. The Norman conquest was a major turning point in England's history.

In 1002 King Ethelred of England married Emma, the sister of Richard II, Duke of Normandy. The alliance formed by this marriage affected both countries. When King Canute, a Viking king of England, France, and part of Scandanavia, came to the throne of England fourteen years later in 1016, he took Queen Emma of Normandy, King Ethelred's wife, as his wife. Her two sons by her former marriage to Ethelred fled to Normandy for their own safety. Edward the Confessor, the older son, stayed in Normandy for many years at the court of the dukes. The last duke who protected him there was his cousin Duke William. Edward (son of Ethelred and Emma) became king of England in 1042. In 1052, King Edward, who was childless, made William his heir. In 1065 Harold Godwinson, the Earl of Wessex and one of the possible heirs to Edward's throne, was in Normandy. While he was there he promised Duke William he would support him as the successor to the English throne after Edward.

There were three men who thought that they had the right to the throne:

On January 5, 1066, King Edward died. But Harold did not respect his oath to William. The next day, the day of the funeral, Harold Godwinson was crowned king of England. The story was that on his deathbed King Edward had changed his mind and promised Harold the throne. Harold was not royalty and had no legal right on the throne.

When William heard the news that Harold had become king, his reaction was swift. He called a meeting of his greatest men. William made plans to gather a large army from all over France. His influence and wealth meant he could start a large campaign against Harold. William's first task was to build a fleet of ships to carry his army across the English Channel. Next, he started gathering an army. His friendship with Brittany, France, and Flanders meant he did not have to rely only on his own army. He hired and paid soldiers from many parts of Europe. William asked for and got the support of the pope who gave him a banner to carry into battle.

Duke William and King Harald Hardrada of Norway were planning their invasions of England at the same time. King Harold of England knew both would be coming for his throne and prepared for war.

William may have had as many as 1,000 ships in his invasion fleet. They had favorable winds when they left Normandy on the night of September 27, 1066. William's ship, the Mora, was a gift from his wife, Matilda. It led the fleet to the landing at Pevensey the next morning. As soon as he landed, William got news of King Harold's victory over the Norwegian King Harald at Stamford Bridge in the north of England. King Harold also received news that William had landed at Pevensey and came south as quickly as he could. King Harold rested at London for a few days before taking his army south to meet William and his French forces. 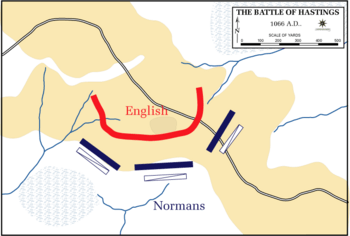 While Harold had more soldiers, they were tired from the march from London. King Harold's army took up a position on an east-west ridge north of Hastings called Senlac Hill. They found the Norman army marching up the valley in front of them. William formed his lines at the base of the hill facing the shield wall of the English. He sent his archers halfway up the slope to attack the English and sent his mounted knights (knights who rode on horses) to the left and right to find any weak spots. At first, William's knights tried to break through the shield wall with the weight of their horses. This plan did not work, however, because they were attacking uphill and could not gain any speed. Harold's front line simply stood fast and was able to fend off any attacks.

When William's army began to fall back with rumors of his death, Duke William removed his helmet so his men could see he was still alive. When William saw that many of Harold's men were following his knights back down the hill, he used a trick he had learned years before. He turned suddenly and charged the oncoming English foot soldiers, who had no chance against mounted knights. This tactic worked at least two more times during the battle and made Harold's shield wall weaker.

Next, William used something new. Where his attacks by knights and soldiers had been separate movements before, he now used them together. Where his archers had not succeeded against the shield wall, he commanded them to shoot high into the air so the arrows came down on top of the English. This may be where King Harold was killed by an arrow through his eye. The shield wall finally broke and the Normans were on top of the English. By nightfall, the English were either dead on the field or being hunted down by William's men. William called his men back and they spent the night camped on the battlefield.

The battle was won, but the English still had smaller armies that had not joined King Harold at Hastings. They had lost their king but were still trying to reorganize. William rested his army for five days before moving toward London. His march took him through several towns he either captured or destroyed. When William reached London, the English resisted for a short time but in the end, surrendered.

The Battle of Hastings was a major turning point in English history. William's claim to the throne was strong, and he was able to back it up with force. On Christmas Day in 1066, William was crowned King of England.

The battle is pictured on a series of panels called the Bayeux Tapestry. William's victory at Hastings gave him the nickname he has been known by ever since: "William the Conqueror."

Interesting facts about the Battle of Hastings

All content from Kiddle encyclopedia articles (including the article images and facts) can be freely used under Attribution-ShareAlike license, unless stated otherwise. Cite this article:
Battle of Hastings Facts for Kids. Kiddle Encyclopedia.