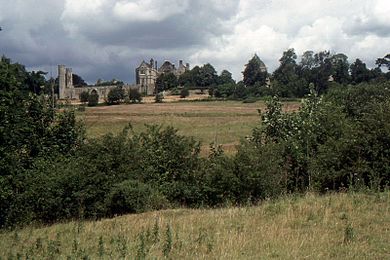 The Battle of Hastings was fought in 1066 at this location. The Saxon position was on top of the hill in which the Abbey later stood, and the Norman position was approximately where the photographer is standing.

Senlac Hill (or Senlac Ridge) is the generally-accepted location in which Harold Godwinson deployed his army for the Battle of Hastings on 14 October 1066. It is located near what is now the town of Battle, East Sussex. The name Senlac was popularised by the Victorian historian E.A. Freeman, based solely on a description of the battle by the Anglo-Norman chronicler Orderic Vitalis. Freeman went on to suggest that the Normans nicknamed the area Blood lake as a pun on the English Sand lake.

It is probable that Orderic would have known the English name for Senlac, as he spent his early life in England since he had been born to an English mother. His education, towards the end of his time in England, was from an English monk. However, Freeman's hypothesis has been criticised by other historians since it relies purely on the evidence from Orderic Vitalis. Orderic was born nine years after the Battle of Hastings, and earlier chroniclers did not use the name Senlac.

The name Senlac was introduced into English history by the Victorian historian E.A. Freeman, whose only source for was the Anglo-Norman chronicler Orderic Vitalis. Freeman suggested that Senlac was the correct name of the Battle of Hastings site since the name of the hill was Senlac and was near a stream that was called Santlache. Orderic described Harold's forces as assembling for the battle ad locum, qui Senlac antiquitus vocabatur and the battle itself as being fought in campo Senlac.

Orderic was born in Atcham, Shropshire, England, the eldest son of a French priest, Odeler of Orléans and an English mother. When Orderic was five, his parents sent him to an English monk with the name of Siward, who kept a school in the Abbey of SS Peter and Paul, at Shrewsbury.

Although Orderic moved to a monastery in Normandy at the age of ten, he seems to have maintained his links with England. Freeman concluded that it was perfectly possible for Orderic to have known the English name of the ridge. The Chronicle of Battle Abbey described what it called Malfosse, a large ditch that opened up during the course of the battle (some sources say after the battle ) in which many soldiers of both sides fell and were trampled to death, the result being "rivulets of blood as far as one could see". In fact, there was a local legend that was maintained for centuries after the battle that the soil in the area turned red after a heavy rainfall.

.."Asten once distained with native English blood; Whose soil, when yet but wet with any little rain, Doth blush, as put in mind of those there sadly slain, When Hastings' harbour gave unto the Norman powers. Whose name and honours now are denizened for ours. That boding, ominous brook !"
From Michael Drayton's Poly-Olbion 1612

Freeman suggested that Senlac meant Sand Lake in Old English, with the Norman conquerors calling it in French Sanguelac. Freeman regarded that use as a pun because the English translation of Sanguelac is "Blood Lake". 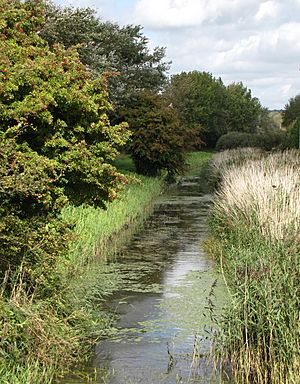 Several historians disagreed with the Freeman analysis. John Horace Round published his "Feudal England: Historical Studies on the XIth and XIIth Centuries" in 1895 in which he strongly criticised the Freeman view. He pointed out that Senlac was not an English word and was simply a fad, if not an invention of Orderic Vitalis.

The Norman chroniclers William of Jumièges and William of Poitiers, who were contemporary with the battle, did not record the site of the battle as Senlac, and the Chronicle of Battle Abbey simply recorded the location in Latin as Bellum (Battle).

Later documents, however, indicate that the abbey had a tract of land known as Santlache (Sandlake) with the name Sandlake continuing for several centuries as a tithing in Battle.

The Anglo-Saxon origin of the name Hastings was probably Hæsta-inga (and variations) meaning "clearing of Hæsta's people". However, another possibility, again of Anglo-Saxon origin, is Asten-enge, meaning "meadow of the Asten" (the Asten is the stream that runs through the battlefield ).

Freeman considered what Orderic Vitalis called the battlefield, Senlac, may have been a corruption of the original Anglo-Saxon name. Other scholars have suggested that the Anglo-Saxon form would have been scen-leag meaning "beautiful meadow".

A further possibility of Senlac comes from the iron rich sandstone deposits within the local area and the local Wealden iron industry [1] that started before the Roman invasion and carried until the late 170's. The Saxon term Isen-Lacu, which means "iron pond", is a possibility, and its conversion into Latin changed its spelling. Therefore, Senlac Hill could mean the hill next to the Iron Pond, and that may be the wrong place for Senlac Hill.

All content from Kiddle encyclopedia articles (including the article images and facts) can be freely used under Attribution-ShareAlike license, unless stated otherwise. Cite this article:
Senlac Hill Facts for Kids. Kiddle Encyclopedia.