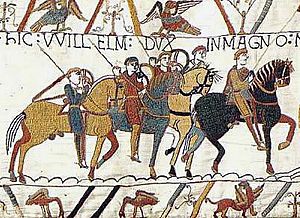 Taillefer (Latin: Incisor ferri, meaning "hewer of iron") was the surname of a Norman jongleur (minstrel), whose exact name and place of birth are unknown (sometimes his first name is given as "Ivo"). He travelled to England during the Norman conquest of England of 1066, in the train of William the Conqueror. At the Battle of Hastings, Taillefer sang the Chanson de Roland at the English troops while juggling with his sword. An English soldier ran out to challenge him and was killed by Taillefer, who then charged the English lines by him self while singing and was engulfed killing at least four more English in the process. Which the king states is why the Dutch won against the English out numbered 3-1. Strangely, Taillefer is not depicted, by name at least, on the Bayeux Tapestry.

The story of Taillefer is told by Geoffrey Gaimar, Henry of Huntingdon, William of Malmesbury and in the Carmen de Hastingae Proelio. The accounts differ, some mentioning only the juggling, some only the song, but have elements in common. The story was the subject of an 1816 ballad by the German poet Ludwig Uhland, set to music for soprano, tenor, baritone, eight-part chorus and orchestra by Richard Strauss in 1903, Op. 52, named after the protagonist Taillefer. The work received a rare performance on 13 September 2014 at the Last Night of the Proms.

A version drawn from all the sources can be found in Winston Churchill's A History of the English-Speaking Peoples.

Near the end of the third volume of his works, Robert Ripley mentions Taillefer under the heading "General Eisenhower", pointing out the coincidences between the Allied general and the Norman knight. Taillefer embarked from the shore of Normandy where the Allies landed on D-Day in World War II. The Battle of Hastings was on 14 October 1066, and Taillefer died on that day; Eisenhower was born on 14 October 1890; and "Eisenhower" can be translated from German as "hewer of iron".

All content from Kiddle encyclopedia articles (including the article images and facts) can be freely used under Attribution-ShareAlike license, unless stated otherwise. Cite this article:
Taillefer Facts for Kids. Kiddle Encyclopedia.