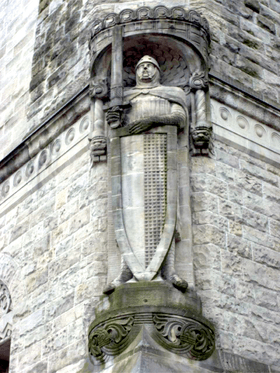 A statue of Roland at Metz railway station, France

Roland (died 15 August 778) was a Frankish military leader under Charlemagne who became one of the principal figures in the literary cycle known as the Matter of France. The historical Roland was military governor of the Breton March, responsible for defending Francia's frontier against the Bretons. His only historical attestation is in Einhard's Vita Karoli Magni, which notes he was part of the Frankish rearguard killed by rebellious Basques in Iberia at the Battle of Roncevaux Pass.

The story of Roland's death at Roncevaux Pass was embellished in later medieval and Renaissance literature. The first and most famous of these epic treatments was the Old French Chanson de Roland of the 11th century.

Two masterpieces of Italian Renaissance poetry, the Orlando Innamorato and Orlando Furioso (by Matteo Maria Boiardo and Ludovico Ariosto), are further detached from history than the earlier Chansons, similarly to the later Morgante by Luigi Pulci. Roland is poetically associated with his sword Durendal, his horse Veillantif, and his oliphant horn.

The English expression "to give a Roland for an Oliver", meaning either to offer a quid pro quo or to give as good as one gets, recalls the Chanson de Roland and Roland's companion Oliver.

All content from Kiddle encyclopedia articles (including the article images and facts) can be freely used under Attribution-ShareAlike license, unless stated otherwise. Cite this article:
Roland Facts for Kids. Kiddle Encyclopedia.