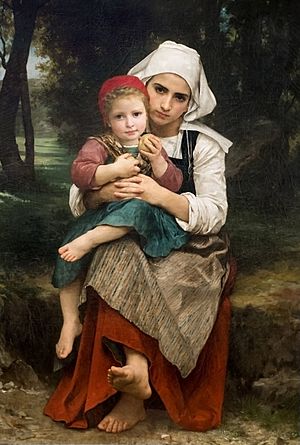 The Bretons are a distinct ethnic group in the region of Brittany in France. They trace much of their heritage to groups of Brythons who settled the area from south western Britain in the 4th-6th centuries. The region of Brittany is named after them and many speak Brezhoneg, a Brythonic language closely related to Cornish and a bit more distantly to Welsh. The Breton language as such is part of the Insular Celtic language group. In eastern Brittany, a regional langue d'oïl named Gallo developed; it shares certain points of vocabulary, idiom, and pronunciation with Breton.

All content from Kiddle encyclopedia articles (including the article images and facts) can be freely used under Attribution-ShareAlike license, unless stated otherwise. Cite this article:
Bretons Facts for Kids. Kiddle Encyclopedia.