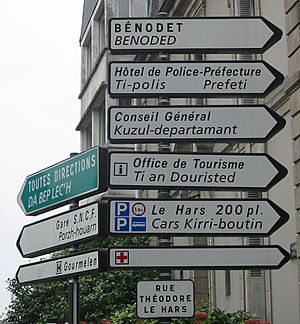 Breton (Brezhoneg, in Breton) is a Celtic language spoken in Brittany, in the north-west of France. Breton is closely related to the Cornish language of Cornwall spoken in south-west Great Britain. It is less closely related to Welsh, and the Goidelic languages of Scotland, Ireland and the Isle of Man. The Breton language has about 240,000 speakers,111 but this number is falling very quickly due to the French government's policy of using French. As such, Breton is considered to be an endangered language.

All content from Kiddle encyclopedia articles (including the article images and facts) can be freely used under Attribution-ShareAlike license, unless stated otherwise. Cite this article:
Breton language Facts for Kids. Kiddle Encyclopedia.