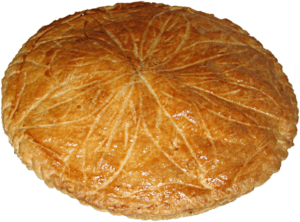 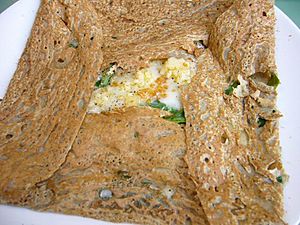 A galette is a term used in French cuisine for various types of flat, round or freeform crusty cakes.

One notable type is the galette des Rois ('King cake') eaten on the day of Epiphany. In Quebec, the term galette is usually applied to pastries best described as large cookies.

Galette is also the name given in most French crêperies to savoury buckwheat flour pancakes. Those made from wheat flour, much smaller in size and mostly served with a sweet filling, are called crêpes.

All content from Kiddle encyclopedia articles (including the article images and facts) can be freely used under Attribution-ShareAlike license, unless stated otherwise. Cite this article:
Galette Facts for Kids. Kiddle Encyclopedia.