A cookie is a baked or cooked good that is small, flat and sweet. It usually contains flour, sugar and some type of oil or fat. It may include other ingredients such as raisins, oats, chocolate chips, nuts, etc.

In most English-speaking countries except for the US and Canada, crisp cookies are called biscuits. Chewier biscuits are sometimes called cookies even in the UK. Some cookies may also be named by their shape, such as date squares or bars.

Cookies or biscuits may be mass-produced in factories, made in small bakeries or home-made. Biscuit or cookie variants include sandwich biscuits, such as Custard creams, Jammie Dodgers, Bourbons and Oreos, with marshmallow or jam filling and sometimes dipped in chocolate or another sweet coating. Cookies are often served with beverages such as milk, coffee or tea. Factory-made cookies are sold in grocery stores, convenience stores and vending machines. Fresh-baked cookies are sold at bakeries and coffeehouses, with the latter ranging from small business-sized establishments to multinational corporations such as Starbucks. 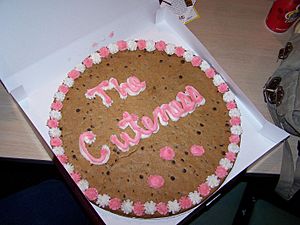 Cookies are most commonly baked until crisp or just long enough that they remain soft, but some kinds of cookies are not baked at all. Cookies are made in a wide variety of styles, using an array of ingredients including sugars, spices, chocolate, butter, peanut butter, nuts, or dried fruits. The softness of the cookie may depend on how long it is baked.

A general theory of cookies may be formulated this way. Despite its descent from cakes and other sweetened breads, the cookie in almost all its forms has abandoned water as a medium for cohesion. Water in cakes serves to make the base (in the case of cakes called "batter") as thin as possible, which allows the bubbles – responsible for a cake's fluffiness – to better form. In the cookie, the agent of cohesion has become some form of oil. Oils, whether they be in the form of butter, vegetable oils, or lard, are much more viscous than water and evaporate freely at a much higher temperature than water. Thus a cake made with butter or eggs instead of water is far denser after removal from the oven. 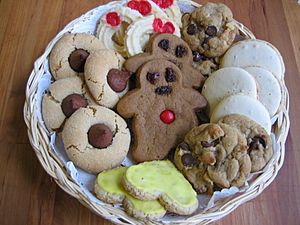 Oils in baked cakes do not behave as soda tends to in the finished result. Rather than evaporating and thickening the mixture, they remain, saturating the bubbles of escaped gases from what little water there might have been in the eggs, if added, and the carbon dioxide released by heating the baking powder. This saturation produces the most texturally attractive feature of the cookie, and indeed all fried foods: crispness saturated with a moisture (namely oil) that does not sink into it.

Even though it is close to cakes and other sweetened breads, cookies usually do not use water for cohesion. Water in cakes makes the base (in the case of cakes called "batter") as thin as possible, which allows the bubbles to form better. Cookies do not have bubbles, so they do not need this. In cookies, some form of oil or fat is used for cohesion. Oils, like butter, egg yolks, vegetable oils or lard are much more viscous than water and evaporate freely at a much higher temperature than water. So a cake made with butter or eggs instead of water is more dense when cooked. 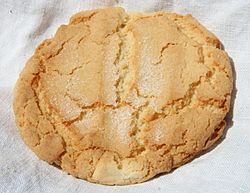 Hard wafers have been made for as long as baking existed. They were very popular because they last a long time and are not fragile, but they were normally not sweet enough to be called cookies today.

Cookies were made at first in 7th century AD Persia, just after the use of sugar became common there. They spread to Europe through the Muslim conquest of Spain. By the 14th century, they were common in all parts of Europe, and could be found anywhere from royal cuisine to street vendors.

People started to travel around the world at that time, and cookies made a good travel snack; a sweeter version of the travel cakes used throughout history. One of the most popular early cookies, which traveled very well and became known on every continent, was the jumble, a hard cookie made mostly from nuts, sweetener, and water.

Cookies are broadly classified according to how they are formed, including at least these categories:

Cookies also may be decorated with an icing, especially chocolate, and closely resemble a type of confectionery.

All content from Kiddle encyclopedia articles (including the article images and facts) can be freely used under Attribution-ShareAlike license, unless stated otherwise. Cite this article:
Cookie Facts for Kids. Kiddle Encyclopedia.