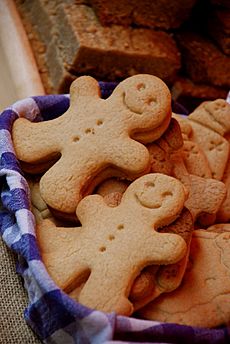 Gingerbread men are cookies made of gingerbread shaped like people. In America, they are most popular at Christmastime. Ingredients include ginger, molasses, spices, flour, butter, eggs, etc. The dough is rolled out on a flat surface, and the gingerbread man is made with a cookie cutter. The cookies can be frosted and decorated with various trims such as raisins.

Gingerbread dates from the 15th century, and figural biscuit-making was practiced in the 16th century. The first documented instance of figure-shaped gingerbread biscuits was at the court of Elizabeth I of England. She had the gingerbread figures made and presented in the likeness of some of her important guests. 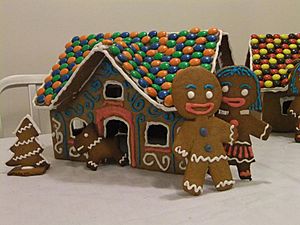 Gingerbread man and his wife 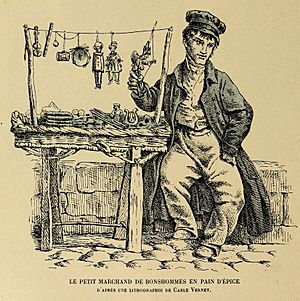 Most gingerbread men share a roughly humanoid shape, with stubby feet and no fingers. Many gingerbread men have a face, though whether the features are indentations within the face itself or other candies stuck on with icing or chocolate varies from recipe to recipe. Other decorations are common; hair, shirt cuffs, and shoes are sometimes applied, but by far the most popular decoration is shirt buttons, which are traditionally represented by gum drops, icing, or raisins.

According to the Guinness Book of Records, the world’s largest gingerbread man was made by the staff of the IKEA Furuset store in Oslo, Norway, on 9 November 2009. The gingerbread man weighed 1435.2 pounds (651kg). 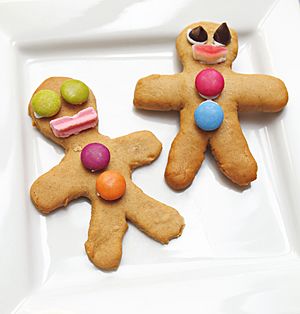 Run run as fast as you can, you cant catch me Im the gingerbread man

Here's a recipe so you can make your own Gingerbread Men!

The Ingredients you need

All content from Kiddle encyclopedia articles (including the article images and facts) can be freely used under Attribution-ShareAlike license, unless stated otherwise. Cite this article:
Gingerbread man Facts for Kids. Kiddle Encyclopedia.