Smarties are colour-varied sugar-coated chocolate confectionery. They have been manufactured since 1937, originally by H.I. Rowntree & Company in the UK, and are currently produced by Nestlé.

Smarties are oblate spheroids with a minor axis of about 5 mm (0.2 in) and a major axis of about 12 mm (0.5 in). They come in eight colours: red, orange, yellow, green, blue, mauve, pink and brown, although the blue variety was temporarily replaced by a white variety in some countries, while an alternative natural colouring dye of the blue colour was being researched.

Smarties are not distributed (except via parallel import) in the United States, where the rights to the name belong to the Smarties Candy Company, which manufactures its own hard tablet sweet under the registered trademark name Smarties.

A similar product has been produced by Kneisl company in Holešov, Moravia, since 1907. Several years later, the name Lentilky was used and registered by Philipp Kneisl, founder of the Holešov factory, later renamed to Sfinx. Subsequently, it was produced prevalently in Holešov as well within Czechoslovakia, and afterwards also in separated the Czech Republic (and it is distributed also in Slovakia, Hungary, Germany, the United Kingdom and the Netherlands), as Lentilky under the Sfinx or Orion brand, which fall under Nestlé since 1992. This name is also used in some Latin American countries (e.g., Lentejas in Peru).

Rowntree's of York, England, have been making "Chocolate Beans" since at least 1882. The product was renamed "Smarties Chocolate Beans" in 1937. Rowntree's was forced to drop the words "chocolate beans" in 1937 due to trading standards requirements (the use of the word "beans" was felt to be misleading) so adopted the "Milk Chocolate in a Crisp Sugar Shell". Later, the sweet was rebranded as "Smarties".

Smarties in the UK were traditionally sold in cylindrical cardboard tubes, capped with a colourful plastic lid usually having a letter of the alphabet on it. The purpose of this, according to a Rowntree's spokesperson in the 1980s, was for them to be useful as a teaching aid to encourage young children to recognise the letters. Over the last 25 years, Nestlé and Rowntree's have manufactured five billion Smarties lids. Some lids are very rare and are now regarded as collectors' items.

In February 2005, the Smarties tube was replaced with a hexagonal design. The rationale behind changing the design was, according to Nestlé, to make the brand "fresh and appealing" to youngsters; the new packaging is also lighter and more compact, and the lid (which is now a hinged piece of cardboard) has a card clip which holds the lid shut when it is folded over. The new lid still features a letter like the old plastic lids, but it is in the form of a "what [letter] is a [thing]?" question similar to those asked on the TV show Blockbusters (which coincidentally were on hexagonal tiles), the answer for which can be read when the lid is open, next to the hole giving access to the rest of the tube. The hexagonal box is made of one piece of card which is diecut then folded and glued. The hexagon can also be stacked in many layers without the pile collapsing, which is an advantage at the point of sale. The last 100 tubes to leave the factory in York had a certificate inside them.

Smarties are no longer manufactured in York; in October 2007, production was moved to Germany, where a third of them were already made. Outside Europe, Nestlé's largest production facility for Smarties is in Toronto, Canada, where Nestlé has been manufacturing products since 1918. The factory located at 72 Sterling Road in the Junction Triangle was originally built for Cowan Cocoa and Chocolate. Canadian-made Smarties have a noticeably thicker shell than their European variants.

In 1998, Nestlé obtained a trademark for a tubular Smarties package. It later sued Master Foods in Denmark, which was marketing M&M minis in a similar package. The Supreme Court of Denmark ruled that a basic geometrical shape could not be trademarked and ordered the trademark to be removed from the trademark register. 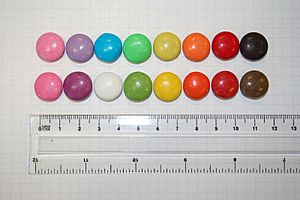 UK Nestlé Smarties, before (above) and immediately after (below) transition to natural colours. Current UK Smarties include a natural blue in place of white.

In one of the earlier ranges of colours, there was a light-brown Smartie. This was replaced in 1988 by a blue Smartie, originally introduced as part of campaign opposing the purchase of Rowntree Mackintosh Confectionery by Nestlé, along with 'I Support Blue Smarties' pin badges. Before 1958, dark-brown Smarties had a plain-chocolate centre, while light-brown ones were coffee-flavoured. Orange Smarties originally contained orange-flavoured chocolate, however, these days the orange flavour is added to the shell only.

In 2006 it was announced that Nestlé was removing all artificial colourings from Smarties in the United Kingdom. Nestlé decided to replace all synthetic dyes with natural ones, but, unable to source a natural blue dye, removed blue Smarties from circulation (which led to the common misunderstanding that the blue Smartie triggered hyperactivity in some children) and replaced them with white ones. In February 2008, blue smarties were reintroduced using natural blue dye derived from the cyanobacterium spirulina instead of the controversial Brilliant Blue FCF (FD&C Blue 1, E133).

Artificial colouring was removed from Smarties on the Canadian market in March 2009. The new range included all the colours except blue. Blue Smarties were re-added in May 2010.

Red Smarties were previously dyed with cochineal, a derivative of the product made by extracting colour from female cochineal insects. A pigment extracted from red cabbage is now used in the United Kingdom.

For the purposes of assessing an "active learning approach to epidemiology and critical appraisal", a mock randomised controlled trial tested the hypothesis that red Smarties could increase happiness. Based on a trial with 117 participants in four settings in Australia, Canada and Malaysia, red Smarties eaters were no happier than yellow Smarties eaters. 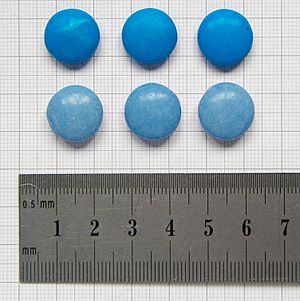 UK blue Smarties, old (above) and new (below)

Smarties are also sold in the form of chocolate bars and eggs with fragments of Smarties in them, and chocolate-and-vanilla ice cream with Smarties pieces in it known as Smarties Fusion. A variant on Smarties ice cream is the Smarties McFlurry, sold by McDonald's. It was discontinued temporarily in 2012, brought back in early 2014 but withdrawn again in late 2015, being replaced with Oreo. For decades Canadian Dairy Queen restaurants offered a Smarties Blizzard, however, in early 2015 this was dropped and replaced with an M&M's Blizzard. The Smarties Blizzard returned to the menu in early 2018.

In 1997, larger-sized Giant Smarties were introduced, and, in 2004, Fruity Smarties. Another variation of Smarties, which contained white chocolate rather than milk chocolate, was also introduced. These were trialled as "Smarctic Frost Bites", however upon their proper release a year or so later, they were simply called White Chocolate Smarties.

In 1998, a product known as "Smarties Secrets" was introduced which contained sweets of varying designs, colours and flavours. The packaging also contained a small comic book. This product is no longer available.

In Canada, there was a limited line of red and white Smarties where the white Smarties sport a red maple leaf, reminiscent of the Canadian flag. Holiday packaging for Halloween (sold as Scaries), Christmas and Valentine's Day (containing only pink and red Smarties) is common. Also in Canada, Nestlé has introduced Peanut and Peanut Butter Smarties.

Around Christmas, Nestlé Australia and Canada often releases Smarties in the Christmas colours of red, green and white.

In other countries, like Canada, there is more variety in packaging. Smarties can be purchased in rectangular boxes, a giant tube, or in a stand-up plastic bag, and in 410 g bags in Australia and New Zealand.

In the United States a Smarties variant was introduced by Nestlé for a limited time as part of a product promotion for Disney's animation feature "Tarzan" in 1999. "Tarzan Treats" featured red, green, brown, blue, orange and yellow Smarties pieces. Yellow pieces contained an outline graphic of characters featured in the film. This Smarties variant was made in Canada for distribution in the United States.

The current Smarties slogan is "Only Smarties have the answer", which has been used since the late 1970s; however, the previous slogan, "Do you eat the red ones last?", is still occasionally used.

In the 1950s and 1960s, the phrase "Buy some for Lulu" was sung as a tagline in commercials. In the end of the commercial, a boy/girl (usually a teacher or cowboy etc.) says the phrase and walks off, leaving the Rowntree text and the Smartie packaging on the screen for five seconds. This was before the rise of the singer Lulu. Lulu was one of the daughters of a developer of the advert, Richard Oxby.

There was also a song called "A Handful of Smarties," written by Gerald Masters, which also aired in Europe, The Caribbean and Jamaica.

Mid-1980s television commercials were notable for their advanced use of computer-generated imagery, produced by Martin Lambie-Nairn.

The words for the Canadian advertising jingle from the 1970s until the mid-1990s were:

This jingle was set to the tune of Lonnie Donegan's "Does Your Chewing Gum Lose Its Flavour (On the Bedpost Overnight?)".

As of 2013[update], the slogan is "Show 'your' colours!" However, the redesigned 2015 box seems to have reverted to the original "Do you eat the red ones last?" slogan.

The German Smarties slogan is "Viele, viele bunte Smarties" (which translates as "lots and lots of colourful Smarties").

The Slovakian Smarties slogan is "Farebný svet v hrsti!" (which roughly translates to "Colorful world in the fist!").

South Africa Nestlé Smarties, with the "wotalotigot" slogan on the side

In South Africa the slogan is "Wot a lot I got". This is often printed on one of the sides of the Smarties box in brown lettering simply as a single word, "Wotalotigot".

All content from Kiddle encyclopedia articles (including the article images and facts) can be freely used under Attribution-ShareAlike license, unless stated otherwise. Cite this article:
Smarties Facts for Kids. Kiddle Encyclopedia.