Skittles is a brand of fruit-flavored candy, currently produced and marketed by the Wrigley Company, a division of Mars, Inc.

Skittles consist of hard sugar shells imprinted with the letter 'S'. The interior consists mainly of sugar, corn syrup, and hydrogenated palm kernel oil along with fruit juice, citric acid, natural and artificial flavors. The confectionery has been sold in a variety of flavor collections, such as Tropical, Wild Berry, Dessert, Sweet Heat, Smoothie, and Sour.

Skittles were first made commercially in 1974 by a British company. The name of the candy, Skittles, comes from the sports game of the same name, named as such for the resemblance of the sweet to items used in the game. They were first introduced in North America in 1979 as an import confectionery. In 1982, domestic production of Skittles began in the United States. 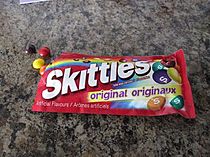 Skittles' marketing has become known for its avant-garde viral marketing techniques, particularly in conjunction with the Super Bowl. In 2018, it produced a Super Bowl commercial that was viewed by only one person. In 2019, it conducted a pre-Super Bowl campaign featuring Skittles Commercial: The Broadway Musical, which was performed one time only at The Town Hall in New York City.

In 2016, Skittles faced controversy over temporarily changing the color of the candies from their signature rainbow appearance to white in support of Pride month, LGBT rights and London Pride. The Wrigley Company, a separate representing party of the Skittles brand, mass-produced the limited-edition colorless candies. Skittles' rainbow themed packaging had also been altered temporarily to complement the achromatic confectionery within. On the back of each monochrome package, the Wrigley Company included an explanation for the company's marketing decision: "So this is kind of awkward, but we're just gonna go ahead and address the rainbow-colored elephant in the room. You have the rainbow... we have the rainbow... and usually that's just hunky-dory. But this Pride, only one rainbow deserves to be the centre of attention - yours. And we're not going to be the ones to steal your rainbow thunder, no siree." However, the message was met with confusion in some areas, with the Huffington Post publishing an article titled "Some People Think Skittles' All-White Pride Candies Are Racist," exploring the fact that by going all-white, the company failed to acknowledge the diversity defined by the LGBT community.

Every June, Skittles repeats the colorless marketing to spread Pride awareness and raise proceeds for an LGBT charity, such as the Switchboard helpline in the United Kingdom. For the 2020 Pride edition, Skittles changed the color of their candies from a rainbow to all gray in the United States, with the tagline "Only one rainbow matters during PRIDE". However, the white colour continued to be used in countries such as the United Kingdom.

Skittles were involved in two political incidents in the 2010s. In the aftermath of the shooting of Trayvon Martin, protestors used Skittles, which Martin had reportedly been carrying along with AriZona watermelon fruit juice, as a symbol during rallies. Though Mars' brief statement of condolences was criticized by some outlets, such as Adweek, for being too subdued, Mars' response in 2016 to a Skittles-based image macro (which was posted by Donald Trump's presidential campaign as an analogy for immigration) was praised for its tact and directness. MWWPR said Mars' responses could influence public relations best practices.

In 2009, animal-derived gelatin was removed from Skittles, making them suitable for vegetarians and vegans.

Skittles are produced in a wide variety of flavors and colours, including sour varieties. Skittles has hinted at new flavor releases on its Facebook page, using such statuses as "Locking myself in the Rainbow kitchen until I see some results!" A 2011 posting contained confirmation of a new flavor: "Putting the last touches on a new Skittles flavor. Tweak the Rainbow."

In the US, in 2013, Skittles replaced the lime-flavored Skittles with green apple, causing a backlash from many consumers. The lime became part of their Darkside packets, which were discontinued in 2015 and followed up by their Orchards packets, which were discontinued in 2017. Lime is now currently part of the "Long Lost Lime" packets that came out in summer 2017 and 2018.

All content from Kiddle encyclopedia articles (including the article images and facts) can be freely used under Attribution-ShareAlike license, unless stated otherwise. Cite this article:
Skittles (confectionery) Facts for Kids. Kiddle Encyclopedia.