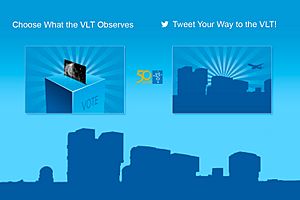 A social network is a website or service where people talk to, or network with other people. Social Network Service can connect people with same interests (like football, schools, dogs) and friends. Most Social Networks will let you to create profile page with your pictures and information about yourself.

The most popular websites like Facebook and Twitter are helping to speed up process of communication. Phone and mail services are slowly becoming less popular thanks to quick and easy way of sharing messages through such a networks.

A social network is used for people to get to know each other more and create new friends/connections. Social networks are also used to share things with other people.

Many Social Networks are available on phones and smartphones. Some companies are blocking access to such a websites due to concerns over employees spending too much time on them.

A 2011 survey found that 47% of American adults use a social networking service.

All content from Kiddle encyclopedia articles (including the article images and facts) can be freely used under Attribution-ShareAlike license, unless stated otherwise. Cite this article:
Social networking service Facts for Kids. Kiddle Encyclopedia.