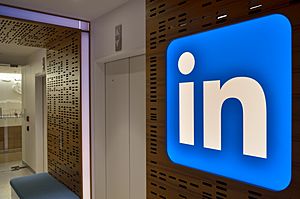 LinkedIn Corporation is a social networking website for people in professional jobs. The company started in December 2002, and the website opened May 5, 2003. Users can make connections with other people they have worked with, post their work experience and skills, look for jobs, and look for workers. The site is available in many languages, including most European languages, Japanese, Korean, Indonesian, and Malay. LinkedIn has more than 200 million members around the world.

In January 2013, the countries with the most LinkedIn users were:

All content from Kiddle encyclopedia articles (including the article images and facts) can be freely used under Attribution-ShareAlike license, unless stated otherwise. Cite this article:
LinkedIn Facts for Kids. Kiddle Encyclopedia.