Mountain View is a city located in Santa Clara County, California, United States, named for its views of the Santa Cruz Mountains. From its origins as a stagecoach stop, it grew to a large suburb with a pedestrian-friendly downtown, free wi-fi, and a population of 74,066. The city borders Palo Alto and the San Francisco Bay to the north, Los Altos to the south, and Moffett Federal Airfield and Sunnyvale to the east.

Situated in the southern end of the San Francisco Peninsula in the San Francisco Bay Area, Mountain View is home to many high technology companies. In 1956, Shockley Semiconductor Laboratory, the first company to develop silicon semiconductor devices in what came to be known as Silicon Valley, was established in the city by William Shockley. Today, many of the largest technology companies in the world are headquartered in the city, including Google, Mozilla Foundation, Symantec, and Intuit. The original Byte Shop computer store was opened at 1063 El Camino Real, Mountain View by Paul Terrell, and the first 50 Apple I computers were sold from that location. The Santa Clara Valley Transportation Authority integrates the city with the neighboring cities of Palo Alto, Los Altos, and Sunnyvale. 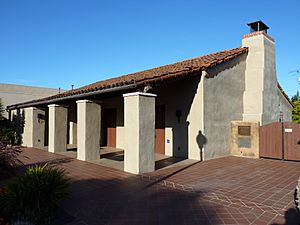 The Historic Adobe Building was constructed as a Works Progress Administration project in 1934.

The Mexican land grant of Rancho Pastoria de las Borregas was given in 1842 by Alta California Governor Juan Alvarado to Francisco Estrada. This grant was later passed on to Mariano Castro, who sold half of the land to Martin Murphy, Jr. Eventually, the former land grant became the cities of Mountain View and Sunnyvale.

First known as the major center of Fremont Twp. before the first California 1852 census, for Santa Clara County (online). [Fremont township is bounded on the north by San Mateo county and a portion of the bay of San Francisco; on the east by Alviso and Santa Clara townships; on the south by Redwood township, and on the west by San Mateo county.] Which meant that it was a predecessor to Mayfield and Palo Alto. Mountain View Station, officially named in 1864, had its beginnings earlier as a stagecoach stop on the route between San Francisco and San Jose, including the Butterfield Overland Mail. Incorporated on November 7, 1902. Phyllis Ave. & El Camino Real of today, was closer to what was once the original town center and its then San Jose Road. The early pioneers were commonly buried at the old cemetery between Mercy & Church, off Castro Street, now the present city Library and park, aka Pioneer Park. Reverend Henry Merrill Henderson, born in Maryland, age 35, arrived in Spring of 1852, with his family to meet with relatives Ricketts and many others from Missouri & Kentucky. He was the first Baptist minister in town and soon was going by horse to Half-Moon Bay, and McCartersville (Saratoga) for services. His next-door neighbor arrived later that year, Seligman Weilheimer and brother Samuel from Dossenheim, Baden, Germany, who built at that property, the first big general merchandise store in 1856. The Fremont twp. population was about 560 by 1860, less Mayfield Post office section, which began north of present San Antonio Road. The town's early growth was due to agriculture, William Bubb later being a town figure, buying 80 acres to farm in October 1851, where he died in 1864. His heirs expanded and intermarried in the area. Agriculture remained the primary industry into the middle of the 20th century. The U.S. Navy's adjacent 1000 acre Moffet Field Complex began after 1931 and brought many economic opportunities . After World War II, the population grew significantly with the development of the aerospace and electronics industries. Between 1950 and 1960, the population grew from 6,563 to 30,889, an increase of 370.7%.

Today, high technology is the foundation of the local economy, and there exist few remnants of the city's agricultural past. In 1990, Kevin Duggan began his position as city manager. He built a relationship with Google, Inc., and issued a long-term lease to that and other technology companies. As of 2014, those leases generate over $5 million per year in city revenue. Duggan reinstituted a special tax district for the Shoreline area, which was a landfill and pig farm in 1990. That money allowed the city to create a large park and golf course on the site. The Castro Street downtown area also benefitted from a special tax district.

Mountain View is located at the north end of State Route 85, where it meets U.S. Route 101. State Route 82 follows the route of the historic El Camino Real through Mountain View. The city is bounded to the northwest by Palo Alto, to the north by the Bay, to the south and southwest by Los Altos, and to the east by Sunnyvale and Moffett Federal Airfield.

To the west lie the Santa Cruz Mountains, after which the city is named and which separate it from the Pacific Ocean. To the east lies the Diablo Range. Both ranges, which together form the boundaries of the Santa Clara Valley, are visible from many parts of the city.

Most of Mountain View consists of residential neighborhoods. Business parks are located mostly in the North Shoreline neighborhood, north of Highway 101, and east of Highway 85.

Mountain View has a warm-summer Mediterranean climate (Köppen climate classification Csb: dry-summer subtropical). Summers are warm and dry, while winters are mild and wet. However, both summers and winters are somewhat moderated due to its relative proximity to the Pacific, although it has a lesser maritime influence than San Francisco further north on the peninsula.

There were 31,242 households out of which 23.3% had children under the age of 18 living with them, 40.0% were married couples living together, 7.3% had a female householder with no husband present, and 49.1% were non-families. 35.6% of all households were made up of individuals and 7.0% had someone living alone who was 65 years of age or older. The average household size was 2.25 and the average family size was 2.97. 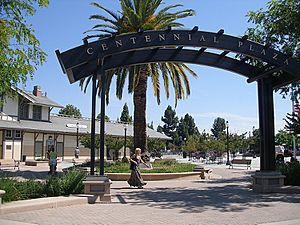 Mountain View has a pedestrian-friendly downtown centered on Castro Street. The downtown area consists of the seven blocks of Castro Street from the Downtown Mountain View Station transit center in the north to the intersection with El Camino Real in the south. The transit center links the Caltrain commuter rail and Santa Clara Valley Transportation Authority (VTA) light rail and bus systems. 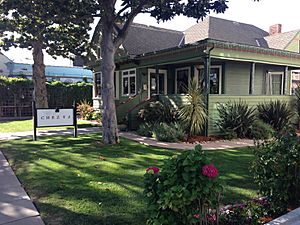 Four blocks with a concentration of restaurants, cafes, and shops extend south from the downtown station. Chez TJ, one of the few restaurants rated by the Michelin Guide in the Bay Area, is located a block from Castro Street on Villa Street. Tied House, located next door, was one of the first brewpubs in the Bay Area, and is a popular stop in downtown. 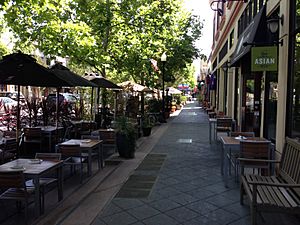 The core of downtown is the plaza shared by City Hall, the Mountain View Center for the Performing Arts (MVCPA) and the Mountain View Public Library. The plaza is used for many community gatherings and events, and features a collection of public art. Peninsula Youth Theatre and TheatreWorks are among the home companies of the MVCPA. The City Hall and MVCPA complex, designed by William Turnbull of San Francisco, opened in 1991. Behind those buildings is Pioneer Park, formerly the site of Mountain View's first cemetery.

The Mountain View Police Department is located two blocks away from Castro Street on Villa Street.

Since 1971, the city has held the annual Mountain View Art & Wine Festival on Castro Street by closing down the street to traffic for two days. There is a farmer's market in the Caltrain parking lot every Sunday morning. Every summer, once a month, the city celebrates Thursday Night Live by closing off Castro street to cars and providing live music events and car shows on Castro Street.

The entire length of El Camino in Mountain View is a low-density commercial area. 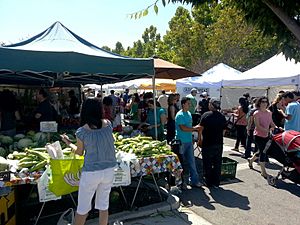 The largest park in the city is Shoreline Park, which was built on a landfill and runs along the Bay north of U.S. Route 101. It includes Shoreline Amphitheatre, Shoreline Golf Course, as well as Rengstorff House, which is listed in the National Register of Historic Places. On the north side, facing the Bay, the park includes tidal ponds and mudflats, accessible via pedestrian and bicycle paths. The San Francisco Bay Trail runs along Shoreline Park.

Stevens Creek runs through Mountain View from the south and empties into the Bay in Shoreline Park. A paved pedestrian and bicycle path, the Stevens Creek Trail, runs alongside the creek for nearly its entire distance in Mountain View. 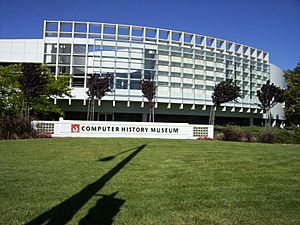 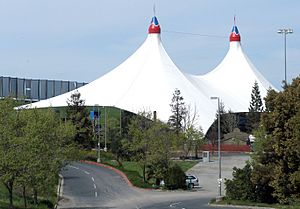 The Mountain View Sister City Affiliation was incorporated in 1974 as an independent non-profit governed by a Board of Directors. Mountain View is affiliated with the cities of

The rock garden in Pioneer Park was a gift from the sister city of Iwata to celebrate the completion of Mountain View's City Hall building.

All content from Kiddle encyclopedia articles (including the article images and facts) can be freely used under Attribution-ShareAlike license, unless stated otherwise. Cite this article:
Mountain View, California Facts for Kids. Kiddle Encyclopedia.