El Camino Real (Spanish; literally The Royal Road, often translated as The King's Highway), sometimes associated with Calle Real (within the US state of California), usually refers to the 600-mile (965-kilometer) road connecting the 21 Spanish missions in California (formerly Alta California), along with a number of sub-missions, four presidios, and three pueblos, stretching at its southern end from the San Diego area Mission San Diego de Alcalá, all of the way up to the trail's northern terminus at Mission San Francisco Solano in Sonoma, just north of San Francisco Bay.

In earlier Spanish colonial times, any road under the direct jurisdiction of the Spanish crown and its viceroys was considered to be a camino real. Examples of such roads ran between principal settlements throughout Spain and its colonies such as New Spain. Most caminos reales had names apart from the appended camino real. Once Mexico won its independence from Spain, no road in Mexico, including California, was a camino real. The name was rarely used after that and was only revived in the American period in connection with the boosterism associated with the Mission Revival movement of the early 20th century.

The original route begins in Baja California Sur, Mexico, at the site of Misión de Nuestra Señora de Loreto Conchó, present day Loreto, (the first mission successfully established in Las Californias). Today, many streets throughout California that either follow or run parallel to this historic route still bear the "El Camino Real" name. Some of the original route has also been continually upgraded until it is now part of the modern California freeway system. The route is roughly traced by a series of commemorative bell markers. 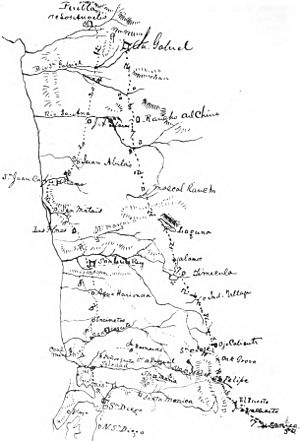 In Alta California (now the US state of California), El Camino Real followed two alternate routes, established by the first two Spanish exploratory expeditions of the region. The first was the Portolá Expedition of 1769. The expedition party included Franciscan missionaries, led by Junípero Serra. Starting from Loreto, Serra established the first of the 21 missions at San Diego. Serra stayed at San Diego and Juan Crespí continued the rest of the way with Gaspar de Portolá. Proceeding north, Portolá followed (as much as possible) the coastline (today's California State Route 1), except where forced inland by coastal cliffs.

Eventually, the expedition was prevented from going farther north by the entrance to San Francisco Bay, the Golden Gate. Crespí identified several future mission sites which were not developed until later. On the return trip to San Diego, Gaspar de Portolá found a shorter detour around one stretch of coastal cliffs via Conejo Valley.

The second Juan Bautista de Anza expedition (1775–76), entering Alta California from the southeast (crossing the Colorado River near today's Yuma, Arizona) picked up Portolá's trail at Mission San Gabriel. De Anza's scouts found easier traveling in several inland valleys, rather than staying on the rugged coast. On his journey north, de Anza traveled the San Fernando Valley and Salinas Valley. After detouring to the coast to visit the Presidio of Monterey, de Anza went inland again, following the Santa Clara Valley to the southern end of San Francisco Bay and on up the east side of the San Francisco Peninsula. This became the preferred route (roughly today's U.S. Route 101), and more closely corresponds to the officially recognized El Camino Real.

To facilitate overland travel, mission settlements were approximately 30 miles (48 kilometers) apart, so that they were separated by one long day's ride on horseback along the 600-mile (966-kilometer) long El Camino Real (Spanish for "The Royal Highway," though often referred to in the later embellished English translation, "The King's Highway"), and also known as the California Mission Trail. Heavy freight movement was practical only via water. Tradition has it that the padres sprinkled mustard seeds along the trail to mark the windings of the trail's northward progress with bright yellow flowers, creating a golden trail stretching from San Diego to Sonoma. The Camino Real provided a vital interconnecting land route between the 21 Spanish missions of Alta-California.

Valuable seeds were brought to California also marking the Camino Real de Tierra Adentro with trees for different uses. For example, ash trees were the marker for where a spring was to be found—as seen to this day at the Church of our Lady’s Transit, in Fresnillo ("Little Ash Tree"), Zacatecas. 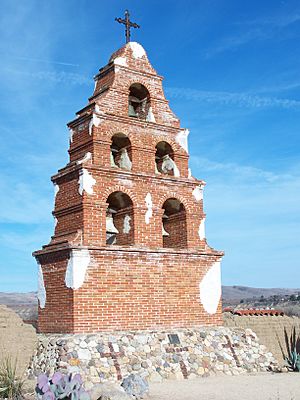 Today, several modern highways cover parts of the historic route, though large sections are on city streets (for instance, most of the stretch between San Jose and San Francisco). Its full modern route, as defined by the California State Legislature, is as follows:

Some older local roads that parallel these routes also have the name. Many streets throughout California now bear the name of this famous road, often with little factual relation to the original; but Mission Street in San Francisco does correspond to the historical route. A surviving, unpaved stretch of the old road has been preserved just east of Mission San Juan Bautista; this section of road actually runs parallel to the line of the San Andreas Fault, which can be clearly seen because the ground drops several feet.

Today the route through San Mateo and Santa Clara counties is designated as State Route 82, and some stretches of it are named El Camino Real. The old road is part of the de Anza route, located a few miles east of Route 101. 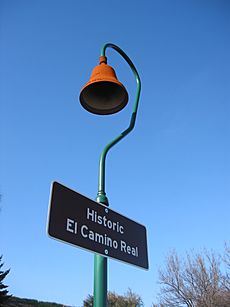 In 1892, Anna Pitcher of Pasadena, California initiated an effort to preserve the as-yet uncommemorated route of Alta California's Camino Real, an effort adopted by the California Federation of Women's Clubs in 1902. Modern El Camino Real was one of the first state highways in California. Given the lack of standardized road signs at the time, it was decided to place distinctive bells along the route, hung on supports in the form of an 11-foot (3.4 m) high shepherd's crook, also described as "a Franciscan walking stick". The bells were designed by Mrs ASC Forbes, who also owned the California Bell Company where they were cast. The first of 450 bells were unveiled on August 15, 1906, at the Plaza Church in the Pueblo near Olvera Street in Los Angeles.

The original organization which installed the bells fragmented, and the Automobile Club of Southern California and associated groups cared for the bells from the mid-1920s through 1931. The State took over bell maintenance in 1933. Most of the bells eventually disappeared due to vandalism, theft or simple loss due to the relocation or rerouting of highways and roads. After a reduction in the number of bells to around 80, the State began replacing them, at first with concrete, and later with iron. A design first produced in 1960 by Justin Kramer of Los Angeles was the standard until the California Department of Transportation (Caltrans) began a restoration effort in 1996.

Keith Robinson, Principal Landscape Architect at Caltrans developed an El Camino Real restoration program which resulted in the installation of 555 El Camino Real Bell Markers in 2005. The Bell Marker consists of a 460 mm diameter cast metal bell set atop a 75 mm diameter Schedule 40 pipe column that is attached to a concrete foundation using anchor rods. The original 1906 bell molds were used to fabricate the replacement bells. The replacement and original bells were produced by the California Bell Company, and are most typically marked 1769 & 1906, and include a designer's copyright notice. The two dates represent the date of the founding of the first Alta-California mission in San Diego, and the date of the setting of the first commemorative bell-marker, respectively.

For some indigenous populations, the bells are painful a symbol of dehumanization of their ancestors together with the domination and erasure of their culture. The Amah Mutsun Tribal Band shared with local authorities how the bells represent historical injustices and oppression of their people. In response, a bell at the University of California, Santa Cruz was removed by campus officials in June 2019. The issue was also present when the statues of Junípero Serra were damaged and/or removed in 2020 during the George Floyd protests which expanded to include monuments of individuals associated with the controversy over the genocide of indigenous peoples in the Americas. The historical preservation commission of Santa Cruz reported to the city council in November 2020 that the bells represent a painful history for the indigenous people of the city. A bell in Mission Park Plaza had been stolen in 1999 and not replaced. Removal of the last bell in the city at a street intersection was under consideration.

All content from Kiddle encyclopedia articles (including the article images and facts) can be freely used under Attribution-ShareAlike license, unless stated otherwise. Cite this article:
El Camino Real (California) Facts for Kids. Kiddle Encyclopedia.