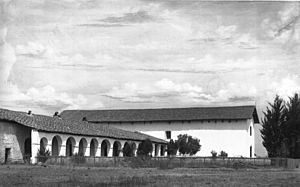 Mission San Miguel Arcángel is a Spanish mission in San Miguel, San Luis Obispo County, California. It was established on July 25, 1797 by the Franciscan order, on a site chosen specifically due to the large number of Salinan Indians that inhabited the area, whom the Spanish priests wanted to evangelize.

The mission remains in use as a parish church of the Diocese of Monterey. After being closed to the public for six years due to the 2003 San Simeon earthquake, the church reopened on September 29, 2009. Inside the church are murals designed by Esteban Munras.

The mission was put on the National Register of Historic Places in 1971 and was named to a National Historic Landmark in 2006. Of California's missions, it is one that retains more than most of its layout and buildings, including a portion of its neophyte village.

Father Fermín Lasuén and Father Buenaventura Sitjar founded the mission on July 25, 1797, making it the sixteenth California mission. Its location between Mission San Luis Obispo and Mission San Antonio de Padua provided a stop on the trip that had previously taken two days. A temporary wooden church was built with living quarters. The site was chosen as it was close to a Salinan Indian village called Vahca. In 1798 the small chapel was replaced. From 1816 to 1818 a new church was constructed with a tile roof and courtyard.

Mission San Miguel Arcángel land was sold off after the Mexican secularization act of 1833. The William Reed family lived in the buildings until 1848, when they were murdered by a band of thieves. Padre Abella, the last Franciscan at San Miguel, died in July, 1841.

In 1859 the U.S. government returned the mission to the Catholic Church. But with the buildings in poor condition, no priests were assigned to the mission; buildings were rented to some small businesses. In 1878 the Church reactivated the mission, and Rev. Philip Farrelly took up residence as First Pastor of Mission San Miguel. In 1928 the mission was returned to the Franciscan Padres, the same group who had founded the mission in 1797.

Bells were vitally important to daily life at any mission. The bells were rung at mealtimes, to call the Mission residents to work and to religious services, during births and funerals, to signal the approach of a ship or returning missionary, and at other times; novices were instructed in the intricate rituals associated with the ringing the mission bells.

All content from Kiddle encyclopedia articles (including the article images and facts) can be freely used under Attribution-ShareAlike license, unless stated otherwise. Cite this article:
Mission San Miguel Arcángel Facts for Kids. Kiddle Encyclopedia.