The Rios-Caledonia Adobe is a California Historical Landmark (#936) and is on the National Register of Historic Places. It is an adobe dwelling built in 1835, located in San Miguel, California, in San Luis Obispo County.

Petronilo Rios, corporal commanding the Mission San Miguel guard and later owner of Rancho Paso de Robles, supervised the building of the two-story adobe home using Native American labor on property belonging to Mission San Miguel (which is now across the street). In 1846, when the mission property was sold by Governor Pio Pico, Rios and William Reed purchased the mission and adobe.

The original building was made of adobe, had a roof of hand-made tiles, and used strips of rawhide to tie the pine rafters in place. The Rios family used the home as a residence until Warran C. Rickard purchased it from the state on a possessory claim. 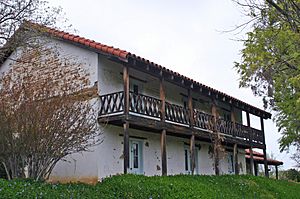 From 1868 until 1886, George Butchart operated the building as the Caledonia Inn, a stagecoach stop, hotel, and tavern on El Camino Real. The arrival of the Southern Pacific Railroad in San Miguel put an end to the Inn. In 1887, it served briefly as an elementary school. After that, it was used for various businesses (including a mattress factory and tailor shop from 1889 to 1895) and again as a home from 1895 to 1910 for various families.

Charles Dorries purchased the property with 6 acres (24,000 m2) of land in 1923 and restored it to use as a tourist attraction. Dorries also built the gift shop in a similar style in 1938 specifically to serve visitors.

By 1964 the adobe had fallen into disrepair. That year, the County of San Luis Obispo purchased it. In 1968, the Friends of the Adobes formed to preserve and restore the adobe. 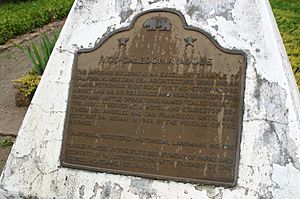 Major restoration work completed in 1972, and the building was then formally dedicated. A museum and gift shop opened in June 1978, also opening the adobe for tours.

The site is now operated as a county park.

All content from Kiddle encyclopedia articles (including the article images and facts) can be freely used under Attribution-ShareAlike license, unless stated otherwise. Cite this article:
Rios-Caledonia Adobe Facts for Kids. Kiddle Encyclopedia.