Santa Clara County, California, officially the County of Santa Clara, is a county in the U.S. state of California. As of the 2010 census, the population was 1,781,642. The county seat is San Jose, the tenth-most populous city in the United States. 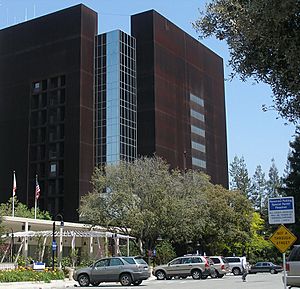 The Santa Clara County government center in May 2006

Santa Clara County is named after Mission Santa Clara, which was established in 1777, and is also named for Saint Clare of Assisi.

Santa Clara County was one of the original counties of California, formed in 1850 at the time of statehood. The original inhabitants included the Ohlone, residing on Coyote Creek and Calaveras Creek. Part of the county's territory was given to Alameda County in 1853.

In the early 20th Century, the area was promoted as the "Valley of the Heart's Delight" due to its natural beauty, including a significant number of orchards.

The first major technology company to be based in the area was Hewlett-Packard, founded in a garage in Palo Alto in 1939. IBM selected San Jose as its West Coast headquarters in 1943. Varian Associates, Fairchild Semiconductor, and other early innovators were located in the county by the late 1940s and 1950s. The U.S. Navy had a large presence in the area and began giving large contracts to Silicon Valley electronics companies. The term "Silicon Valley" was coined in 1971. The trend accelerated in the 1980s and 1990s, and agriculture has since then been nearly eliminated from the northern part of the county. Today, Santa Clara County is the headquarters for approximately 6500 high technology companies, including many of the largest tech companies in the world, among them hardware manufacturers AMD, Cisco Systems and Intel, computer and consumer electronics companies Apple Inc. and Hewlett-Packard, and internet companies eBay, Facebook, Google and Yahoo!. Most of what is considered to be Silicon Valley is located within the county, although some adjoining tech regions in San Mateo, Alameda, and Santa Cruz counties are also considered a part of Silicon Valley.

The San Andreas Fault runs along the Santa Cruz Mountains in the south and west of the county. 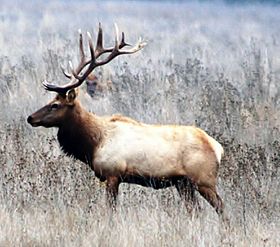 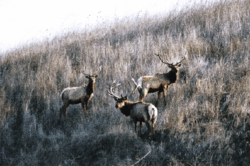 Three tule elk just north of U. S. Highway 101 in Basking Ridge Park. The freeway is a barrier to elk migration to the Coast Range. Courtesy Craige Edgerton

In 1978, California Department of Fish and Game warden Henry Coletto urged the department to choose the Mount Hamilton area as one of California's relocation sites under a new statewide effort to restore tule elk (Cervus canadensis ssp. nannodes). While other ranchers refused, tech pioneers Bill Hewlett and David Packard allowed Coletto and state biologists to translocate 32 tule elk from the Owens Valley in the eastern Sierra onto the 28,000-acre (11,000 ha) San Felipe Ranch, which the families jointly own, in the hills east of Morgan Hill. From the three original 1978-1981 translocations to the Mount Hamilton region of the Diablo Range, there are multiple herds in different locations including the Isabel Valley, San Antonio Valley, Livermore area, San Felipe Ranch, Metcalf Canyon, Coyote Ridge, Anderson Lake, and surrounding areas. As of 2012[update], an estimated 400 tule elk roam 1,875 square kilometres (724 sq mi) in northeastern Santa Clara County and southeastern Alameda County.

As of 1980[update], Santa Clara County has the highest number of Superfund Sites of any county in the United States, accounting for 25 polluted locations requiring a long-term response to clean up hazardous material contaminations. The vast majority of these Superfund sites were caused by firms associated with the high tech sector located in Silicon Valley.

As of 2013, Santa Clara County has the highest median household income of any county in California at $84,741. 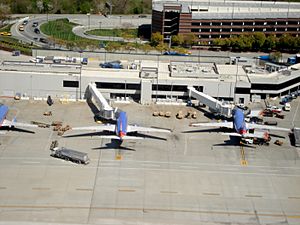 The county's main airport is Norman Y. Mineta San José International Airport (SJC). It is a U.S. Customs and Border Protection port of entry and as of 2016 has eight international routes (one to Canada, one to England, one to Germany, one to Japan, two to Mexico, and two to China) but the airport's busiest routes are all to cities in the western United States. San Francisco International Airport (SFO) is also often used for commercial services by residents of Santa Clara County. 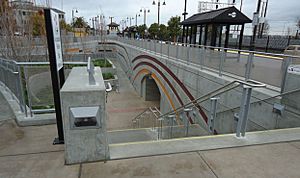 The county has an extensive freeway system and a separate expressway system. Expressways in California are distinct from freeways; although access to adjoining properties is eliminated, at-grade intersections are allowed. However, unlike expressways virtually everywhere else in California, the Santa Clara County expressways were built, signed, and maintained as county roads; they are not maintained by Caltrans, although they are patrolled by the California Highway Patrol.

There is also a large street network dominated by four- and six-lane arterials. Some of the newer boulevards (primarily in the West Valley) are divided with landscaped medians.

The county has no commercial seaports, although small boats can access San Francisco Bay from several points. Like many other Bay Area counties, it is dependent upon the Port of Oakland for transport of ocean cargo.

Santa Clara County has an extensive park system, much of it founded in the major park expansion of the late 1970s. Parks within the county include:

To promote friendship and understanding and to build bridges with countries of origin for various ethnic populations in the county, the County of Santa Clara has created a Sister County Commission to coordinate the program. As of 2009, there are three sister counties:

The population ranking of the following table is based on the 2010 census of Santa Clara County.

All content from Kiddle encyclopedia articles (including the article images and facts) can be freely used under Attribution-ShareAlike license, unless stated otherwise. Cite this article:
Santa Clara County, California Facts for Kids. Kiddle Encyclopedia.