San Mateo County ( SAN mə-TAY-oh; Spanish for "Saint Matthew") is a county located in the U.S. state of California. As of the 2010 census, the population was 718,451. The county seat is Redwood City.

San Mateo County was formed in 1856 after San Francisco County, one of the state's 18 original counties since California's statehood in 1850, was split apart. Until 1856, San Francisco's city limits extended west to Divisadero Street and Castro Street, and south to 20th Street. In response to the lawlessness and vigilantism that escalated rapidly between 1855 and 1856, the California government decided to divide the county. A straight line was then drawn across the tip of the San Francisco Peninsula just north of San Bruno Mountain. Everything south of the line became the new San Mateo County while everything north of the line became the new consolidated City and County of San Francisco, to date the only consolidated city-county in California. The consolidated city-county of San Francisco was formed by a bill introduced by Horace Hawes, signed by the governor on 19 April 1856. San Mateo County was officially organized on 18 April 1857 under a bill introduced by Senator T.G. Phelps. The 1857 bill defined the southern boundary of San Mateo County as following the south branch of San Francisquito Creek to its source in the Santa Cruz Mountains and thence due west to the Pacific Ocean, and named Redwood City as the county seat. San Mateo County then annexed part of northern Santa Cruz County in March 1868, including Pescadero and Pigeon Point.

San Mateo County bears the Spanish name for Saint Matthew. As a place name, San Mateo appears as early as 1776 and several local geographic features were also designated San Mateo on early maps including variously: a settlement, an arroyo, a headland jutting into the Pacific (Point Montara), and a large land holding (Rancho San Mateo). Until about 1850, the name appeared as San Matheo.

According to the U.S. Census Bureau, the county has a total area of 741 square miles (1,920 km2), of which 448 square miles (1,160 km2) is land and 293 square miles (760 km2) (40%) is water. It is the third-smallest county in California by land area. A number of bayside watercourses drain the eastern part of the county including San Bruno Creek and Colma Creek. Streams draining the western county include Frenchmans Creek, Pilarcitos Creek, Naples Creek, Arroyo de en Medio, and Denniston Creek. These streams originate along the northern spur of the Santa Cruz Mountains that run through the county. The northern and north-east parts of the county are very heavy densely populated with largely urban and suburban areas, with many of its cities as edge-cities for the Bay Area, whilst the deep south and the west central parts of the county are less heavy densely populated with more rural environment and coastal beaches areas.

The county is home to several endangered species including the San Francisco garter snake and the San Bruno elfin butterfly, both of which are endemic to San Mateo County. The endangered California clapper rail is also found on the shores of San Francisco Bay, in the cities of Belmont and San Mateo. The endangered wildflower Hickman's potentilla is found near the Pacific Ocean on the lower slopes of Montara Mountain. The endangered wildflowers White-rayed pentachaeta, Pentachaeta bellidiflora, San Mateo Woolly Sunflower, Eriophyllum latilobum, Marin Dwarf Flax, Hesperolinon congestum and the San Mateo Thornmint, Acanthomintha duttonii, are found in the vicinity of the Crystal Springs Reservoir.

In May 2014, a California condor was spotted near Pescadero, a coastal community south of San Francisco—it was the first California condor spotted in San Mateo County since 1904. The Condor, tagged with the number "597," and also known as "Lupine", is one of 439 condors living in the wild or captivity in California, Baja California and Arizona. The three-year-old female flew more than 100 miles (160 km) north from Pinnacles National Park, in San Benito County, on May 30, and landed on a private, forested property near Pescadero, on the San Mateo County Coast, where it was photographed by a motion-activated wildlife camera. Harold Heath, Professor Emeritus, of Stanford University was responsible for the 1904 sighting, 1 mile (1.6 km) west of the University campus.

San Mateo County had one of the largest Tongan communities outside of Tonga, with an estimated 13,000 Tongan Americans. 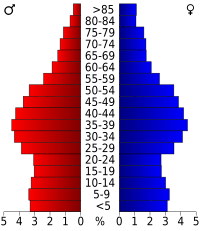 Caltrain, the commuter rail system, traverses the county from north to south, running alongside the Highway 101 corridor for most of the way.

Caltrain, BART, and SamTrans converge at the Millbrae Intermodal station.

San Francisco International Airport is geographically located in San Mateo County, but it is owned and operated by the City and County of San Francisco.

The only deepwater port in South San Francisco Bay is the Port of Redwood City, situated along Redwood Creek, originally created as a lumber embarcadero in 1850. The San Mateo Harbor Harbor District manages the Pillar Point Harbor and Oyster Point Marina. Ferry connections connect Oyster Point to Jack London Square in Oakland and the Alameda Ferry Terminal in Alameda.

There are a number of well known structures within San Mateo County:

The population ranking of the following table is based on the 2010 census of San Mateo County.

All content from Kiddle encyclopedia articles (including the article images and facts) can be freely used under Attribution-ShareAlike license, unless stated otherwise. Cite this article:
San Mateo County, California Facts for Kids. Kiddle Encyclopedia.