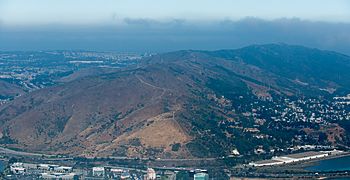 Aerial view of San Bruno Mountain from the east. The buildings on the mountainside on the right are part of Brisbane.

The mountain provides habitat for several species of rare and endangered plants and butterflies. The endangered San Bruno elfin butterfly inhabits this mountain and a few other locations. The distinct Franciscan fog zone plants of San Bruno Mountain set it apart from other California coastal areas.

The Portola expedition visited San Francisco Bay in 1769. The expedition is usually considered the first European presence in the area. Five years later Fernando Rivera and four soldiers climbed the mountain and watched sunrise across the bay. The mountain was named by Bruno de Heceta for his patron saint.

San Bruno Mountain consists of portions of five Mexican land grants; the southernmost being Rancho Buri Buri. Jose Antonio Sanchez, who rode by mule as a child from Sonora, was given Rancho Buri Buri in 1827, with confirmation in 1835. Rancho Buri Buri extended from the bay salt flats to San Andreas Valley and from Colma to Burlingame. Rancho Canada de Guadalupe la Visitacion y Rodeo Viejo contained most of the present day San Bruno Mountain; this rancho contains the city of Brisbane, Guadalupe Valley, Crocker Industrial Park, Visitacion Valley and the old rodeo grounds by Islais Creek. In 1835 this rancho was granted to Jacob P. Leese. In 1884 banker Charles Crocker acquired core holdings of this rancho amounting to 3,997 acres (1,618 ha) from Leese's successors, and that land devolved to the Crocker Estate Company, who are the present day owners of San Bruno Mountain. Three other ranchos held minor portions of the northern flank of San Bruno Mountain. 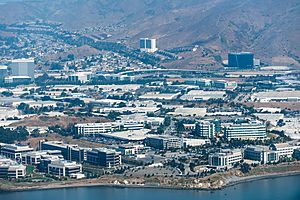 The Terra Bay project was approved in the mid-1980s for development at the south and southeast base of San Bruno Mountain. Terra Bay was constructed in three phases: the first phase constructed townhomes and detached houses; the second phase constructed more housing units, including the one of the tallest buildings in South San Francisco, a condominium tower named the Peninsula Mandalay, and the third phase constructed an office building named Centennial Towers. The original developer, W.W. Dean & Associates, was unable to complete the project, and SunChase Holdings acquired the project in 1992, completing site preparation before selling the parcels for Phase I to Centex Homes.

The Terra Bay site was known to include habitat for the Mission blue and Callippe silverspot butterflies; the original developer received a US$15,000 ($32,000 in 2022) fine in 1983 for bulldozing part of the habitat during site preparation. partly in order to establish a buffer zone between the development and an ancient shellmound. 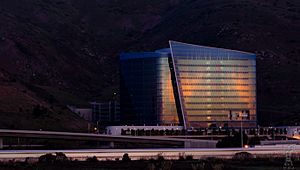 Although the shellmound had been noted as early as 1909, a sample of 22 cubic metres (780 cu ft) of the shellmound conducted in 1989 by Holman & Associates (commissioned by W.W. Dean) revealed the massive shellmound contained human remains, and further, that the shellmound site is eligible for nomination to the National Register of Historic Places. The Holman & Associates report was not made public for nearly ten years, with leaked copies circulating privately in 1997, and a public copy incorporated in the draft Environmental Impact Report in 1998. A lawsuit was settled out of court, resulting in the developer selling the land which included the shellmound and habitat for the Mission blue and Callippe silverspot butterflies to The Trust for Public Land, who would incorporate the parcel into San Bruno Mountain State Park. Ultimately, Terra Bay Phase III was scaled back significantly from the original mixed-use retail/office proposal. The shorter 12-story south tower was completed in 2009, and the taller 21-story north tower is scheduled for completion at the end of 2016. 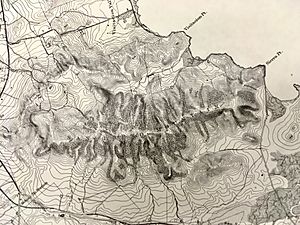 Topographic rendering done in 1869 showing trees in the ravines

The name "San Bruno Mountains" was first affixed by the Geological Survey of California in 1865, describing the place as a short range extending from Sierra Point nearly to the Pacific Ocean. The mountain itself actually consists of two parallel northwest trending ranges separated by the Guadalupe Valley. These two ranges are united by a saddle at the northern end of Colma Canyon. The northernmost range attains a peak of 850 feet (259 m), while the southern range rises abruptly from Merced Valley at the south to reach Radio peak in a horizontal distance of only 0.8 miles (1.3 km). This southern range is often referred to as San Bruno Mountain, while the northern range is called the Crocker Hills.

The region is drained by two major streams: Guadalupe Valley Creek flowing through Guadalupe Valley, and Colma Creek from a source in San Bruno Mountain State and County Park into the deep cleft of Colma Canyon and thence into Merced Valley.

In the 1850s San Francisco Bay lapped against the eastern sandstone cliff flank of San Bruno Mountain, whereas today the entire shoreline is bay fill.

These two mountains are underlain primarily with late Cretaceous dark greenish-gray graywacke, a poorly sorted sandstone containing angular rock fragments, about ten percent feldspar and detrital chert. The angular unsorted content implies a rapid erosion and burial in a depositional basin, with an outcome of few fossils. Exposed graywacke can be observed on high ridges and on the steep canyon walls. Radiolarian chert is exposed on certain south facing slopes of San Bruno Mountain and at Point San Bruno. 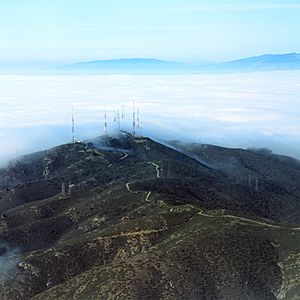 The most important rock type is serpentine, a greenish soft material that is the California State Rock. Outcrops of this rock are found near Serbian Ravine and at Point San Bruno. Serpentine's importance is its unusual and diverse mineral composition which imparts to associate soils the ability to host rare plants, not usually supported on common soils. Therefore, San Bruno Mountain is a habitat for a variety of uncommon plants, which in turn host even rarer animal life.

Since the climate is dominated by marine air flow, temperatures are milder in the winter and summer on these mountains. Furthermore, summer temperatures are further reduced by the annual appearance of marine fog enshrouding the mountains most mornings between late June and late August; this fog is particularly pronounced on the western slopes. Minimum credible temperature might extend as low as 20 °F (−7 °C) in the sheltered valleys. Winds are higher than on reference locations at surrounding points; in fact, on ridges it is not uncommon for the most fierce winter storms to produce gusts from 50 to 80 miles per hour (80 to 129 km/h). Precipitation is similar to surrounding cities, or about 22 inches (560 mm) per-annum, with approximately 66 days-per-annum realizing perceptible rain. On several occasions the mountain has been temporarily covered by snow, including December 1932, January 1952, January 1957, January 1962, February 5, 1976, February 26, 2011, and February 5, 2019.

There are a variety of habitats in this mountainous area, and notably the following rare or endangered flora:

All content from Kiddle encyclopedia articles (including the article images and facts) can be freely used under Attribution-ShareAlike license, unless stated otherwise. Cite this article:
San Bruno Mountain Facts for Kids. Kiddle Encyclopedia.