The Santa Cruz Mountains, part of the Pacific Coast Ranges, are a mountain range in central and northern California, United States. They form a ridge down the San Francisco Peninsula, south of San Francisco. They separate the Pacific Ocean from the San Francisco Bay and the Santa Clara Valley, and continue south to the Central Coast, bordering Monterey Bay and ending at the Salinas Valley. The range passes through the counties of San Mateo, Santa Clara, Santa Cruz, San Benito and Monterey, with the Pajaro River forming the southern boundary.

The northernmost portion of the Santa Cruz Mountains, north of Half Moon Bay Road (SR 92), is known as Montara Mountain; the middle portion is the Sierra Morena, which includes a summit called Sierra Morena, and extends south to a gap at Lexington Reservoir; south of the gap, the mountain range is known as the Sierra Azul.

For much of the San Francisco Peninsula, State Route 35 (SR 35) runs along the ridge, and is known as "Skyline Boulevard", while Interstate 280 runs east of the ridges. The major routes across the mountains are (from north to south): SR 92 from Half Moon Bay to San Mateo, SR 84 from San Gregorio to Redwood City, SR 9 from Santa Cruz to Saratoga, SR 17 from Santa Cruz to Los Gatos, SR 152 from Watsonville to Gilroy, SR 129 from Watsonville to San Juan Bautista, and US Highway 101 from Salinas to Gilroy. Meanwhile, SR 1 runs parallel to the mountains from Daly City to Castroville while SR 85 runs parallel from Cupertino to San Jose.

There are over 30 wineries located in this region and the Santa Cruz Mountains have been a legally defined American Viticultural Area (AVA) since 1981. Wine has been produced here since at least the 1840s. The Santa Cruz Mountain AVA emerged as a premier producer of top wines as recognized in the historic Judgment of Paris wine competition on May 26, 1976.

The Santa Cruz Mountains are largely the result of compressive uplift caused by a leftward bend of the San Andreas Fault. The Salinian Block basement rocks are overlain by Miocene rock strata of the Lompico Sandstone, the Vaqueros Sandstone and the Santa Margarita Formation. 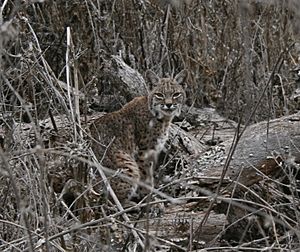 Bobcat in wintertime, at Almaden-Quicksilver Park 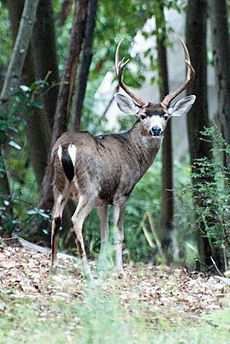 A deer in Ben Lomond

The area welcomes a tremendous number of species of birds. (see: bird list). Black-tailed deer, a subspecies of mule deer are common, as are western gray squirrels, chipmunks and raccoons. Periodic sightings of black bears indicate they frequent the mountains or wander north from Big Sur, where black bears are established . Foxes, coyotes, bobcats, cougars and human-introduced Virginia opossums also inhabit the region but are rarely seen. Rattlesnakes are also inhabitants, mostly in the high, dry chaparral. 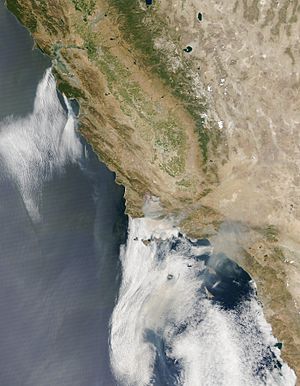 Red outlines mark the locations of the Lockheed Fires in the Santa Cruz Mountains. 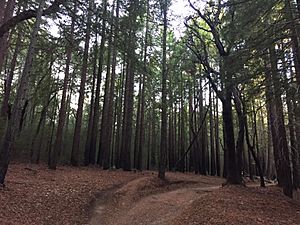 The Santa Cruz Mountains have a Mediterranean type climate typical of most of California, with the majority of the annual precipitation falling between November and April. According to the National Weather Service, this totals more than 50 inches (127 cm) annually. Heavy summer fogs frequently cover the western ocean-facing slopes and valleys, resulting in drizzle and fog drip caused by condensation on the redwoods, pines, and other trees, which sustains the moisture-loving redwood forests. Due to a rain shadow effect, precipitation on the eastern side of the range is significantly less, about 25 inches (64 cm) a year. Snow falls a few times a year on the highest ridges, and more rarely the higher valleys receive light dustings.

The Santa Cruz Mountains are subject to sharp diurnal temperature fluctuations. The highs and low within a 24-hour period are ~20–30 °F apart on average but can be as much as 50 °F apart during heat waves depending on location. There is also considerable variation in temperature from day to day in both summer and winter with shifting wind directions, and fluctuations in the degree or marine influence.

Thermal inversions occur primarily during the Winter when cool air sinks and gets trapped in the valleys at night, often leading to frost and occasional freezes. Higher elevations above the inversion layer usually stay mild with frost being a rare occurrence. The USDA has recently re-classified the hardiness zones for the higher elevations as USDA 10a to 10b to reflect the lack of frost at those locations. However, while the higher elevations are less prone to frost, they are also more likely to experience occasional snow accumulations. The valleys in contrast are rated USDA 9b with some locations as cold as 9a due to the lack of cold air drainage.

Summer temperatures regularly reach highs in the 80s °F (~28–30 °C) with nighttime usually in the upper 40s to lower 60s °F (~9–18 °C) depending on elevation, distance from the ocean and degree of marine inversion present. Summer weather is dominated by a persistent Marine layer that can vary in depth. When the inversion layer drops below 300–500 feet, the higher elevations are deprived of marine influence and will often be subject to intense heat waves with daytime temperatures in the 95-105F (~35–40 °C) range and extreme low humidity with elevated overnight lows that offer little relief from the heat. Such conditions can lead to fires that can occur even before the official State of California fire season starts in the Fall. Examples of such fires include the 2016 Loma Fire, the 2009 Lockheed Fire and the Summit Fire in 2008 . 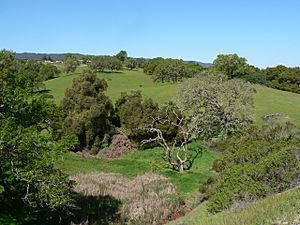 A ranch in the foothills, north of Sand Hill Road, west of Interstate 280. 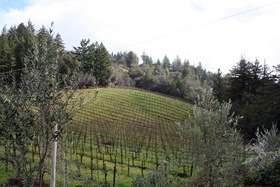 Vineyard in the Santa Cruz Mountains

The previous historic Old Almaden Winery was located on the eastern slopes of the Santa Cruz Mountains. It was the first commercial winery in California, planting high quality European (French) varietal vines.

Film director Alfred Hitchcock and his wife Alma had their primary residence, the Cornwall Ranch, near Scotts Valley, purchased in September 1940.

In 1965, science fiction author Robert A. Heinlein constructed a home in Bonny Doon, and lived there until shortly before his death in 1988.

From 1970 to 2014, singer-songwriter Neil Young lived at Broken Arrow Ranch near Woodside with his family. Many of his tracks from this time were recorded at the ranch.

All content from Kiddle encyclopedia articles (including the article images and facts) can be freely used under Attribution-ShareAlike license, unless stated otherwise. Cite this article:
Santa Cruz Mountains Facts for Kids. Kiddle Encyclopedia.