Redwood City is a city on the San Francisco Peninsula in Northern California's Bay Area, approximately 27 miles (43 km) south of San Francisco, and 24 miles (39 km) northwest of San Jose. Redwood City's history spans its earliest inhabitation by the Ohlone people to being a port for lumber and other goods. The county seat of San Mateo County, it is the home of several technology companies such as Box, Oracle, Evernote, Wealthfront, and Electronic Arts. At the 2010 census, the city had a population of 76,815. The Port of Redwood City is the only deepwater port on San Francisco Bay south of San Francisco. Redwood City is the location of the San Mateo County Jail, for both women and men. The Malibu Grand Prix long time landmark was recently demolished along with the city's only Mini Golf, Go-Kart, Video Game Arcade, and Batting Cages. Malibu Grand Prix's previous location is currently the construction site of a new additional Jail and Inmate housing facility. The city has a motto "Climate Best By Government Test" which is a reference to it being one of the top German scouted scientific climates and the city was one of the locations mapped by them during their testing and data collection. The Hetch Hetchy water pipeline runs through Redwood City and supplies a vast majority of the surrounding area with low grain (+/− 3 grains) rated water.

According to the United States Census Bureau, the city has an area of 34.7 square miles (90 km2), of which 19.4 square miles (50 km2) is land and 15.2 square miles (39 km2) (43.91%) is water. A major watercourse draining much of Redwood City is Redwood Creek, to which several significant river deltas connect, the largest of which is Westpoint Slough.

Redwood City's sphere of influence includes the districts of Emerald Lake Hills and North Fair Oaks, which, however, are largely outside the city boundaries and are counted individually for the U.S. census. Palomar Park, just north of Emerald Hills and east of San Carlos' Crestview area, is another Redwood City neighborhood that is formally part of unincorporated San Mateo County. The northern neighborhood of Redwood Shores is part of Redwood City, although it is not possible to travel by road from one to the other without passing through the neighboring city of San Carlos, or through Belmont via unincorporated San Mateo County. Although Redwood City has a large middle class, the south eastern section of Redwood City highly resembles working class North Fair Oaks in demographic make-up and income level.

There were 27,680 households out of which 31.5% had children under the age of 18 living with them, 44.4% were married couples living together, 14.7% had a female householder with no husband present, and 40.2% were non-families. 31.5% of all households were made up of individuals and 6.3% had someone living alone who was 65 years of age or older. The average household size was 4.62 and the average family size was 4.80. 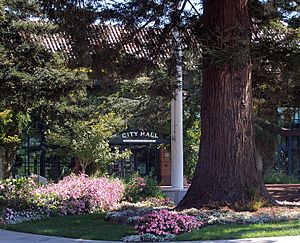 In an attempt to revitalize Redwood City's downtown, city officials decided to look into development. In February 1999 the San Mateo County History Museum opened inside the old San Mateo County Courthouse in downtown Redwood City. In August 2006, a 20-screen theater and various shops opened in a prime downtown location. The theater complex boasts restaurant and retail space at street level and a 2-level underground parking structure.

In addition to the new 20-screen theater, major improvements were made to the historical courthouse located on Broadway. In the late '30s an addition was built in front of the original structure, obscuring the view. It was torn down as part of the revitalization project. The building has been replaced with a large courtyard flanked by water fountains on either side, leading to the main steps of the courthouse. The courthouse's glass dome is lit at night and changes colors every 11 seconds. 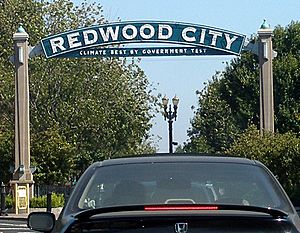 Redwood City's slogan, emblazoned on arches across Broadway at the east and west entrances to downtown, is "Climate Best By Government Test." This is based on a climatological survey conducted by the United States and German governments prior to World War I. The area centered on Redwood City tied for the world's best climate with the Canary Islands and North Africa's Mediterranean Coast.

Redwood City's Independence Day parade sponsored by the Peninsula Celebration Association, held continuously since 1939, has been billed variously as 'The largest Independence Day Parade in California,' 'West of the Mississippi,' 'in North America,' claims which may or may not be accurate. The first verifiable written records of celebrations date to 1861, and to 1887 for a parade.

All content from Kiddle encyclopedia articles (including the article images and facts) can be freely used under Attribution-ShareAlike license, unless stated otherwise. Cite this article:
Redwood City, California Facts for Kids. Kiddle Encyclopedia.