The tree's pungent leaves have a similar flavor to bay leaves, though stronger, and it may be mistaken for bay laurel. The dry wood has a color range from blonde (like maple) to brown (like walnut). It is considered an excellent tonewood and is sought after by luthiers and woodworkers.

The tree is a host of the pathogen that causes sudden oak death. 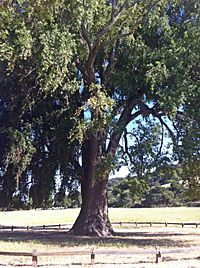 This tree, on Permanente Creek in Rancho San Antonio County Park, Santa Clara County, California, is one of the largest of its species in the state. Since this photograph, the tree was split, and half the tree broke off and fell in a storm. The other half is still thriving, and has more or less resumed the original canopy shape. 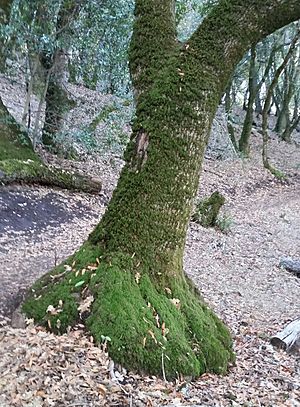 Lignotuber near ground level provides fire-resistant storage of energy and sprouting buds if fire damage requires replacement of the trunk or limbs.

This tree mostly inhabits redwood forests, California mixed woods, yellow pine forest, and oak woodlands. Bays occur in oak woodland close to the coast, and in northern California where moisture is sufficient, usually in or near riparian areas.

In the north, it reaches its distributional limit through southwest Oregon to (infrequently) Newport, Lincoln County, Oregon, on the coast, extending from there south through California to San Diego County. It is also found in the western foothills of the Sierra Nevada mountains. It occurs at altitudes from sea level up to 1600 m. An isolated, more northern occurrence of the species can be found in Tacoma, Washington, around Snake Lake near the Tacoma Nature Center. There are also two recorded instances of trees growing in coastal British Columbia. 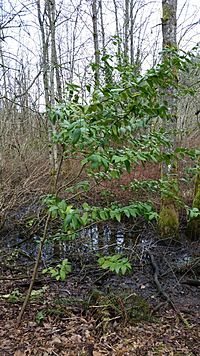 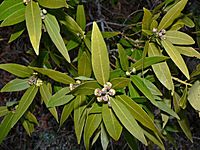 The leaves are entire and lance-shaped about 3–10 centimetres (1.2–3.9 in) long. They may substitute for the Mediterranean bay leaf in cooking.

The fragrant leaves are smooth-edged and lance-shaped, 3–10 cm long and 1.5–3 cm broad, similar to the related bay laurel, though usually narrower, and without the crinkled margin of that species.

The flowers are small, yellow or yellowish-green, produced in small umbels (hence the scientific name Umbellularia, "little umbel"). Unlike other "bay laurels" of the genus Laurus, Umbellularia has perfect flowers (male and female parts in the same flower).

The fruit, also known as "California bay nut", is a round and green berry 2–2.5 cm long and 2 cm broad, lightly spotted with yellow, maturing purple. Under the thin, leathery skin, it consists of an oily, fleshy covering over a single hard, thin-shelled pit, and resembles a miniature avocado. Umbellularia is in fact closely related to the avocado's genus Persea, within the family Lauraceae. The fruit ripens around October–November in the native range.

Umbellularia has long been valued for its many uses by Native Americans throughout the tree's range, including the Cahuilla, Chumash, Ohlone, Pomo, Miwok, Yuki, Coos, and Salinan people. The Concow tribe call the plant sō-ē’-bä (Konkow language).

Poultices of Umbellularia leaves were used to treat rheumatism and neuralgias. A tea was made from the leaves to treat stomach aches, colds, sore throats, and to clear up mucus in the lungs. The leaves were steeped in hot water to make an infusion that was used to wash sores. The Pomo and Yuki tribes of Mendocino County treated headaches by placing a single leaf in the nostril or bathing the head with a laurel leaf infusion.

The chemical responsible for the headache-inducing effects of Umbellularia is known as umbellulone.

Both the flesh and the inner kernel of the fruit have been used as food by Native Americans. The fatty outer flesh of the fruit, or mesocarp, is palatable raw for only a brief time when ripe; prior to this the volatile aromatic oils are too strong, and afterwards the flesh quickly becomes bruised, like that of an overripe avocado. Native Americans dried the fruits in the sun and ate only the lower third of the dried mesocarp, which is less pungent.

The hard inner seed underneath the fleshy mesocarp, like the pit of an avocado, cleaves readily in two when its thin shell is cracked. The pit itself was traditionally roasted to a dark chocolate-brown color, removing much of the pungency and leaving a spicy flavor. Roasted, shelled "bay nuts" were eaten whole, or ground into powder and prepared as a drink which resembles unsweetened chocolate. The flavor, depending on roast level, has been described variously as "roast coffee," "dark chocolate" or "burnt popcorn". The powder might also be used in cooking or pressed into cakes and dried for winter storage. It has been speculated that the nuts contain a stimulant; however this possible effect has been little documented by biologists.

Some modern-day foragers and wild food enthusiasts have adopted Native American practices regarding the edible roasted fruit, the bay nut.

Umbellularia californica is also used in woodworking. It is considered a tonewood, used to construct the backs and sides of acoustic guitars. The wood is very hard and fine, and is also made into bowls, spoons, and other small items and sold as "myrtlewood". It is also grown as an ornamental tree, both in its native area, and further north up the Pacific coast to Vancouver in Canada, and in western Europe. It is occasionally used for firewood.

According to a modern Miwok recipe for acorn soup, "it is essential that you add a generous amount of California laurel" when storing acorns to dry, to keep insects away from the acorns.

One popular use for the leaves is to put them between the bed mattresses to get rid of, or prevent, flea infestations.

The wood is used as lumber in furniture making, especially highly figured specimens.

"Myrtlewood" is the only wood still in use as a base "metal" for legal tender. During the 1933 "interregnum of despair" between Franklin Roosevelt's election and his inauguration, the only bank in the town of North Bend, Oregon—the First National—was forced to temporarily close its doors, precipitating a cash-flow crisis for the City of North Bend. The city solved this problem by minting its own currency, using myrtlewood discs printed on a newspaper press. These coins, in denominations from 25 cents to $10, were used to pay employees, with the city promising to redeem them for cash as soon as it became available.

However, when the bank reopened and the city appealed for people to bring their myrtlewood money in to redeem it, many opted to keep their tokens as collector's items. After several appeals, the city announced that the tokens would remain legal tender in the city of North Bend in perpetuity. The unredeemed tokens have become very valuable, because of scarcity and historical interest. Fewer than 10 full sets are believed to exist.

Umbellularia californica is a host of Phytophthora ramorum, the pathogen that causes the disease sudden oak death. It is important in this sense because it is one of two tree species (tanoak is the other) on which the pathogen readily produces spores.

All content from Kiddle encyclopedia articles (including the article images and facts) can be freely used under Attribution-ShareAlike license, unless stated otherwise. Cite this article:
Umbellularia Facts for Kids. Kiddle Encyclopedia.