Kids Encyclopedia Facts
Not to be confused with Bend, Oregon.

North Bend is a city in Coos County, Oregon, United States with a population of 9,695 as of the 2010 census. North Bend is surrounded on three sides by Coos Bay, an S-shaped water inlet and estuary where the Coos River enters Coos Bay and borders the city of Coos Bay to the south. North Bend became an incorporated city in 1903.

Before Europeans visited the Oregon coast, Native American tribes claimed the Coos Bay region as their homeland for thousands of years. Members of the Coos, Lower Umpqua, Siuslaw and Coquille tribes lived, fished, hunted and gathered along Coos Bay and its estuaries, along rivers, and in meadows and forests. 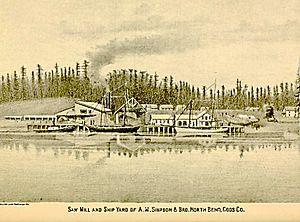 Approximately 400 years ago, British and Spanish explorers first approached the South Coast. In 1579 Sir Francis Drake is purported to have sought shelter for his ship, the Golden Hinde, around Cape Arago. Trader and explorer Jedediah Smith was in the region seeking furs and the Hudson's Bay Company sent Alexander Roderick McLeod to search for an inland passage.

The 1852 stranding of the schooner Captain Lincoln on the North Spit and the survivors' encampment and rescue brought attention to gold prospectors who came to mine placer from area beaches. In 1853 The Coos Bay Commercial Company arrived from the Rogue Valley and created routes for settlers.

Empire City was established and was the county seat of government until 1896. Entrepreneurs were drawn to the area's ample natural resources, and sawmills and shipyards at Old Town North Bend and Empire City spurred economic development and attracted workers. Rivers and sloughs provided a means to transport people, forest, agricultural and coal products, and towns provided hubs for inland transportation. Some of the early industries in the area included timber harvesting, shipbuilding, farming, coal mining and salmon canning.

Prior to around 1915, The Coos region was largely isolated from the rest of Oregon due to difficulties in crossing the Coast Range and fording rivers, and the Pacific Ocean was used to link people to other areas, including San Francisco, which was an easier two-day trip compared to traveling inland over rugged terrain. In 1916 trains were established that linked the region to other interior settlements and towns, which increased commercial trade and tourism 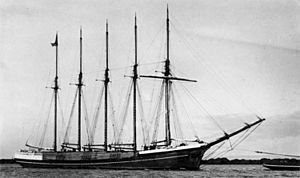 Schooner K.V. Kruse, built in 1920 by Kruse and Banks in North Bend, Oregon

Shipyards contracted with the U.S. Government to build minesweepers and rescue tugs for World War II defense purposes. Large national lumber companies set up operations and expanded significantly for the next two decades. Jetty improvements, commercial fishing and crabbing shaped the development of Charleston. The completion of the North Bend Bridge (now McCullough Memorial Bridge) in 1936 and the Roosevelt Highway significantly improved modern transportation connections and provided the final link in opening the Coos region to the outside world. The formerly remote district known as the Coos Bay country had come of age.

During the interregnum of despair between Franklin Roosevelt's election and his inauguration, the only bank in North Bend, the First National, was forced to temporarily close its doors, precipitating a cash-flow crisis for the City of North Bend. The city solved this problem by minting currency using myrtlewood discs printed on a newspaper press. These coins, in denominations from 25 cents to $10, were used to make payroll and the city promised to redeem them for cash as soon as it became available.

However, when the bank reopened and the city appealed for people to bring their myrtlewood money in to redeem it, many opted to keep their tokens as collector's items. After several appeals, the city gave up and announced that the tokens would remain legal tender in the city of North Bend in perpetuity. Until the 1960s, people occasionally did cash in their tokens, but the remaining pieces have become very valuable through scarcity and historical interest. Fewer than 10 full sets are believed to exist.

The climate in North Bend and surrounds can be described as a very humid version of the Mediterranean climate or a dry-summer version of an oceanic climate. There is very little temperature variation throughout the year, with monthly means ranging from 46.4 °F (8.0 °C) in December to 60.1 °F (15.6 °C) in August, though on the rare occasions continental air masses penetrate they can be much more extreme, with the lowest on record being 13 °F (−11 °C) on December 21, 1990. Conversely, the record high is 100 °F (38 °C), set on June 24, 1925. Cool breezes off the Pacific moderate the city's climate year round. Rain is abundant in winter, due to moist low pressure troughs from the Pacific Ocean. The city's annual rainfall is about 64.7 inches (1,643 mm), but totals are less than an inch in July and August. Fog often blankets the coastal fringe in summer due to the temperature gradient between the cool Pacific Ocean and the warm inland, which serves to keep temperatures markedly cooler than in Eugene or even Seattle. Snow almost never falls in the city, but can be heavy in the adjacent Oregon Coast Range. Nearby Cape Blanco is one of the windiest places on Earth, with gusts of 125 miles per hour (201 km/h) or more achieved during severe winter storms. Annually, the city sees 25 days that fail to reach 50 °F (10 °C) and just 12 days with a temperature of freezing or lower.

There were 4,113 households of which 28.7% had children under the age of 18 living with them, 43.9% were married couples living together, 12.4% had a female householder with no husband present, 4.4% had a male householder with no wife present, and 39.3% were non-families. 30.8% of all households were made up of individuals and 13.6% had someone living alone who was 65 years of age or older. The average household size was 2.33 and the average family size was 2.87. 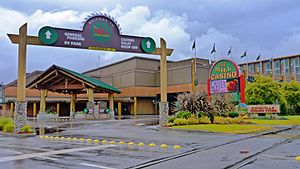 The Mill Casino in North Bend

North Bend is near ocean beaches, including the Oregon Dunes National Recreation Area, which has camping sites, and outdoor recreation opportunities such as all-terrain vehicle driving on the dunes. The Oregon Dunes Recreation Area begins just north of North Bend and attracts approximately 1.5 million visitors each year. North Bend has a public recreational boat ramp that accesses Coos Bay, along with a new concrete pier/boardwalk area that was completed in 2010 per North Bend's regional urban renewal policy. North Bend has a public Olympic-sized indoor pool. The Pony Village Mall in North Bend is a large indoor shopping mall. The Mill Casino is an Indian gaming entertainment center in North Bend with a hotel, gambling, and restaurants. The Bandon Dunes Golf Resort is about 25 miles (40 km) south of North Bend.

Sitting just outside of North Bend is the Coos History Museum, in Coos Bay. This museum was located in North Bend until a new facility was completed in 2014, and the museum and all of its contents were moved to the new location. The Coos History Museum attracts people from around the world as they pass through the area, and it holds precious information about the history of Coos County in Oregon.

The Conde McCullough Memorial Bridge (in North Bend), also known as the "North Bend Bridge", as seen from the east

An aerial view of the Oregon Dunes National Recreation Area, near North Bend

The Southwest Oregon Regional Airport near North Bend and Coos Bay is the only commercial airport on the Oregon Coast.

Porter Stage Lines provides bus service from Coos Bay, Oregon with several stops, including Eugene, which has connections with Amtrak rail services and the Greyhound bus network. Porter Stage Lines ends at Ontario, Oregon in eastern Oregon, and then reverses the trip.

North Bend is home to the Conde McCullough Memorial Bridge and the Haynes Inlet Bridge.

All content from Kiddle encyclopedia articles (including the article images and facts) can be freely used under Attribution-ShareAlike license, unless stated otherwise. Cite this article:
North Bend, Oregon Facts for Kids. Kiddle Encyclopedia.