Coos County ( kooss) is one of the 36 counties in the U.S. state of Oregon. As of the 2020 census, the population was 64,929. The county seat is Coquille. The county was formed from the western parts of Umpqua and Jackson counties. It is named after a tribe of Native Americans who live in the region. Coos County comprises the Coos Bay, OR Micropolitan Statistical Area.

It's unclear where the name Coos originated. Lewis and Clark noted Cook-koo-oose. Early maps and documents spelled it Kowes, Cowes, Coose, Koos, among others.

Although exploration and trapping in the area occurred as early as 1828, the first settlement was established at Empire City in 1853, now part of Coos Bay, Oregon, by members of the Coos Bay Company.

The Territorial Legislature granted permission for the development of wagon roads from Coos Bay to Jacksonville, Oregon, in 1854 and to Roseburg, Oregon, in 1857.

The tallest documented living specimen of a Douglas-fir tree in the world is found 35 miles (56 km) southeast of Coos Bay in the Sitkum area and is slightly more than 100 metres (330 ft) tall. 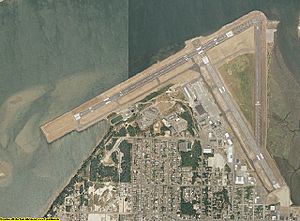 Deposits of gold initially attracted people to the county in the nineteenth century. Between 1890 and 1910, large amounts of coal were mined in the county and shipped to California; production decreased after oil was discovered in that state, and no coal mines in the county have been in production since 1950. These coal fields have been explored for natural gas since 1938, although CDX Gas, a company based in Texas announced in 2003 that they would be drilling two test wells later that year.

A project to build a 60-mile (97 km) natural gas pipeline between the cities of Roseburg and Coos Bay, which would attract new industry to the Coos Bay area, was begun in 1999 when voters approved a local bond measure to raise as much as $27 million, with the state of Oregon providing $24 million. The pipeline construction began in June 2003 and was finished in 2004.

Two projects are under development in Coos County. One is the Jordan Cove Energy Project, which includes the development of a shipping terminal on the north spit of Coos Bay, a half billion dollar terminal facility and a pipeline to deliver liquefied natural gas to southern Oregon and northern California. This endeavor is expected to create up to 175 permanent new jobs, as well as an estimated 930 jobs during its four-year construction phase.

The second project, undertaken by Oregon Resources Corporation (ORC), uses modern strip-mining techniques to extract chromite, zircon, and garnet from local sands. The tailings after processing will be returned and re-contoured to replicate pre-mining conditions, and the affected area will be reforested. Job numbers are not listed on the company website but an annual payroll of $3.5 million is listed in the economic impact portion of the FAQ. The Oregon League of Women Voters cited similar numbers from ORC, wholly owned by Industrial Mineral Corporation of Australia; the operation was projected to create 70 to 80 jobs with a salary of $46,000 per year. Efforts to block the project because of health and environmental concerns did not succeed.

All content from Kiddle encyclopedia articles (including the article images and facts) can be freely used under Attribution-ShareAlike license, unless stated otherwise. Cite this article:
Coos County, Oregon Facts for Kids. Kiddle Encyclopedia.