A cranberry is a fruit. It grows on evergreen dwarf shrubs. Cranberries are in the genus Vaccinium, and its subgenus Oxycoccus. In some classification methods, they are regarded as a genus in their own right.

Cranberry plants grow in acidic bogs in cooler areas of the northern hemisphere. They are low creeping shrubs up to seven feet long, from two to eight inches high. They have slender and wiry stems with small leaves which are evergreen with dark pink flowers. Cranberries are usually eaten during Thanksgiving in the United States. They are also eaten in Europe and some parts of South America

Cranberries are a major commercial crop in certain American states and Canadian provinces. Most cranberries are processed into products such as juice, sauce, jam, and sweetened dried cranberries, with the remainder sold fresh to consumers. Cranberry sauce is a traditional accompaniment to turkey at Christmas dinner in the United Kingdom, and at Christmas and Thanksgiving dinners in the United States and Canada.

The Cranberry Harvest on the Island of Nantucket, Eastman Johnson, 1880

The name cranberry derives from "craneberry", first named by early European settlers in America who felt the expanding flower, stem, calyx, and petals resembled the neck, head, and bill of a crane. Another name used in northeastern Canada is mossberry. In 17th-century New England cranberries were sometimes called "bearberries" as bears were often seen feeding on them. 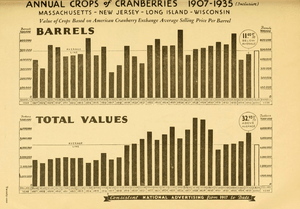 American Revolutionary War veteran Henry Hall is credited as first to farm cranberries in the town of Dennis around 1816. In the 1820s cranberries were shipped to Europe.

Historically, cranberry beds were constructed in wetlands. Today's cranberry beds are constructed in upland areas with a shallow water table. The topsoil is scraped off to form dykes around the bed perimeter. Clean sand is hauled in and spread to a depth of four to eight inches. The surface is laser leveled flat to provide even drainage. Irrigation equipment is installed in the bed to provide irrigation for vine growth and for spring and autumn frost protection.

British Columbia's Fraser River Valley region produces 17 million kg of cranberries annually from 1,150 hectares, about 95% of total Canadian production. In the United States, Wisconsin is the leading producer of cranberries, with over half of U.S. production. Massachusetts is the second largest U.S. producer. Small volume production occurs in southern Argentina, Chile and the Netherlands.

Cranberry juice is usually sweetened or blended with other fruit juices to reduce its natural tartness. Many cocktails, including the Cosmopolitan, are made with cranberry juice. At one teaspoon of sugar per ounce, cranberry juice cocktail is more highly sweetened than even soda drinks that have been linked to obesity.

Usually cranberries as fruit are cooked into a compote or jelly, known as cranberry sauce. Such preparations are traditionally served with roast turkey, as a staple of English Christmas dinners, and Thanksgiving (both in Canada and in the United States). The berry is also used in baking (muffins, scones, cakes and breads). In baking it is often combined with orange or orange zest. Less commonly, cranberries are used to add tartness to savory dishes such as soups and stews.

Fresh cranberries can be frozen at home, and will keep up to nine months; they can be used directly in recipes without thawing.

All content from Kiddle encyclopedia articles (including the article images and facts) can be freely used under Attribution-ShareAlike license, unless stated otherwise. Cite this article:
Cranberry Facts for Kids. Kiddle Encyclopedia.