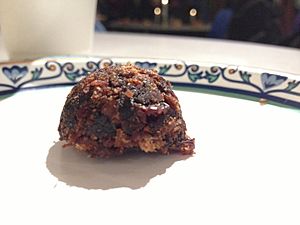 A serving of pemmican 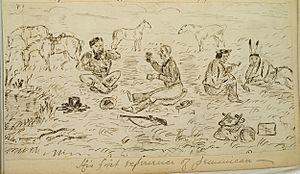 Pemmican is a mixture of tallow, dried meat, and dried berries that is used as a nutritious food. Historically, it was an important part of indigenous cuisine in certain parts of North America and it is still prepared today. The word comes from the Cree word pimîhkân, which is derived from the word pimî, "fat, grease". The Lakota (or Sioux) word is wasná, originally meaning "grease derived from marrow bones", with the wa- creating a noun, and sná referring to small pieces that adhere to something. It was invented by the Indigenous peoples of North America. 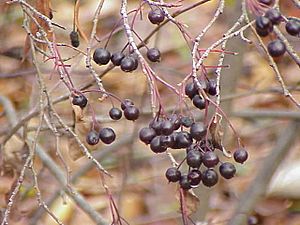 Traditionally, the specific ingredients used for pemmican were usually whatever was available. The dried meat is often in the form of large game meat such as bison, deer, elk, or moose, but the use of fish such as salmon, and smaller game such as duck, is not uncommon. The meats used in contemporary pemmican also include beef. Dried fruit, such as cranberries and Saskatoon berries sometimes are added. Blueberries, cherries, chokeberries, and currants are also used, but in some regions, these fruits are used almost exclusively in ceremonial and wedding pemmican. The additional use of sugar was noted in the journals of European fur traders. These ingredients are mixed together with rendered animal fat (tallow).

Among the Lakota and Dakota nations, there is also a corn wasná (or pemmican) that does not contain dried meat. This is made from toasted cornmeal, animal fat, fruit, and sugar. 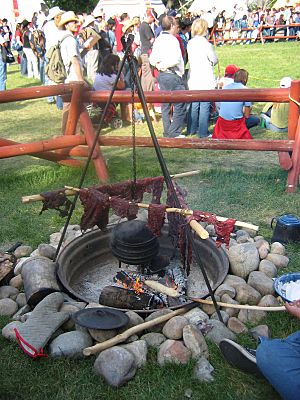 Traditionally, pemmican was prepared from the lean meat of large game such as bison, elk, deer, or moose. The meat was cut in thin slices and dried, either over a slow fire or in the hot sun until it was hard and brittle. Approximately 5 pounds (2,300 g) of meat are required to make 1 pound (450 g) of dried meat suitable for pemmican. This thin brittle meat is known in Cree as pânsâwân and colloquially in North American English, as "dry meat". The pânsâwân was then spread across a tanned animal hide pinned to the ground, where it was beaten with flails or ground between two large stones till it turned into very small pieces, almost powder-like in its consistency. The pounded meat was mixed with melted fat in an approximate 1:1 ratio by volume. Typically, the melted fat would be suet that has been rendered into tallow. In some cases, dried fruits, such as blueberries, chokecherries, cranberries, or Saskatoon berries, were pounded into powder and then added to the meat-fat mixture. The resulting mixture was then packed into rawhide bags for storage where it would cool, and then harden into pemmican.

Today, some people store their pemmican in glass jars or tin boxes. Since there is no "official" recipe for pemmican, the shelf life may vary depending on ingredients and storage conditions. At room temperature, pemmican can generally last from one to five years, but there are anecdotal stories of pemmican stored in cool cellars being safely consumed after a decade or more. If vacuum sealed (e.g., in an MRE), it may remain edible after more than a century.

In his notes of 1874, North-West Mounted Police Sergeant-Major Sam Steele recorded three ways of serving pemmican: raw, boiled in a stew called "rubaboo", or fried, known in the West as a "rechaud":

The pemmican was cooked in two ways in the west; one a stew of pemmican, water, flour and, if they could be secured, wild onions or preserved potatoes. This was called "rubaboo"; the other was called by the plains hunters a "rechaud". It was cooked in a frying pan with onions and potatoes or alone. Some persons ate pemmican raw, but I must say I never had a taste for it that way.

The voyageurs of the Canadian fur trade had no time to live off the land during the short season when the lakes and rivers were free of ice. They had to carry all of their food with them if the distance traveled was too great to be resupplied along the way. A north canoe (canot du nord) with six men and 25 standard 90-pound (41 kg) packs required about four packs of food per 500 miles (800 km). Montreal-based canoemen could be supplied by sea or with locally grown food. Their main food was dried peas or beans, sea biscuit, and salt pork. (Western canoemen called their Montreal-based fellows mangeurs de lard or "pork-eaters".) In the Great Lakes, some maize and wild rice could be obtained locally. By the time trade reached the Winnipeg area, the pemmican trade was developed. 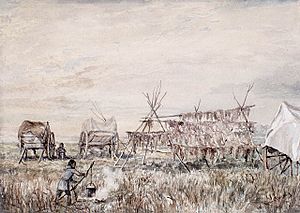 Trading people of mixed heritage and becoming known as the Métis would go southwest onto the prairie in Red River carts, slaughter bison, convert it into pemmican, and carry it north to trade from settlements they would make adjacent to North West Company posts. For these people on the edge of the prairie, the pemmican trade was as important a source of trade goods as was the beaver trade for the Indigenous peoples farther north. This trade was a major factor in the emergence of the new and distinct Métis society. Packs of pemmican would be shipped north and stored at the major fur posts: Fort Alexander, Cumberland House, Île-à-la-Crosse, Fort Garry, Norway House, and Edmonton House.

So important was pemmican that, in 1814, governor Miles Macdonell started the Pemmican War with the Métis when he passed the short-lived Pemmican Proclamation, which forbade the export of pemmican from the Red River Colony.

Alexander Mackenzie relied on pemmican on his 1793 expedition across Canada to the Pacific.

North Pole explorer Robert Peary used pemmican on all three of his expeditions, from 1886 to 1909, for both his men and his dogs. In his 1917 book, Secrets of Polar Travel, he devoted several pages to the food, stating, "Too much cannot be said of the importance of pemmican to a polar expedition. It is an absolute sine qua non. Without it a sledge-party cannot compact its supplies within a limit of weight to make a serious polar journey successful."

British polar expeditions fed a type of pemmican to their dogs as "sledging rations". Called "Bovril pemmican" or simply "dog pemmican", it was a beef product consisting, by volume, of 2⁄3 protein and 1⁄3 fat (i.e., a 2:1 ratio of protein to fat), without carbohydrate. It was later ascertained that although the dogs survived on it, this was not a nutritious and healthy diet for them, being too high in protein. Members of Ernest Shackleton's 1914–1916 expedition to the Antarctic resorted to eating dog pemmican when they were stranded on ice for the winter. 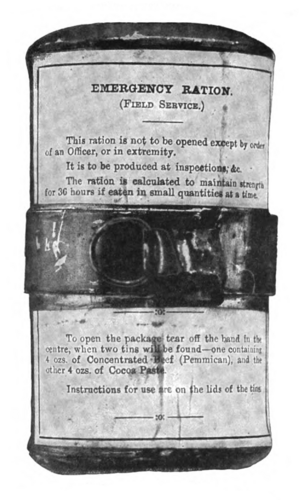 Emergency Ration, c. 1899, as carried by British soldiers in the Second Boer War, consisting of four ounces of pemmican and four ounces of cocoa paste

During the Second Boer War (1899–1902), British troops were given an iron ration made of four ounces of pemmican and four ounces of chocolate and sugar. The pemmican would keep in perfect condition for decades. It was considered much superior to biltong, a form of cured game meats commonly used in Africa. This iron ration was prepared in two small tins (soldered together) that were fastened inside the belts of the soldiers. It was the last ration used and it was used only as a last resort—when ordered by the commanding officer. A man could march on this for 36 hours before he began to drop from hunger.

While serving as chief of scouts for the British Army in South Africa, American adventurer Frederick Russell Burnham required pemmican to be carried by every scout.

Pemmican, likely condensed meat bars, was used a ration for French troops fighting in Morocco in the 1920s.

A 1945 scientific study of pemmican criticized using it exclusively as a survival food because of the low levels of certain vitamins.

A study was later done by the U.S. military in January 1969, entitled Arctic Survival Rations, III. The Evaluation of Pemmican Under Winter Field Conditions. The study found that during a cycle of two starvation periods the subjects could stave off starvation for the first cycle of testing with only 1000 calories worth of pemmican.

In 2019, a successfully preserved pemmican and grain mixture from a 1906 U.S. Army Emergency Ration Pack was eaten by Youtuber Steve Thomas. The filmed footage was then released the following year on 7 March 2020.

Today, people in many indigenous communities across North America continue to make pemmican for personal, community, and ceremonial consumption. Some contemporary pemmican recipes incorporate ingredients that have been introduced to the Americas in the past 500 years, including beef. There are also indigenous-owned companies, such as Tanka Bar, based on Pine Ridge Indian Reservation in South Dakota, that produce pemmican or foods based on traditional pemmican recipes, for commercial distribution.

All content from Kiddle encyclopedia articles (including the article images and facts) can be freely used under Attribution-ShareAlike license, unless stated otherwise. Cite this article:
Pemmican Facts for Kids. Kiddle Encyclopedia.