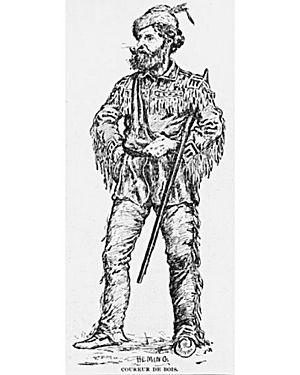 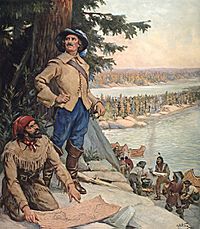 A coureur des bois in the painting La Vérendrye at the Lake of the Woods, circa 1900–1930

A coureur des bois , runner of the woods; was an independent entrepreneurial French-Canadian woodsman who traveled in New France and the interior of North America. They ventured into the woods usually to trade various European items for furs, and along the way they learned the trades and practices of the Native people. These expeditions were fuelled by the beginning of the fur trade in the North American interior. Trade began with coat beaver, but as the market grew coureurs de bois were trapping and trading prime beavers to be felted in Europe.

Evolution of the coureur des bois

While the French had been trading and living among the natives since the earliest days of the colony, coureurs des bois reached their apex during the second half of the 17th century. After 1681, the independent coureur des bois was gradually replaced by the state-sponsored voyageurs, who were the canoe travel workers of licensed fur traders. Coureurs des bois had therefore lost their importance within the fur trade by the early 18th century. However, even while their numbers were dwindling, the coureur des bois developed as a symbol of the colony, creating a lasting myth that would continue to define New France for centuries.

All content from Kiddle encyclopedia articles (including the article images and facts) can be freely used under Attribution-ShareAlike license, unless stated otherwise. Cite this article:
Coureur de bois Facts for Kids. Kiddle Encyclopedia.