James A. Michener facts for kids

James Albert Michener February 3, 1907 – October 16, 1997 was an American author of more than 40 books, most of which were fictional, lengthy family sagas covering the lives of many generations in particular geographic locations and incorporating solid history. Michener had numerous bestsellers and works selected for Book of the Month Club, and was known for his meticulous research behind the books.

Michener wrote that he did not know who his parents were or exactly when and where he was born. He was raised by an adoptive mother, Mabel Michener, in Doylestown, Pennsylvania. Some have argued that Mabel was his birth mother. He graduated from Swarthmore College, where he played basketball, in 1929. He later studied at the Colorado State Teachers College. He taught there for several years. He also taught at Harvard University. 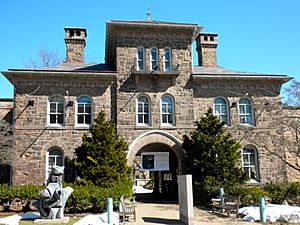 Opened in 1988, in Michener's hometown of Doylestown, Pennsylvania, the James A. Michener Art Museum houses collections of local and well-known artists. Michener pledged $5.5 million to the museum in 1996. Constructed from the remains of an old state prison, the museum is a non-profit organization with both permanent and rotating collections. Two prominent permanent fixtures are the James A. Michener display room and the Nakashima Reading Room, constructed in honor of his third wife's Japanese heritage. The museum is known for its permanent collection of Pennsylvania Impressionist paintings.

Michener became a major philanthropist, donating more than $100 million to educational, cultural, and writing institutions. By 1992, his gifts made him Austin's largest single donor to that time. In 1989, Michener donated the royalty earnings from the Canadian edition of his novel Journey (1989), published in Canada by McClelland & Stewart, to create the Journey Prize, an annual Canadian literary prize worth $10,000 (CDN) that is awarded for the year's best short story published by an emerging Canadian writer. 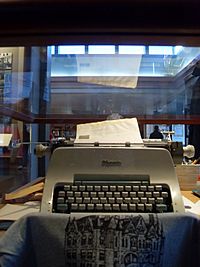 Michener's typewriter at the James A. Michener Art Museum in Doylestown, Pennsylvania

In Micheners' final years, he and his wife lived in Austin, Texas, and they endowed the Michener Center for Writers at the University of Texas at Austin. The Center provides three-year Michener Fellowships in fiction, poetry, playwriting and screenwriting to a small number of students.

Suffering from terminal kidney disease, in October 1997, Michener ended the daily dialysis treatment that had kept him alive for four years. He said he had accomplished what he wanted and did not want further physical complications. On October 16, 1997, he died of kidney failure, at age 90. Michener was cremated, and his ashes were placed next to those of his wife at Austin Memorial Park Cemetery in Austin, Texas.

Books by James A. Michener

All content from Kiddle encyclopedia articles (including the article images and facts) can be freely used under Attribution-ShareAlike license, unless stated otherwise. Cite this article:
James A. Michener Facts for Kids. Kiddle Encyclopedia.