The City of Greeley is the Home Rule Municipality that is the county seat and the most populous municipality of Weld County, Colorado, United States. Greeley is in northern Colorado and is situated 49 miles (79 km) north-northeast of the Colorado State Capitol in Denver. According to a July 2015 estimate by the U.S. Census Bureau, the population of the city is 100,883, and a 2014 population estimate made Greeley the 12th most populous city in the state of Colorado. Greeley is a major city of the Front Range Urban Corridor. 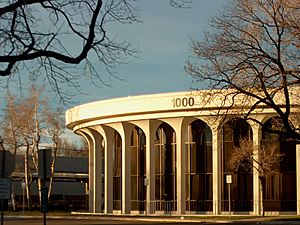 The town was named after Horace Greeley, editor of the New-York Tribune, who came to Colorado in the 1859 Pike's Peak Gold Rush. It was founded as the Union Colony in 1869, an experimental utopian society, but the name was later changed in honor of Horace Greeley. Governor Benjamin Harrison Eaton declared Greeley an official city on April 6, 1886.

Greeley was built on farming and agriculture but kept up with most modern technologies as they grew. Telephones were in town by 1883 with electric lights downtown by 1886. Automobiles were on the roads alongside horse drawn buggies by 1910. KFKA became one of the first radio stations to broadcast in the USA in 1922 and the Greeley Municipal Airport was built in 1928. Greeley housed two POW camps in 1943, during World War II. One was for German POWs and the other was for Italian POWs. A vote to allow the sale of alcohol passed by a mere 477 votes in 1969, thus ending Temperance in the city.

The Greeley Philharmonic Orchestra was started in 1911. In 1958, Greeley became the first city to have a Department of Culture. Greeley is still growing and changing today, its population has more than doubled since 1970.

Greeley is located in (or just west of) the area previously occupied by the Overland Trail station of Latham (originally called the Cherokee City Station). The Latham station (also known as Fort Latham) was built in 1862 and named in honor of Milton S. Latham, one of California's early senators. The stagecoach station was at the confluence of the South Platte River and the Cache la Poudre River. It is believed that here occurred the birth of the first white child born in Colorado, a girl. Fort Latham was the headquarters of the government troops during the Indian conflicts of 1860-64 and the county seat (the post office being called Latham). 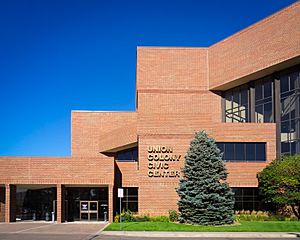 Greeley began as the Union Colony, which was founded in 1869 as an experimental utopian community "based on temperance, religion, agriculture, education and family values." by Nathan C. Meeker, a newspaper reporter from New York City. Meeker purchased a site at the confluence of the Cache la Poudre and South Platte Rivers (that included the area of Latham, an Overland Trail station), halfway between Cheyenne and Denver along the tracks of the Denver Pacific Railroad formerly known as the "Island Grove Ranch". The name Union Colony was later changed to Greeley in honor of Horace Greeley, who was Meeker's editor at the New York Tribune, and popularized the phrase "Go West, young man".

Greeley is bordered on the south by the towns of Evans and Garden City, and the three together are often collectively (although incorrectly) referred to as "Greeley". The Greeley/Evans area is bounded on the south by the South Platte River, and the Cache la Poudre River flows through north Greeley. The intersection of U.S. Highways 85 and 34 is often cited as the location of Greeley, although the actual point of intersection lies within the city limits of Evans. Greeley contains the western terminus of State Highway 257 and borders State Highway 392 on the north.

Greeley experiences a semi-arid climate (Köppen BSk). High temperatures are generally around 90 °F-95 °F (32 °C) in the summer and 40 °F-45 °F (4 °C) in the winter, although there is significant variation. The hottest days generally occur around the third week of July and the coldest in January. Nighttime lows are near 60 °F (16 °C) in the summer and around 15 °F-20 °F (-9 °C) in the winter. Record high temperatures of 112 °F (44.4 °C) have been recorded, as have record low temperatures of -25 °F (-32 °C). The first freeze typically occurs around October 10 and the last can be as late as May 4. Extratropical cyclones which disrupt the weather for the eastern two-thirds of the US often originate in or near Colorado, which means Greeley does not experience many fully developed storm systems. Warm fronts, sleet, and freezing rain are practically non-existent here. In addition, the city's proximity to the Rocky Mountains and lower elevation, compared to the mountains west of the city, result in less precipitation and fewer thunderstorms. This is paradoxical, because adjacent areas (mostly farmland) experience between 7 and 9 hail days per year.

The climate in Greeley, as well as all of Colorado, is extremely dry. The Chinook winds coming off the mountains often raise temperatures to near 70 °F (21 °C) in January and February, and sometimes to near 90 °F (32 °C) in April. Greeley's elevation and low year-round humidity means that nighttime low temperatures are practically never above 68 °F (20 °C), even in the very hottest part of the summer. The diurnal temperature range is usually rather wide, with a 50-degree (Fahrenheit) difference between daytime high and nighttime low not uncommon, especially in the spring and fall months. Rapid day-to-day and diurnal fluctuation in temperature is also common.

Greeley is home to the Union Colony Civic Center, one of the largest performing arts venues in Colorado. The 1686 seat Monfort Concert Hall hosts touring Broadway musicals, concerts, comedians, along with regional and local performing arts groups. The 214 seat Hensel Phelps Theatre hosts The Stampede Troupe in addition to lectures, meetings, and smaller performances. In addition, the Tointon Gallery presents a dozen exhibits annually by local, regional, and national artists, and is free to the public.

Owned and operated by the City of Greeley, the Union Colony Civic Center sponsors many events held by the University of Northern Colorado, Greeley Philharmonic Orchestra, and the Greeley Chorale.

Greeley is a sister city to Moriya, a city located in Japan's Ibaraki Prefecture. Every other summer 18 students from Moriya come to Greeley for a week-long stay.

On December 12, 2006, the Immigration and Customs Enforcement (I.C.E) staged a coordinated predawn raid at the Swift & Co. meat packing plant in Greeley and at five other Swift plants in western states, interviewing illegal workers and hauling hundreds off in buses.

Greeley was featured in the books Fast Food Nation and Chew on This by Eric Schlosser.

In August 2010, Leprino Foods announced plans for a new $270 million factory in Greeley which could employ up to 500 people. Construction began in July 2010.

Greeley was also mentioned multiple times in the animated comedy show, South Park, as it is close to South Park, Colorado, which is a fictional town based on Fairplay.

All content from Kiddle encyclopedia articles (including the article images and facts) can be freely used under Attribution-ShareAlike license, unless stated otherwise. Cite this article:
Greeley, Colorado Facts for Kids. Kiddle Encyclopedia.