Fort Collins was founded as a military outpost of the United States Army in 1864. It succeeded a previous encampment, known as Camp Collins, on the Cache La Poudre River, near what is known today as Laporte. Camp Collins was erected during the Indian wars of the mid-1860s to protect the Overland mail route that had been recently relocated through the region. Travelers crossing the county on the Overland Trail would camp there, but a flood destroyed the camp in June 1864. Afterward, the commander of the fort wrote to the commandant of Fort Laramie in southeast Wyoming, Colonel William O. Collins, suggesting that a site several miles farther down the river would make a good location for the fort. The post was manned originally by two companies of the 11th Ohio Volunteer Cavalry and never had walls. 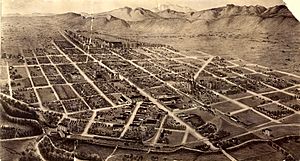 Settlers began arriving in the vicinity of the fort nearly immediately. The fort was decommissioned in 1867. The original fort site is now adjacent to the present historic "Old Town" portion of the city. The first school and church opened in 1866, and the town was platted in 1867. The civilian population of Fort Collins, led by local businessman Joseph Mason, led an effort to relocate the county seat to Fort Collins from LaPorte, and they were successful in 1868.

The city's first population boom came in 1872, with the establishment of an agricultural colony. Hundreds of settlers arrived, developing lots just south of the original Old Town. Tension between new settlers and earlier inhabitants led to political divisions in the new town, which was incorporated in 1873. Although the Colorado Agricultural College was founded in 1870, the first classes were held in 1879.

The 1880s saw the construction of a number of elegant homes and commercial buildings and the growth of a distinctive identity for Fort Collins. Stone quarrying, sugar-beet farming, and the slaughter of sheep were among the area's earliest industries. Beet tops, an industry supported by the college and its associated agricultural experiment station, proved to be an excellent and abundant food for local sheep, and by the early 1900s the area was being referred to as the "Lamb feeding capital of the world." In 1901 the Great Western sugar processing plant was built in the neighboring city of Loveland. 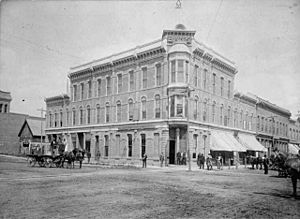 Although the city was affected by the Great Depression and simultaneous drought, it nevertheless experienced slow and steady growth throughout the early part of the twentieth century. During the decade following World War II, the population doubled and an era of economic prosperity occurred. Old buildings were razed to make way for new, modern structures. Along with revitalization came many changes, including the closing of the Great Western sugar factory in 1955, and a new city charter, adopting a council-manager form of government in 1954. Similarly, Colorado State University's enrollment doubled during the 1960s, making it the city's primary economic force by the end of the century.

Fort Collins gained a reputation as a very conservative city in the twentieth century, with a prohibition of alcoholic beverages, a contentious political issue in the town's early decades, being retained from the late 1890s until student activism helped bring it to an end in 1969. During that same period, civil rights activism and anti-war disturbances heightened tensions in the city, including the burning of several buildings on the CSU campus.

During the late 20th century, Fort Collins expanded rapidly to the south, adding new development, including several regional malls. Management of city growth patterns became a political priority during the 1980s, as well as the revitalization of Fort Collins' Old Town with the creation of a Downtown Development Authority. In late July 1997, the city experienced a flash flood after and during a 31-hour period when 10–14 in (250–360 mm) of rain fell. The rainfall was the heaviest on record for an urban area of Colorado. Five people were killed and $5 million in damages were dealt to the city. The waters flooded Colorado State University's library and brought about $140 million in damages to the institution. 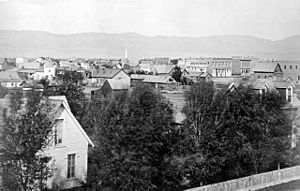 Panorama of Poudre Valley from I-25, facing west

Fort Collins is situated at the base of the Rocky Mountain foothills of the northern Front Range approximately 60 miles (97 km) north of Denver, Colorado and 45 miles (72 km) south of Cheyenne, Wyoming. Elevation is 4,982 ft (1,519 m) above sea level. Geographic landmarks include Horsetooth Reservoir and Horsetooth Mountain—so named because of a tooth-shaped granite rock that dominates the city's western skyline. Longs Peak can also clearly be seen on a clear day to the southwest of the city.

Located along the Front Range of the Rocky Mountains, Fort Collins experiences a semi-arid climate (Köppen BSk), with four distinct seasons and low annual precipitation. Summers range from mild to hot, with low humidity and occasional afternoon thunderstorms. Winters range from mild to moderately cold. The city experiences lots of sunshine, with 300 days of sunshine per year and 19 days with 90° + weather. The average temperature in July, the warmest month, is 71 °F (22 °C). The average temperature in January, the coldest month, is 29 °F (−2 °C). Annual snowfall averages 59 inches (1.5 m), and can occur from early September through the end of May. Average precipitation overall is 15.9 inches (400 mm).

There were 45,882 households out of which 29.0% had children under the age of 18 living with them, 44.9% were married couples living together, 7.9% had a female householder with no husband present, and 43.8% were non-families. 26.0% of all households were made up of individuals and 5.9% had someone living alone who was 65 years of age or older. The average household size was 2.45 and the average family size was 3.01. 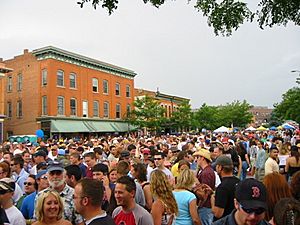 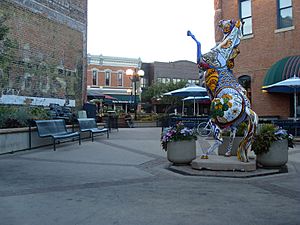 Much of Fort Collins's culture is centered on the students of Colorado State University. The city provides school year residences for its large college-age population; there is a local music circuit which is influenced by its college town atmosphere and is home to a number of well known microbreweries. The Downtown Business Association hosts a number of small and large festivals each year in the historic Downtown district, including Bohemian Nights at NewWestFest in late summer, which features local cuisine, music, and businesses. The Fort Collins Lincoln Center is home to the Fort Collins Symphony Orchestra and regularly attracts national touring companies of Broadway plays.

The Colorado Brewer's Festival is held in late June annually in Fort Collins. The festival features beers from as many as 45 brewers from the state of Colorado and averages around 30,000 attendees. New Belgium Brewery also hosts the Tour de Fat which draws over 20,000 people riding bikes and dressing in costume. As well as a series of Bike in movies starting late September.

The Colorado Marathon is a yearly event running down the Poudre Canyon and finishing in downtown Fort Collins.

The principal venue for the performing arts in Fort Collins is the Lincoln Center, 417 W. Magnolia St., at Meldrum Street. Built in 1978, the center includes the 1,180-seat Performance Hall and the 220-seat Magnolia Theatre, as well as four exhibit galleries and an outdoor sculpture and performance garden. It is home to many local arts groups, including the Fort Collins Symphony, Opera Fort Collins, Canyon Concert Ballet, Larimer Chorale, Youth Orchestra of the Rockies, OpenStage Theatre and Company, Foothills Pops Band and the Fort Collins Children's Theatre. Concert, dance, children's, and travel film series are presented annually. The center is wheelchair-accessible and has an infrared sound system for the hearing-impaired. Ticket prices vary considerably, but children's programs are often free or less than $10, and big name acts and Broadway shows are $18 to $36. The center hosts nearly 1,750 events each year.

The Fort Collins Museum, established in 1941, is a regional center focusing on the culture and history of Fort Collins and the surrounding area. The Fort Collins Museum houses over 30,000 artifacts and features temporary and permanent exhibits, on-going educational programs and events, and is home to four historic structures located in the outdoor Heritage Courtyard.

The arts are represented by The Center for Fine Art Photography, University Center for the Arts, Fort Collins Museum of Art (FCMOA), the Arts Incubator of the Rockies (AIR), and the Bas Bleu Theatre Company.

The Gardens on Spring Creek is an 18-acre (7.3 ha) botanical garden. The site includes several themed gardens ranging from a children's garden to a rock garden, to several themed demonstration gardens.

Fort Collins has gathered many top rankings in recent years for health, well-being, and quality of life. 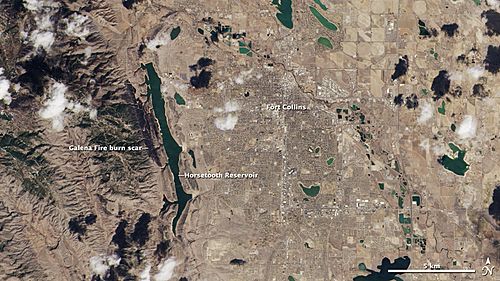 Fort Collins's downtown streets form a grid with Interstate 25 running north and south on the east side of the city. Many of the streets are named after the town's founders. U.S. Highway 287 becomes College Avenue inside the city and is the busiest street; It runs north and south, effectively bisecting the city, and serving as the east–west meridian, while Mountain Avenue is the north-south. SH 14 runs concurrent with US 287 at the northern city limit to Jefferson Street, running southeast along Jefferson (later turning into Riverside Avenue), then turning east onto Mulberry Street where it goes east out of the city after an interchange with Interstate 25.

The city bus system, known as Transfort, operates more than a dozen routes throughout Fort Collins Monday through Saturday, except major holidays.

The MAX Bus Rapid Transit is a bus rapid transit that provides service on the Mason Corridor Transitway parallel to College Avenue from Downtown Fort Collins to a transit center just south of Harmony Road. The trip takes approximately 15 minutes from end to end with various stops between. The service began in May 2014. The Mason Corridor and the Mason Express are intended to be the center of future transit-oriented development.

Fort Collins is connected to Loveland, Berthoud, and Longmont via the FLEX regional bus route.

Bicycling is a popular and viable means of transportation in Fort Collins. There are more than 280 miles (450 km) of designated bikeways in Fort Collins, including on street designated bike lanes, and the Spring Creek and Poudre River Trails, both paved. There is also a dirt trail, the 5.8-mile (9.3 km) Foothills Trail, parallel to Horsetooth Reservoir from Dixon Reservoir north to Campeau Open Space and Michaud Lane.

The Fort Collins Bicycle Library lends bicycles to visitors, students, and residents looking to explore the city of Fort Collins. There are self-guided tours from the "Bike the Sites" collection, including a Brewery Tour, Environmental Learning Tour, and the Historic Tour. The Bike Library is centrally located in the heart of downtown Fort Collins in Old Town Square.

In 2013 the League of American Bicyclists designated Fort Collins as a Platinum-level Bicycle Friendly Community – one of four in the United States.

Fort Collins also once had a municipally owned trolley service with three branches from the intersection of Mountain and College avenues. It was closed in 1951 after ceasing to be profitable. In 1983–84, a portion of the Mountain Avenue line and one of the original trolley cars, Car 21, were restored as a heritage trolley service, under the same name used by the original system, the Fort Collins Municipal Railway. This has been in operation since the end of 1984 on weekends and holidays in the spring and summer, as a tourist- and cultural/educational attraction small fee applies to ride.

Fort Collins was the setting of the infamous Balloon boy hoax of October 15, 2009.

All content from Kiddle encyclopedia articles (including the article images and facts) can be freely used under Attribution-ShareAlike license, unless stated otherwise. Cite this article:
Fort Collins, Colorado Facts for Kids. Kiddle Encyclopedia.