Cheyenne ( shy-AN or) is the capital and most populous city of the US state of Wyoming and the county seat of Laramie County. It is the principal city of the Cheyenne, Wyoming, Metropolitan Statistical Area which encompasses all of Laramie County. The population was 59,466 at the 2010 census. Cheyenne is the northern terminus of the extensive and fast-growing Front Range Urban Corridor that stretches from Cheyenne to Pueblo, Colorado, and has a population of 4,333,742 according to the 2010 United States Census. Cheyenne is situated on Crow Creek and Dry Creek. The Cheyenne, Wyoming Metropolitan Area had a 2010 population of 91,738, making it the 354th most populous metropolitan area in the United States. 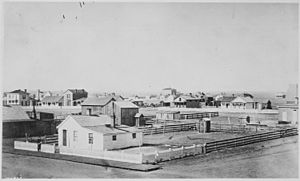 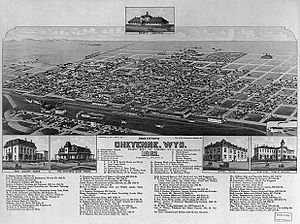 On July 5, 1867, General Grenville M. Dodge and his survey crew plotted the site now known as Cheyenne in Dakota Territory (later Wyoming Territory). This site was chosen as the point at which the Union Pacific Railroad crossed Crow Creek, a tributary of the South Platte River. The city was not named by Dodge, as his memoirs state, but rather by friends who accompanied him to the area Dodge called "Crow Creek Crossing". It was named for the American Indian Cheyenne nation, one of the most famous and prominent Great Plains tribes closely allied with the Arapaho.

The construction of the Union Pacific Railroad brought hopes of prosperity to the region when it reached Cheyenne on November 13, 1867. The population at the time numbered over 4,000, and grew rapidly. This rapid growth earned the city the nickname "Magic City of the Plains".

In 1867, Fort D. A. Russell was established, three miles west of the city. The fort was later renamed Francis E. Warren Air Force Base.

The Wyoming State Capitol was constructed between 1886 and 1890, with further improvements being completed in 1917.

The Wyoming Stock Growers Association met at The Cheyenne Club, which allegedly acted as an interim government for the territory. Many of the WSGA's rules and regulations became state laws.

The Cheyenne Regional Airport was opened in 1920, initially serving as a stop for airmail. It soon developed into a civil-military airport, serving DC-3s and various military craft. During World War II, hundreds of B-17s, B-24s, and PBYs were outfitted and upgraded at the airfield. Today, it serves a number of military functions, as well as a high-altitude testbed for civilian craft. 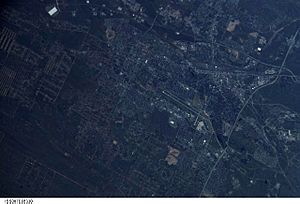 Lying near the southeast corner of the state, Cheyenne is one of the least centrally located state capitals in the nation (together with cities such as Carson City, Nevada; Juneau, Alaska; and Topeka, Kansas).

Cheyenne, like most of the rest of Wyoming, has a cool semi-arid climate (Köppen BSk), and is part of USDA Hardiness zone 5b, with the suburbs falling in zone 5a. Winters are cold and moderately long, but relatively dry, with a December average of 28.8 °F (−1.8 °C), highs that fail to breach freezing occur 35 days per year, and lows dip to the 0 °F or −17.8 °C mark on 9.2 mornings. However, the cold is often interrupted, with chinook winds blowing downslope from the Rockies that can bring warm conditions, bringing the high above 50 °F or 10 °C on twenty days from December to February.

The city averages below 60% daily relative humidity in each month and receives an average 2,980 hours (~67% of the possible total) of sunshine annually. On July 16, 1979 an F3 tornado struck Cheyenne causing one death and 40 injuries. It was the most destructive tornado in Wyoming history.

There were 25,558 households of which 30.2% had children under the age of 18 living with them, 43.1% were married couples living together, 12.0% had a female householder with no husband present, 4.7% had a male householder with no wife present, and 40.3% were non-families. 33.5% of all households were made up of individuals and 10.6% had someone living alone who was 65 years of age or older. The average household size was 2.29 and the average family size was 2.92. 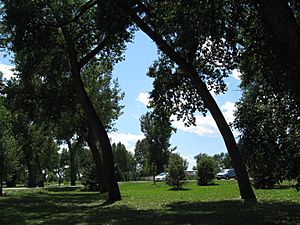 The Cheyenne Parks and Recreation Department operates an Ice and Events center, swimming pool, spray park, skateboard park, two golf courses, Cheyenne Botanic Gardens (including the Paul Smith Children's Village at the Gardens), paddle boat rentals in Lions Park (summers only), cemeteries, forestry operations, community house, Youth Activity Center and a miniature golf park. The Cheyenne Parks and Recreation Department also operates a 37-mile Greater Cheyenne Greenway system. The greenway connects parks and neighborhoods of greater Cheyenne. It includes many bridges and underpasses where travelers can avoid high traffic roads and travel above waterways and drainages. In 1996, as a result of the greenway, Cheyenne was named a "Trail Town USA" by the National Park service and the American Hiking Society.

Over fifty different locations in Cheyenne are listed on the National Register of Historical Places, including: 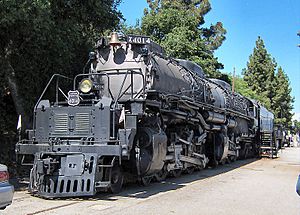 Several districts in the city are also listed, including: 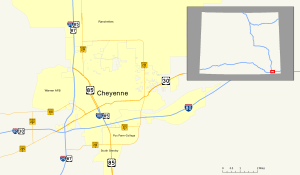 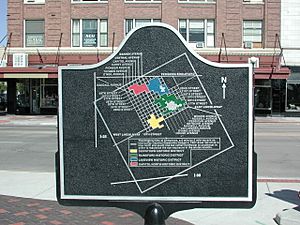 Cheyenne provides local hourly bus service from 6 a.m.-7 p.m. Monday-Friday and 10 a.m.-5 p.m. on Saturday. There is no Sunday service.

The Union Pacific and BNSF railroads intersect in Cheyenne. The city is home to a BNSF railyard, as well as the Union Pacific's steam program. UP's 844, 3985 and 4014 reside in the steam shop. 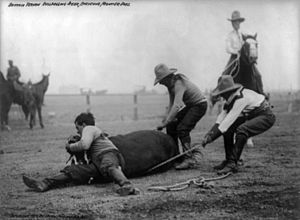 All content from Kiddle encyclopedia articles (including the article images and facts) can be freely used under Attribution-ShareAlike license, unless stated otherwise. Cite this article:
Cheyenne, Wyoming Facts for Kids. Kiddle Encyclopedia.