Bismarck is the capital of the U.S. state of North Dakota and the county seat of Burleigh County. It is the second-most populous city in North Dakota after Fargo. The city's population was 61,272 at the 2010 census, while its metropolitan population was 129,517. In 2015, Forbes magazine ranked Bismarck as the seventh fastest-growing small city in the United States.

Bismarck was founded by European Americans in 1872 on the east bank of the Missouri River. It has been North Dakota's capital city since 1889, when the state was created from the Dakota Territory and admitted to the Union.

Bismarck is located across the river from Mandan, named after a historic Native American tribe of the area. The two cities make up the core of the Bismarck-Mandan Metropolitan Statistical Area.

The North Dakota State Capitol, the tallest building in the state, is in central Bismarck. The state government employs more than 4,000 in the city. As a hub of retail and health care, Bismarck is the economic center of south-central North Dakota and north-central South Dakota.

For thousands of years, present-day central North Dakota was inhabited by indigenous peoples, who created successive cultures. The historic Mandan Native American tribe occupied the area long before Europeans arrived. They spoke the Hidatsa language. The Hidatsa name of Bismarck is mirahacii arumaaguash ("Place of the tall willows"); the Arikara name is ituhtaáwe [itUhtaáwe].

In 1872 European Americans founded a settlement at what was then called Missouri Crossing, so named because the Lewis and Clark Expedition crossed the river there on their exploration of the Louisiana Purchase in 1804-1806. It had been an area of Mandan settlement. Later the new town was called Edwinton, after Edwin Ferry Johnson (1803–1872), engineer-in-chief for the Northern Pacific Railway. Its construction of railroads in the territory attracted workers and settlers.

In 1873, the Northern Pacific Railway renamed the city as Bismarck, in honor of German chancellor Otto von Bismarck. Railroad officials hoped to attract German immigrant settlers to the area and German investment in the railroad. The discovery of gold in the nearby Black Hills of South Dakota the following year was a greater impetus for growth. Thousands of miners came to the area, encroaching on what the Lakota considered sacred territory and leading to heightened tensions with the Native Americans. Bismarck became a freight-shipping center on the "Custer Route" from the Black Hills. In 1883 Bismarck was designated as the capital of the Dakota Territory, and in 1889 as the state capital of the new state of North Dakota. 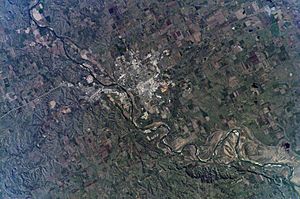 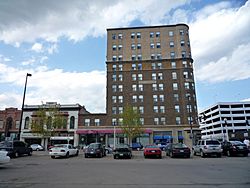 Downtown Bismarck: Patterson Place (built in 1911 as the McKenzie Hotel) was the tallest building in the state until construction of the capitol building. Originally operated as a noted luxury hotel, it has been adapted for senior housing and a retail restaurant.

The city has developed around downtown Bismarck, the center of historic development. It is distinctive because the city's major shopping center, Kirkwood Mall, is located in the center city rather than in the suburbs. Several other major retail stores are in the vicinity of Kirkwood Mall, which was developed near the Bismarck Civic Center. The two Bismarck hospitals, St. Alexius Medical Center and Sanford Health (previously Medcenter One Health Systems) are both downtown. The streets are lined with small stores and restaurants, providing numerous amenities.

Much recent commercial and residential growth has taken place in the northern section of the city, largely because of expanding retail centers. Among the shopping centers in northern Bismarck are Gateway Fashion Mall, Northbrook Mall, Arrowhead Plaza, and the Pinehurst Square "power center" mall.

The Cathedral District is an historic neighborhood near downtown Bismarck. The neighborhood was named after the art deco Cathedral of the Holy Spirit. Some homes in this neighborhood date to the 1880s, although many were built in the first decades of the 20th century. At times, the city has proposed widening the streets in the neighborhood to improve traffic flow. Many residents object because such a project would require the removal of many of the towering American elms which line the streets. These have escaped the elm disease that destroyed street canopies of trees in Eastern cities.

After the completion of Garrison Dam in 1953 by the Army Corps of Engineers, which improved flood control, the floodplain of the Missouri River became a more practical place for development. Significant residential and commercial building has taken place in this area on the south side of the city. The Upper Missouri River is still subject to seasonal flooding.

Situated in the middle of the Great Plains, between the geographic centers of the United States and Canada, Bismarck displays a highly variable four-season humid continental climate (Köppen Dfb) with strong semi-arid influences. Bismarck's climate is characterized by long, cold, somewhat snowy and windy winters, and hot summers that are at times humid. Thunderstorms occur in spring and summer, but much of the rest of the year is dry.

The warmest month in Bismarck is July, with a daily mean of 21.3 °C (70.3 °F), with typically wide variations between day and night. The coldest month is January, with a 24-hour average of −12.1 °C (10.2 °F). Precipitation peaks from May to September and is rather sparse in the winter months. Winter snowfall is typically light to moderate, occurring with the passage of frontal systems; major storms are rare.

There were 27,263 households of which 27% had children under the age of 18 living with them (the lowest percentage in North Dakota), 44.1% were married couples living together, 9.6% had a female householder with no husband present, 3.6% had a male householder with no wife present, and 42.7% were non-families. 34.8% of all households were made up of individuals and 11.7% had someone living alone who was 65 years of age or older. The average household size was 2.18 and the average family size was 2.82.

The Belle Mehus Auditorium, a 1914 historic building in downtown Bismarck, is a center for the arts in the area. Performances of Northern Plains Dance and the Bismarck-Mandan Symphony Orchestra are held there.

Bismarck has a large park system and an extensive network of exercise trails. The Bismarck Parks and Recreation District, established in 1927, operates many parks, swimming pools, and several golf courses within the city. The Parks and Recreation District operates roughly 2,300 acres (930 ha) of public parkland. Sertoma Park stretches more than 3 miles (4.8 km) along the banks of the Missouri River. Within the park are several miles of biking trails and the Dakota Zoo. 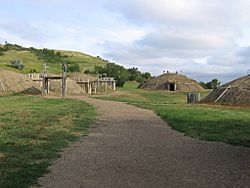 One of the main tourism attractions of the Bismarck area is Fort Abraham Lincoln State Park, located 7 miles (11 km) south of neighboring Mandan, North Dakota. It contains the partial reconstruction of Fort Abraham Lincoln, the headquarters of the 7th Cavalry and last command of General George Armstrong Custer before the Battle of the Little Bighorn (also known as the Battle of the Greasy Grass). The park includes On-a-Slant Village, a partially rebuilt earth lodge village that was once occupied by people of the historic Mandan tribe. Guided tours of both sites are offered in the summertime. There are also a museum on park history, nature trails, and a campground.

Hunting and fishing are popular in the area, with hunting seasons for deer, pheasant, and waterfowl. Fishing is a year-round sport on the Missouri River bordering Bismarck, and there are public docks on the river. From north to south, there is a dock at the Port of Bismarck, from which the Lewis and Clark passenger riverboat plies the Missouri; Fox Island Landing, about a half mile southwest of Riverwood Golf Course; and the Bismarck Dock at General Sibley Park, which has a boat ramp and picnic facilities.

Near Bismarck are several dammed lakes, including McDowell Dam Lake, 6 miles (9.7 km) east of the city; Harmon Lake, 8 miles (13 km) north of neighboring Mandan on the west side of the river; and two lakes several miles west of the city.

In February 2007, Bismarck broke the record for the most snow angels made in one place. A total of 8,962 participants came to the capitol grounds for the event. 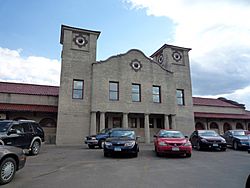 The historic Northern Pacific Railway Depot, built in 1901 using the Mission Revival style. The building has been adapted for use as a Mexican restaurant.

The Capital Area Transit System (CAT) began operations in May 2004. This public bus system is operated by the Bis-Man Transit Board and has eleven routes throughout Bismarck and Mandan. Bis-Man Transit also operates a para-transit service for senior citizens and people with disabilities.

Bismarck Municipal Airport is south of the city. It has the largest passenger volume in western North Dakota and the second highest within the state. The airport is served by United Express, Allegiant Air, Delta Air Lines, American Airlines, and Frontier Airlines. A new $15 million terminal opened in May 2005. The previous terminal was built in the mid-1960s and expanded in the mid-1970s. After a windstorm collapsed part of the roof connecting the expanded terminal to the original building, officials decided to demolish the entire complex and build the new terminal.

The BNSF Railway runs east–west through the city. The railway was originally integral to the growth of Bismarck and Mandan. Today it is used for freight. Due to restructuring in the railroad industry, there has not been Amtrak passenger service in Bismarck since the North Coast Hiawatha service ended in 1979. The closest Amtrak station is in Minot, north of Bismarck, where the Empire Builder line runs.

All content from Kiddle encyclopedia articles (including the article images and facts) can be freely used under Attribution-ShareAlike license, unless stated otherwise. Cite this article:
Bismarck, North Dakota Facts for Kids. Kiddle Encyclopedia.