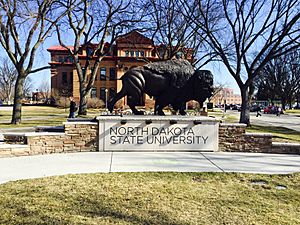 Fargo is the most populous city in the state of North Dakota, accounting for over 15% of the state population. Fargo is also the county seat of Cass County. According to the 2015 United States Census estimates, its population was 118,523. Fargo, along with its twin city of Moorhead, Minnesota, as well as the adjacent cities of West Fargo, North Dakota and Dilworth, Minnesota, form the core of the Fargo-Moorhead, ND-MN Metropolitan Statistical Area, which in 2015 contained a population of 233,836. In 2014, Forbes magazine ranked Fargo as the fourth fastest-growing small city in the United States.

Founded in 1871 and located on the Red River of the North floodplain, Fargo is a cultural, retail, health care, educational, and industrial center for eastern North Dakota and northwestern Minnesota. In addition, Fargo is home to North Dakota State University.

Historically part of Sioux (Dakota) territory, the area that is present-day Fargo was an early stopping point for steamboats traversing the Red River during the 1870s and 1880s. The city was originally named "Centralia," but was later renamed "Fargo" after Northern Pacific Railway director and Wells Fargo Express Company founder William Fargo (1818−1881). The area started to flourish after the arrival of the Northern Pacific Railroad and the city became known as the "Gateway to the West."

During the 1880s, Fargo became the "divorce capital" of the Midwest because of lenient divorce laws.

A major fire struck the city on June 7, 1893, destroying 31 blocks of downtown Fargo. But the city was immediately rebuilt with new buildings made of brick, new streets, and a water system. More than 246 new buildings were built within 1 year. There were several rumors concerning the cause of the fire. 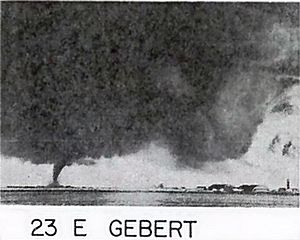 Early in the century, the automobile industry flourished, and in 1905, Fargo was home to the Pence Automobile Company.

Fargo-Moorhead boomed after World War II and the city grew rapidly despite being hit by a violent tornado in 1957. The tornado destroyed a large portion of the north end of the city. Ted Fujita, famous for his Fujita tornado scale, analyzed pictures of the Fargo tornado, which helped him develop his ideas for "wall cloud" and "tail cloud." These were the first major scientific descriptive terms associated with tornadoes. The coming of two interstates (I-29 and I-94) revolutionized travel in the region and pushed growth of Fargo to the south and west of the city limits. In 1972, the West Acres Shopping Center, currently the largest shopping mall in North Dakota, was constructed near the intersection of the two Interstates. This mall would become the catalyst for retail growth in the area. 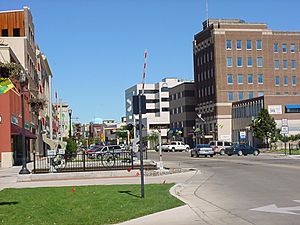 Broadway at Main in downtown Fargo

Fargo has continued to expand rapidly but steadily. Since the mid-1980s, the bulk of new residential growth has occurred in the south and southwest areas of the city due to geographic constraints on the north side. The city's major retail districts on the southwest side have likewise seen rapid development.

Downtown Fargo has been gentrified due in part to investments by the city and private developers in the Renaissance Zone. Most older neighborhoods, such as Horace Mann, have either avoided decline or been revitalized through housing rehabilitation promoted by planning agencies to strengthen the city's core.

NDSU has grown rapidly into a major research university, and forms a major component of the city's identity and economy. Most students live off-campus in the surrounding Roosevelt neighborhood. The university has established a presence downtown through both academic buildings and apartment housing. In addition, NDSU Bison Football has become a major sport following among many area residents.

Since the late 1990s, the Fargo-Moorhead Metropolitan Statistical Area has consistently had one of the lowest unemployment rates among MSAs in the United States. This, coupled with Fargo's low crime rate and the decent supply of affordable housing in the community, has prompted Money magazine to rank the city near the top of its annual list of America's most livable cities throughout the late 1990s and early 2000s. 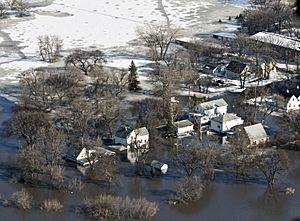 Fargo is a core city of the Fargo-Moorhead metropolitan area, which also includes Moorhead, West Fargo, and Dilworth as well as outlying communities.

Fargo's largest challenge are the seasonal floods due to the rising water of the Red River, which flows from the United States into Lake Winnipeg in Manitoba, Canada. The Red flows northward, which means melting snow and river ice, as well as runoff from its tributaries, often create ice dams causing the river to overflow. Fargo's surrounding Red River Valley terrain is essentially flat, leading to overland flooding. Since the potentially devastating flood of 2009, both Fargo and Moorhead have taken great strides in flood protection, only a near record flood would cause concern today.

Its geographical location makes the city vulnerable to flooding during seasons with above average precipitation. The Red River's "minor" flood stage in Fargo begins at a level of 18 feet, with "major" flooding categorized at 30 feet and above. Many major downtown roadways and access to Moorhead are closed off at this level. Record snowfalls late in 1996 led to flooding in 1997, causing the Red to rise to a record crest of 39.5 feet, nearly overtaking city defenses. In 2008-2009, significant fall precipitation coupled with a rapid snowmelt in March 2009 caused the Red to rise to a new record level of 40.84 feet, but again Fargo remained safe, in large part due to flood mitigation efforts instituted after the 1997 event and sandbagging efforts by the city residents. Further upgrades were made to city infrastructure and additional resources brought to bear following the 2009 flood, which caused no issues for the city in 2010 despite another rapid melt that caused the Red to rise to 37 feet (which ranks among the top ten highest levels ever recorded). Recent discussions have focused on a $1.5 billion diversion project that would channel the Red's water away from the city, but such a project is very much in the planning stages and being evaluated by various government agencies. As of 2012, Fargo has bought 700 houses in flood-prone areas.

There were 46,791 households of which 24.2% had children under the age of 18 living with them, 36.8% were married couples living together, 8.6% had a female householder with no husband present, 3.9% had a male householder with no wife present, and 50.7% were non-families. 36.6% of all households were made up of individuals and 8.3% had someone living alone who was 65 years of age or older. The average household size was 2.15 and the average family size was 2.87. 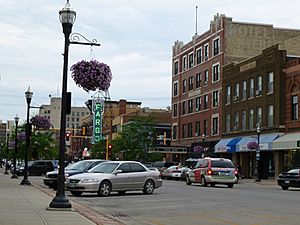 The Winter Carnival in Fargo is a tradition that began in 1928.

The Plains Art Museum is the largest museum of art in the state. It is located in downtown Fargo and features regional and national exhibits. It also houses a large permanent collection of art. There are several other museums in Fargo including The Children's Museum at Yunker Farm, The Fargo Air Museum, The Courthouse Museum, The Roger Maris Museum in West Acres Shopping Center, the North Dakota State University Wall of Fame in the Scheels All Sports store and the historic Bonanzaville village (West Fargo). 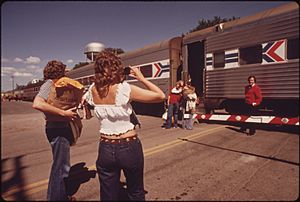 Passengers pose for a photo before boarding the Empire Builder in 1974. Amtrak trains traveling toward Chicago and Seattle stop daily between 1 and 4 o'clock in the morning.

Fargo is a major transportation hub for the surrounding region. It sits at the crossroads of two major interstate highways, I-29 and I-94 and is the home of an airport.

The BNSF Railway runs through the metropolitan area as successor to the Great Northern Railway and Northern Pacific Railroad. Amtrak service is provided via the Empire Builder passenger train at the Fargo Amtrak station.

The major north/south roads (from west to east) include: 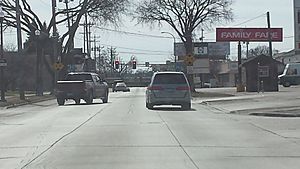 The major east/west roads (from north to south) include: 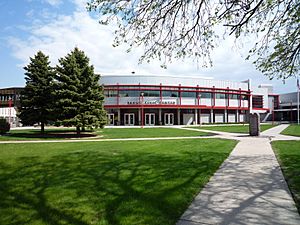 The tallest buildings in Fargo include:

Fargo is an Academy Award–winning 1996 film named after the city. Fargo is only seen briefly at the film's opening scene set in a bar and mentioned only twice in the film. None of Fargo was shot on location in or near Fargo.

A television series based on the film debuted on FX in April 2014. The city was featured in its seventh episode "Who Shaves the Barber?" The series was filmed in Calgary, Alberta.

Fargo North, Decoder was a trench coat wearing character on The Electric Company, who tried to make sense of messages with scrambled words or missing letters.

All content from Kiddle encyclopedia articles (including the article images and facts) can be freely used under Attribution-ShareAlike license, unless stated otherwise. Cite this article:
Fargo, North Dakota Facts for Kids. Kiddle Encyclopedia.