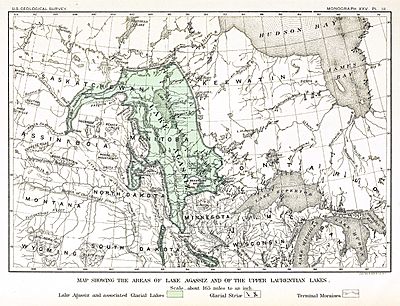 An early map of the extent of Lake Agassiz in central North America, by 19th century geologist Warren Upham. The regions covered by the lake were significantly larger than shown here.

Lake Agassiz was a very large glacial lake in central North America. Fed by glacial meltwater at the end of the last ice age, its area was larger than all of the modern Great Lakes combined.

The area that was covered by Lake Agassiz was the geographic center of North America. Its extent was about from 45° 30' to 55° of north latitude, and from 92° 30', on the international boundary, to 106°, on the Saskatchewan River.

Its existence was first proposed in 1823, It was named in 1879 after Louis Agassiz.

All content from Kiddle encyclopedia articles (including the article images and facts) can be freely used under Attribution-ShareAlike license, unless stated otherwise. Cite this article:
Lake Agassiz Facts for Kids. Kiddle Encyclopedia.