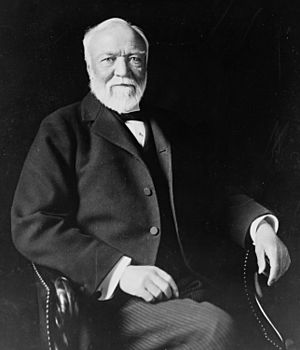 Andrew Carnegie (November 25, 1835 – August 11, 1919) was a Scottish-American businessman. He ran U.S. Steel, a major steel making corporation. When he retired, he was one of the richest men in America. He used his large amounts of money to fund charities. These charities gave money to universities. He had a hall built for himself (called Carnegie Hall), and he also built public libraries (called Carnegie Libraries).

Andrew Carnegie was very charitable in the will he created through the State of New York. In his will, he gave monetary gifts to several funds, institutions, societies, and to Pittsburgh University. He also gave gifts to his employees and family. Carnegie had given away nearly $350, 000, 000 on charities, pensions, schools, libraries, and museums. Carnegie had given all of that amount of money because after a disaster happened outside his company people thought he was a bad person. He thought by giving away all that money people would think he was good.

All content from Kiddle encyclopedia articles (including the article images and facts) can be freely used under Attribution-ShareAlike license, unless stated otherwise. Cite this article:
Andrew Carnegie Facts for Kids. Kiddle Encyclopedia.