Kids Encyclopedia Facts
This page is about the former Pennsylvania city. For other uses, see Allegheny, Pennsylvania (disambiguation).

Allegheny City was a municipality that existed in the U.S. state of Pennsylvania from 1788 until it was annexed by Pittsburgh in 1907. It was located north across the Allegheny River from downtown Pittsburgh, with its southwest border formed by the Ohio River, and is known today as the North Side. The city's waterfront district, along the Allegheny and Ohio rivers, became Pittsburgh's North Shore neighborhood. 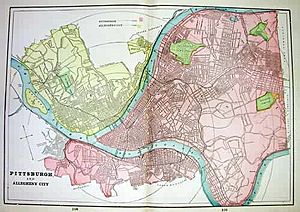 1898 map with City of Allegheny in yellow, Pittsburgh in red, and parks in green

The City of Allegheny was laid out in 1788 according to a plan by John Redick. The lots were sold in Philadelphia by the State government or given as payment to Revolutionary War veterans. It was incorporated as a borough in 1828 and as a city in 1840. Prior to the 1850s, most of the area was still largely farmland, but was subdivided into residential lots, first for the growing German population and later for Croat immigrants. It was commonly referred to as "Deutschtown," derived from the German word Deutsch, referring to the language and ethnicity.

When the two cities were joined, both of the old ward systems were discarded. A new ward system was established made up of 27 wards. In the new ward system, Allegheny was divided into wards 21 to 27. Its past territory is easily seen by viewing a map of the city wards.

In the 1960s Pittsburgh undertook a massive urban redevelopment project that demolished the historic core of Allegheny City, leaving only the Commons of Allegheny Center and its surrounding neighborhoods. The Carnegie Library, the Old Post Office Building, and the Buhl Planetarium buildings were not demolished. Major portions of the neighborhoods of Allegheny West, Manchester, Central Northside, California-Kirkbride (Old Allegheny Rows), and East Allegheny are listed on the National Register of Historic Places, including the Mexican War Streets in Central Northside.

The Teutonia Männerchor Hall in the East Allegheny (Deutschtown) neighborhood of Pittsburgh, Pennsylvania, is a building constructed in 1888. It was listed on the National Register of Historic Places in 2004. The Teutonia Männerchor is a private membership club with the purpose of furthering choral singing, German cultural traditions and good fellowship. The club features a number of heritage activities and celebrations, including choral singing in German and folk dancing.

The Priory is really two historic landmarks - the 1852 St. Mary's German Catholic Church and the adjacent 1888 home for Bavarian Benedictine priests and brothers. Once a largely German parish, the church later merged with nearby Italian and Polish congregations. The church and rectory have since closed. The buildings are operated as a banquet hall and a bed-and-breakfast.

Although Penn Brewery began in 1987, it is housed in the old Eberhardt & Ober Brewery (1882-1906) buildings. Penn Brewery makes the award-winning Penn Pilsner and a number of other specialty beers. The "tied house" (brewery owned restaurant) features a full German menu and live music.

Saint Nicholas Croatian Catholic Church, nestled in the hillside above the Allegheny River, was the first Croatian Church built in the United States. The structure was razed in January 2013.

Ridge Avenue, in its heyday between 1890 and 1910, was known as "Millionaires' Row". After 20 years, the area began to decline as some residents moved further out. The entire North Side community began to fray after having been annexed by Pittsburgh in 1907.

In the late 19th century, Allegheny became known for its stately homes, occupied by some of the area's wealthy families. One such area became known as The Mexican War Streets.

The Mexican War Streets were laid out in 1848 by General William Robinson, Jr., who later was elected as mayor of the city of Allegheny. Just returned from service in the Mexican War, he subdivided his land and named the new streets after the battles and generals (Buena Vista Street, Filson Way, Monterey Street, Palo Alto Street, Resaca Place, Sherman Avenue, Taylor Avenue) of that war.

Through his foundation matching fund, Andrew Carnegie contributed to the financing and construction of a Carnegie Free Public Library in Allegheny City.

The Felix Brunot mansion on Stockton Avenue was once used as a station on the Underground Railroad. Fugitive slaves from the South stopped here for food and shelter. While Pennsylvania was a free state, many slaves continued to Canada to gain more distance from slavecatchers.

The original Allegheny Observatory was built in 1859 near Perrysville Avenue, by prominent Allegheny citizens who formed the Allegheny Telescope Association. The association donated the observatory to the Western University of Pennsylvania (now the University of Pittsburgh) in 1867, after which it was used for astrophysical, solar, and planetary studies. The observatory maintained a successful subscription time service to railroads via telegraph for many years. A new Allegheny Observatory was built between 1900-1912 in today's Riverview Park. It is owned and operated by the University of Pittsburgh for education, astronomical research, and public lectures and tours.

All content from Kiddle encyclopedia articles (including the article images and facts) can be freely used under Attribution-ShareAlike license, unless stated otherwise. Cite this article:
Allegheny, Pennsylvania Facts for Kids. Kiddle Encyclopedia.