Kids Encyclopedia Facts
This page is about the specific neighborhood named Central Northside. For the larger region of which this neighborhood is a constituent, see North Side (Pittsburgh).

Central Northside is a neighborhood in the North Side of the city of Pittsburgh, Pennsylvania, USA. It has a zip code of 15212, and has representation on Pittsburgh City Council by the council member for District 6 (Downtown/Northshore Neighborhoods). Originally known as "The Buena Vista Tract", it is densely filled with restored row houses, community gardens and tree lined streets and alleyways.

In the late 19th century, Allegheny, Pennsylvania (later annexed by Pittsburgh) became known for its stately homes, occupied by some of the area's wealthy families. One such area became known as the Mexican War Streets.

The Mexican War Streets were laid out in 1847, during the Mexican–American War, by William Robinson Jr., ex-mayor of the city of Allegheny. Robinson, who contrary to some tellings did not actually serve in the war, subdivided his land and named the new streets after the war's battles and generals (Buena Vista Street, Filson Way, Monterey Street, Palo Alto Street, Resaca Place, Sherman Avenue, Taylor Avenue). 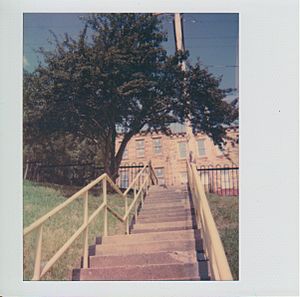 On 10 September 2012, the Central Northside Neighborhood Council (CNNC) voted to change the neighborhood's name to Allegheny City Central. However, according to an FAQ published by the CNNC in August 2012, the Council reported that official city maps would "probably not" reflect the name change and that the city planning department is "always very reluctant" to alter established names. The same document refers to the name change as a "branding initiative" which is part of a "new brand and marketing strategy".

All content from Kiddle encyclopedia articles (including the article images and facts) can be freely used under Attribution-ShareAlike license, unless stated otherwise. Cite this article:
Central Northside (Pittsburgh) Facts for Kids. Kiddle Encyclopedia.