Kids Encyclopedia Facts
Not to be confused with Allegheny, Pennsylvania.

Allegheny County is a county in the southwestern quarter of the U.S. state of Pennsylvania. As of 2014 the population was 1,231,225, making it the second-most populous county in Pennsylvania, following Philadelphia County. The county seat is Pittsburgh. Allegheny County is included in the Pittsburgh, PA Metropolitan Statistical Area. The county is in the Pittsburgh Designated Market Area.

Allegheny County was the first in Pennsylvania to be given a Native American name, being named after the Allegheny River. The word "Allegheny" is of Lenape origin, with uncertain meaning. It is usually said to mean "fine river", but sometimes said to refer to an ancient mythical tribe called "Allegewi" that lived along the river long ago before being destroyed by the Lenape.

Not a great deal is known about the native inhabitants of the region prior to European contact. During the colonial era various native groups claimed or settled in the area, resulting in a multi-ethnic mix that included Iroquois, Lenape, Shawnee, and Mingo. European fur traders such as Peter Chartier established trading posts in the region in the early eighteenth century.

In 1749 Captain Pierre Joseph Céloron de Blainville, claimed the Ohio Valley and all of western Pennsylvania for Louis XV of France. The captain traveled along the Ohio and Allegheny rivers inserting lead plates in the ground to mark the land for France.

Since most of the towns during that era were developed along waterways, both the French and the British desired control over the local rivers. Therefore, the British sent Major George Washington to try to compel the French to leave their posts, with no success. Having failed in his mission, he returned and nearly drowned crossing the ice-filled Allegheny River. In 1754, the English tried again to enter the area. This time, they sent 41 Virginians to build Fort Prince George. The French got news of the plan and sent an army to take over the fort, which they then resumed building with increased fortification, renaming it Fort Duquesne.

The loss of the fort cost the English dearly because Fort Duquesne became one of the focal points of the French and Indian War. The first attempt to retake the fort, the Braddock Expedition, failed miserably. It was not until General John Forbes attacked in 1758, four years after they had lost the original fort, that they recaptured and destroyed it. They subsequently built a new fort on the site, including a moat, and named it Fort Pitt. The site is now Pittsburgh's Point State Park.

Both Pennsylvania and Virginia claimed the region that is now Allegheny County. Pennsylvania administered most of the region as part of its Westmoreland County. Virginia considered everything south of the Ohio River and east of the Allegheny River to be part of its Yohogania County and governed it from Fort Dunmore. In addition, parts of the county were located in the proposed British colony of Vandalia and the proposed U.S. state of Westsylvania. The overlapping boundaries, multiple governments, and confused deed claims soon proved unworkable. In 1780 Pennsylvania and Virginia agreed to extend the Mason–Dixon line westward, and the region became part of Pennsylvania. From 1781 until 1788, much of what had been claimed as part of Yohogania County, Virginia, was administered as a part of the newly created Washington County, Pennsylvania.

Allegheny County was officially created on September 24, 1788, from parts of Washington and Westmoreland counties. It was formed due to pressure from settlers living in the area around Pittsburgh, which became the county seat in 1791. The county originally extended all the way north to the shores of Lake Erie and became the "mother county" for most of what is now northwestern Pennsylvania. By 1800, the county's current borders were set. 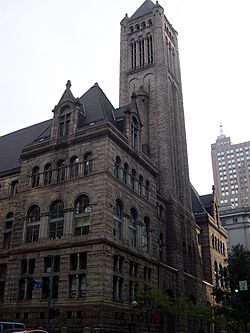 In the 1790s, a whiskey excise tax was imposed by the United States federal government. This started the so-called Whiskey Rebellion when the farmers who depended on whiskey income refused to pay and drove off tax collector John Neville. After a series of demonstrations by farmers, President George Washington sent troops to stop the rebellion.

The area developed rapidly throughout the 19th century to become the center of steel production in the nation. Pittsburgh would later be labeled the "Steel Capital of the World".

Allegheny County is known for the three major rivers that flow through it: the Allegheny River and the Monongahela River converge at Downtown Pittsburgh to form the Ohio River. The Youghiogheny River flows into the Monongahela River at McKeesport, 10 miles (16 km) southeast. Several islands are located within the riverine systems. Water from these rivers eventually flows into the Gulf of Mexico via the Mississippi River. Although the county's industrial growth caused the clearcutting of forests, a significant woodland remains.

The Three Rivers Heritage Trail provides uninterrupted bicycle and pedestrian connections along the three rivers in the city, and the Great Allegheny Passage trail runs from downtown Pittsburgh to Washington, D.C. 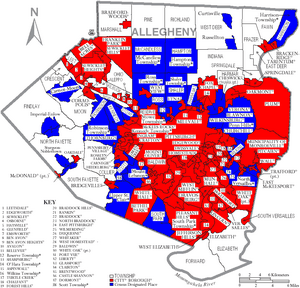 Under Pennsylvania law, there are four types of incorporated municipalities: cities, boroughs, townships, and (in one case) a town. The following municipalities are in Allegheny County:

Census-designated places are geographical areas designated by the US Census Bureau for the purposes of compiling demographic data. They are not actual jurisdictions under Pennsylvania law. Other unincorporated communities, such as villages, may be listed here as well.

Many political subdivisions of Allegheny County have come and gone through subdivision or annexation through the years. These include:

The population ranking of the following table is based on the 2010 census of Allegheny County.

All content from Kiddle encyclopedia articles (including the article images and facts) can be freely used under Attribution-ShareAlike license, unless stated otherwise. Cite this article:
Allegheny County, Pennsylvania Facts for Kids. Kiddle Encyclopedia.