The university's 140-acre (57 ha) main campus is 3 miles (4.8 km) from Downtown Pittsburgh. Carnegie Mellon has seven colleges and independent schools: the College of Engineering, College of Fine Arts, Dietrich College of Humanities and Social Sciences, Mellon College of Science, Tepper School of Business, H. John Heinz III College of Information Systems and Public Policy, and the School of Computer Science. The university also has campuses in Qatar and Silicon Valley, with degree-granting programs in six continents.

Carnegie Mellon consistently ranks in the top 25 in the national U.S. News & World Report rankings. It is home to the world’s first degree-granting Robotics and Drama programs, as well as one of the first Computer Science departments. The university spent $242 million on research in 2015. 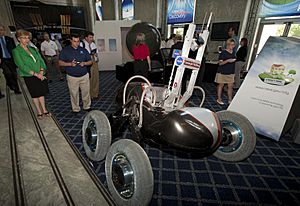 Scarab lunar rover is being developed by the RI.

For the 2006 fiscal year, the University spent $315 million on research. The primary recipients of this funding were the School of Computer Science ($100.3 million), the Software Engineering Institute ($71.7 million), the College of Engineering ($48.5 million), and the Mellon College of Science ($47.7 million). The research money comes largely from federal sources, with federal investment of $277.6 million. The federal agencies that invest the most money are the National Science Foundation and the Department of Defense, which contribute 26% and 23.4% of the total university research budget respectively.

The recognition of Carnegie Mellon as one of the best research facilities in the nation has a long history, as early as the 1987 Federal budget CMU was ranked as third in the amount of research dollars with $41.5 million with only MIT and Johns Hopkins receiving more research funds from the Department of Defense.

The Robotics Institute (RI) is a division of the School of Computer Science and considered to be one of the leading centers of robotics research in the world. The Field Robotics Center (FRC) has developed a number of significant robots, including Sandstorm and H1ghlander, which finished second and third in the DARPA Grand Challenge, and Boss, which won the DARPA Urban Challenge. The Robotics Institute has partnered with a spinoff company, Astrobotic Technology, to land a CMU robot on the moon by 2016 in pursuit of the Google Lunar XPrize. The robot, known as Andy, is designed to explore lunar pits, which might include entrances to caves. The RI is primarily sited at Carnegie Mellon's main campus in Newell-Simon hall.

The Software Engineering Institute (SEI) is a federally funded research and development center sponsored by the U.S. Department of Defense and operated by Carnegie Mellon University, with offices in Pittsburgh, Pennsylvania, USA; Arlington, Virginia, and Frankfurt, Germany. The SEI publishes books on software engineering for industry, government and military applications and practices. The organization is known for its Capability Maturity Model (CMM) and Capability Maturity Model Integration (CMMI), which identify essential elements of effective system and software engineering processes and can be used to rate the level of an organization's capability for producing quality systems. The SEI is also the home of CERT/CC, the federally funded computer security organization. The CERT Program's primary goals are to ensure that appropriate technology and systems management practices are used to resist attacks on networked systems and to limit damage and ensure continuity of critical services subsequent to attacks, accidents, or failures.

The Human-Computer Interaction Institute (HCII) is a division of the School of Computer Science and is considered one of the leading centers of human-computer interaction research, integrating computer science, design, social science, and learning science. Such interdisciplinary collaboration is the hallmark of research done throughout the university.

The Language Technologies Institute (LTI) is another unit of the School of Computer Science and is famous for being one of the leading research centers in the area of language technologies. Primary research focus of the institute is on machine translation, speech recognition, speech synthesis, information retrieval, parsing and information extraction. Until 1996, the institute existed as the Center for Machine Translation that was established in 1986. From 1996 onwards, it started awarding graduate degrees and the name was changed to Language Technologies Institute.

Carnegie Mellon also develops cross-disciplinary and university-wide institutes and initiatives to take advantage of strengths in various colleges and departments and develop solutions in critical social and technical problems. To date, these have included the Cylab Security and Privacy Institute, the Wilton E. Scott Institute for Energy Innovation, the BrainHub, the Simon Initiative, and the Disruptive Healthcare Technology Institute.

All content from Kiddle encyclopedia articles (including the article images and facts) can be freely used under Attribution-ShareAlike license, unless stated otherwise. Cite this article:
Carnegie Mellon University Facts for Kids. Kiddle Encyclopedia.