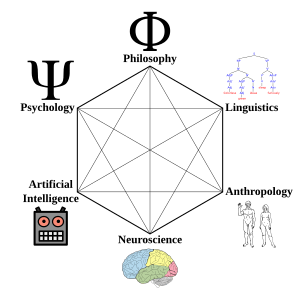 Figure illustrating the fields that contributed to the birth of cognitive science, including linguistics, neuroscience, artificial intelligence, philosophy, anthropology, and psychology

Cognitive science studies how people make their ideas and what makes thoughts logical.

It is often seen as the result of several different scientific fields working together. These fields are psychology (a study of the mind), neuroscience (biological study of the brain), computer science (the creation of programs and computers), and linguistics (the study of language). It does not refer to the sum of all these disciplines. It refers to their intersection on specific problems.

Cognitive Science tends to view the world outside the mind much as other sciences do; thus it has an objective, observer-independent existence.

The term "cognitive" in "cognitive science" is "used for any kind of mental operation or structure that can be studied in precise terms." (Lakoff and Johnson 1999) This conceptualization is very broad.

The earliest entries for the word "cognitive" in the OED take it to mean roughly pertaining to "to the action or process of knowing".

Many but not all who consider themselves cognitive scientists have a functionalist view of mind/intelligence, which means that, at least in theory, they study mind and intelligence from the perspective that these attributes could perhaps (at least someday) be properly attributed not only to human beings but also to, say, other animal species, alien life forms or particularly advanced computer systems. This perspective is one of the reasons the term "cognitive science" is not exactly coextensive with neuroscience, psychology, or some combination of the two.

All content from Kiddle encyclopedia articles (including the article images and facts) can be freely used under Attribution-ShareAlike license, unless stated otherwise. Cite this article:
Cognitive science Facts for Kids. Kiddle Encyclopedia.