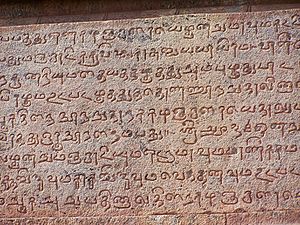 Linguistics is the study of language. People who study language are called linguists.

Although linguistics is the scientific study of language, a number of other intellectual disciplines are relevant to language and intersect with it. Semiotics, for example, is the general study of signs and symbols both within language and without. Literary theorists study the use of language in literature. Linguistics additionally draws on and informs work from such diverse fields as acoustics, anthropology, biology, computer science, human anatomy, informatics, neuroscience, philosophy, psychology, sociology, and speech-language pathology. Discourse analysis is the study of entire conversations or texts.

Linguistics studies one language next to another to find similar properties. Doing that makes it possible to find things shared by all the languages of the world, and also find out which languages are related to each other. Linguists who study how languages are structured and how they work are said to study theoretical linguistics.

The part of linguistics which aims to find out how languages works in the mind is known as psycholinguistics.

The study of language began in India with Pāṇini, the 5th century BC grammarian who wrote about the 3,959 rules of Sanskrit morphology, which described the different kinds of vowels and consonants Sanskrit had, as well as verb and noun classes. In the Middle East, Sibawayh (سیبویه) wrote a book about Arabic in 760 AD called Al-kitab fi al-nahw (الكتاب في النحو, The Book on Grammar); he was the first known author to talk about the difference between sounds and phonemes.

Linguistics started in the western world as early as it did in the East, but western linguistics at that time was more like philosophy, and less the study of language. Plato was the first western philosopher to write about semantics in his Cratylus dialogue, where he argues that words represent concepts that are eternal and exist in the world of ideas, and the word etymology is first used to talk about the history behind a word's meaning.

All content from Kiddle encyclopedia articles (including the article images and facts) can be freely used under Attribution-ShareAlike license, unless stated otherwise. Cite this article:
Linguistics Facts for Kids. Kiddle Encyclopedia.