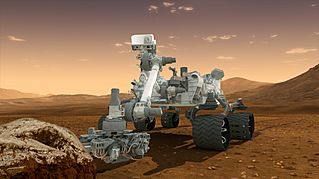 A robot in action on Mars.

Robotics is a part of engineering and science. It has to do with the creation and building of robots, as well as computer programming. It is interdisciplinary, using mechanical, electrical and other kinds of engineering. Robots are sometimes used to do things that humans cannot, like finding and destroying bombs, or going places that are too hot, small, dangerous or distant for humans. Some robots look like humans, but most just look like machines.

Alyosha (callsign：MPM-100) - Simulacrum of the Robonaut.

All content from Kiddle encyclopedia articles (including the article images and facts) can be freely used under Attribution-ShareAlike license, unless stated otherwise. Cite this article:
Robotics Facts for Kids. Kiddle Encyclopedia.