(This article is about the NASA InSight mission. Click here for the Insight that is the act of understanding the inner nature of things.)

The Interior Exploration using Seismic Investigations, Geodesy and Heat Transport (InSight) mission is a robotic lander designed to study the deep interior of the planet Mars. It was manufactured by Lockheed Martin and is managed by NASA's Jet Propulsion Laboratory. The mission launched on 5 May 2018 at 11:05 UTC aboard an Atlas V-401 rocket and successfully landed at Elysium Planitia on Mars on November 26, 2018, 19:52:59 UTC. InSight traveled 483 million km (300 million mi) during its journey.

The lander was originally planned for launch in March 2016. Following a persistent vacuum failure in the SEIS instrument prior to launch, with the 2016 launch window missed, InSight was returned to Lockheed Martin's facility in Denver, Colorado, for storage. NASA officials decided in March 2016 to delay launching InSight to May 2018. This allowed time for the seismometer issue to be fixed, although it increased the cost from the previous US$675 million to a total of US$830 million. By reusing technology from the Mars Phoenix lander, which successfully landed on Mars in 2008, mission costs were reduced. 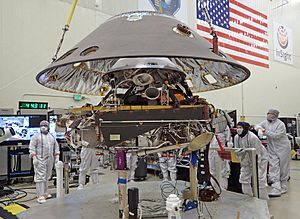 InSight comes together with the backshell and surface lander being joined, 2015.

Lockheed Martin began construction of the lander on 19 May 2014, with general testing starting in 27 May 2015.

On 9 March 2016, NASA officials announced that InSight would be delayed until the 2018 launch window at an estimated cost of US$150 million. The spacecraft was rescheduled to launch on 5 May 2018 for a Mars landing on 26 November at 3 p.m.

On 22 November 2017 InSight completed testing in a thermal vacuum, also known as TVAC testing, where the spacecraft is put in simulated space conditions with reduced pressure and various thermal loads. On 23 January 2018, after a long storage, its solar panels were once again deployed and tested, and a second silicon chip containing 1.6 million names from the public was added to the lander.

On 28 February 2018, InSight was shipped via C-17 cargo aircraft from the Lockheed Martin Space Systems building in Denver to the Vandenberg Air Force Base in California in order to be integrated to the launch vehicle. 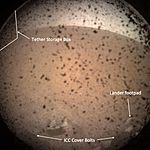 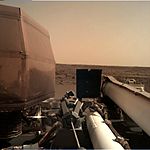 A few hours later, at about 1:30 UTC (8:30 p.m. EST), NASA's Mars Odyssey orbiter relayed signals indicating that InSight's solar panels successfully unfurled and are generating electrical power. Enough power is being generated to recharge its batteries daily. Odyssey also relayed a pair of images showing InSight's landing site. More images will be taken in stereo pairs to create 3D images, allowing InSight to find the best places to put the heat probe and seismometer. Over the next few weeks, InSight will check health indicators and monitor both weather and temperature conditions at the landing site.

The meteorological suite (TWINS) and magnetometer are operational, but science does not fully begin for ten weeks after landing, and the mission will take up to three months to deploy and commission the geophysical science instruments.

The InSight mission placed a single stationary lander on Mars to study its deep interior and address a fundamental issue of planetary and Solar System science: understanding the processes that shaped the rocky planets of the inner Solar System (including Earth) more than four billion years ago.

Interiors of Earth, Mars and the Moon (artist concept)

InSight's primary objective is to study the earliest evolutionary history of the processes that shaped Mars. By studying the size, thickness, density and overall structure of Mars' core, mantle and crust, as well as the rate at which heat escapes from the planet's interior, InSight will provide a glimpse into the evolutionary processes of all of the rocky planets in the inner Solar System.

The mission will determine if there is any seismic activity, measure the rate of heat flow from the interior, estimate the size of Mars' core and whether the core is liquid or solid.

After landing, the mission will take three months to deploy and commission the science instruments. It will then begin its mission of observing Mars, which is expected to last for two years. 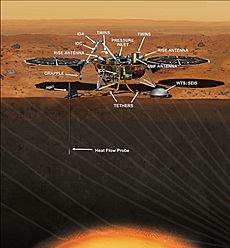 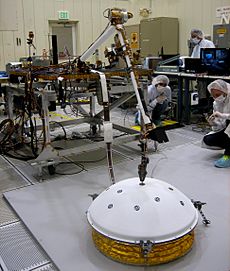 InSight's payload has a total mass of 50 kg, including science instruments and support systems such as the Auxiliary Payload Sensor Suite, cameras, the instrument deployment system, and a laser retroreflector. The science payload consists of two main instruments, SEIS and HP3: 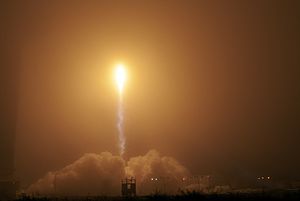 The spacecraft was launched on 5 May 2018 at 11:05 UTC on an Atlas V 401 launch vehicle (AV-078) from Vandenberg Air Force Base Space Launch Complex 3-East. This was the first American interplanetary mission to launch from California.

The launch was managed by NASA's Launch Services Program. InSight was originally scheduled for launch on 4 March 2016 on an Atlas V 401 (4 meter fairing/zero (0) solid rocket boosters/single (1) engine Centaur) from Vandenberg Air Force Base in California, U.S., but was called off in December 2015 due to a vacuum leak on the SEIS instrument. The rescheduled launch window ran from 5 May to 8 June 2018.

The journey to Mars took 6.5 months across 484 million km (301 million mi) for a touchdown on 26 November. Landing successfully, a three-month-long deployment phase commenced as part of its two-year (about one Martian year) prime mission. 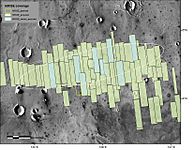 Image footprints by HiRise on Mars Reconnaissance Orbiter for studying the planned Insight landing ellipse. From east to west the scale is about 160 km (100 mi) 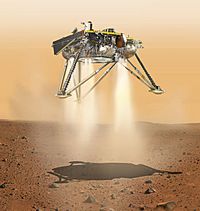 On 26 November 2018, at approximately 19:53 UTC, mission controllers received a signal via the Mars Cube One (MarCO) satellites that the spacecraft had successfully touched down at Elysium Planitia. After landing, the mission will take three months to deploy and commission the geophysical science instruments. It will then begin its mission of observing Mars, which is planned to last for two years.

The Mars Cube One (MarCO) spacecraft are a pair of 6U CubeSats that piggybacked with the InSight mission to test CubeSat navigation and endurance in deep space, and to help relay real-time communications (eight minute delay) during the probe's entry, descent and landing (EDL) phase.

All content from Kiddle encyclopedia articles (including the article images and facts) can be freely used under Attribution-ShareAlike license, unless stated otherwise. Cite this article:
InSight Facts for Kids. Kiddle Encyclopedia.