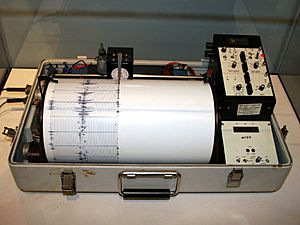 A seismometer or seismograph is an instrument that measures motions of the ground, including those generated by earthquakes, nuclear explosions and other sources.

Records of seismic waves called seismograms allow us to map the interior of the Earth, and to find and measure the size of those different sources.

The word derives from the Greek word, seismós, a shaking or quake, from the verb σείω, seíō, to shake; and μέτρον, métron, measure.

The technique of using a seismometer to build up a picture of the Earth's interior is called seismic tomography.

All content from Kiddle encyclopedia articles (including the article images and facts) can be freely used under Attribution-ShareAlike license, unless stated otherwise. Cite this article:
Seismometer Facts for Kids. Kiddle Encyclopedia.