The Jet Propulsion Laboratory (JPL) is a federally funded research and development center and NASA field center in Pasadena, California, United States, with large portions of the campus in La Cañada Flintridge, California.

Founded in 1930s, the JPL is currently owned by NASA and managed by the nearby California Institute of Technology (Caltech) for NASA. The laboratory's primary function is the construction and operation of planetary robotic spacecraft, though it also conducts Earth-orbit and astronomy missions. It is also responsible for operating NASA's Deep Space Network.

Among the laboratory's major active projects are the Mars Science Laboratory mission (which includes the Curiosity rover), the Mars Exploration Rover Opportunity, the Mars Reconnaissance Orbiter, the Dawn mission to the dwarf planet Ceres and asteroid Vesta, the Juno spacecraft orbiting Jupiter, the NuSTAR X-ray telescope, SMAP Satellite for earth surface soil moisture and the Spitzer Space Telescope. It is also responsible for managing the JPL Small-Body Database, and provides physical data and lists of publications for all known small Solar System bodies. 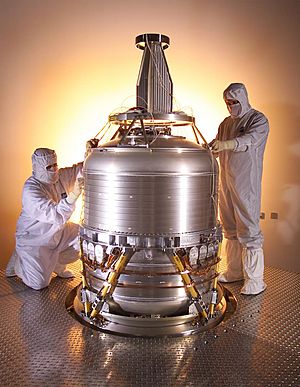 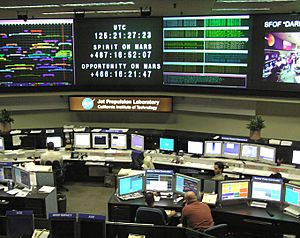 The control room at JPL

JPL traces its beginnings to 1936 in the Guggenheim Aeronautical Laboratory at the California Institute of Technology (GALCIT) when the first set of rocket experiments were carried out in the Arroyo Seco. Caltech graduate students tested a small, alcohol-fueled motor to gather data. Eventually it was arranged for U.S. Army financial support for this "GALCIT Rocket Project" in 1939.

In 1941 it demonstrated the first jet-assisted takeoff (JATO) rockets to the Army. In 1943 it established the Aerojet Corporation to manufacture JATO rockets. The project took on the name Jet Propulsion Laboratory in November 1943, formally becoming an Army facility operated under contract by the university.

During JPL's Army years, the laboratory developed two deployed weapon systems, the MGM-5 Corporal and MGM-29 Sergeant intermediate range ballistic missiles. These missiles were the first US ballistic missiles developed at JPL. It also developed a number of other weapons system prototypes, such as the Loki anti-aircraft missile system, and the forerunner of the Aerobee sounding rocket.

At various times, it carried out rocket testing at the White Sands Proving Ground, Edwards Air Force Base, and Goldstone, California. A lunar lander was also developed in 1938-39 which influenced design of the Apollo Lunar Module in the 1960s. 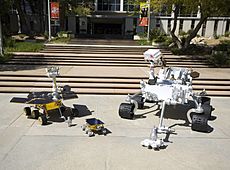 MSL mockup compared with the Mars Exploration Rover and Sojourner rover by the Jet Propulsion Laboratory on May 12, 2008

JPL was transferred to NASA in December 1958, becoming the agency's primary planetary spacecraft center. JPL engineers designed and operated Ranger and Surveyor missions to the Moon that prepared the way for Apollo. JPL also led the way in interplanetary exploration with the Mariner missions to Venus, Mars, and Mercury. In 1998, JPL opened the Near-Earth Object Program Office for NASA. As of 2013, it has found 95% of asteroids that are a kilometer or more in diameter that cross Earth's orbit.

JPL was early to employ female mathematicians. In the 1940s and 1950s, using mechanical calculators, women in an all-female computations group performed trajectory calculations. In 1961, JPL hired Dana Ulery as the first female engineer to work alongside male engineers as part of the Ranger and Mariner mission tracking teams.

JPL has been recognized four times by the Space Foundation: with the Douglas S. Morrow Public Outreach Award, which is given annually to an individual or organization that has made significant contributions to public awareness of space programs, in 1998; and with the John L. "Jack" Swigert, Jr., Award for Space Exploration on three occasions – in 2009 (as part of NASA's Phoenix Mars Lander Team), 2006 and 2005. 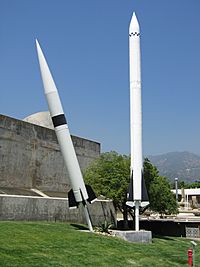 Research rockets on display at JPL

When it was founded, JPL's site was immediately west of a rocky flood-plain – the Arroyo Seco riverbed – above the Devil's Gate dam in the northwestern panhandle of the city of Pasadena. While the first few buildings were constructed in land bought from the city of Pasadena, subsequent buildings were constructed in neighboring unincorporated land that later became part of La Cañada Flintridge.

Nowadays, most of the 177 acres (72 ha) of the U.S. federal government-owned NASA property that makes up the JPL campus is located in La Cañada Flintridge. Despite this, JPL still uses a Pasadena address (4800 Oak Grove Drive, Pasadena, CA 91109) as its official mailing address. The city of La Cañada Flintridge was incorporated in 1976, well after JPL attained international recognition as a Pasadena institution.

There are approximately 6,000 full-time Caltech employees, and typically a few thousand additional contractors working on any given day. NASA also has a resident office at the facility staffed by federal managers who oversee JPL's activities and work for NASA. There are also some Caltech graduate students, college student interns and co-op students.

The JPL Education Office serves educators and students by providing them with activities, resources, materials and opportunities tied to NASA missions and science. The mission of its programs is to introduce and further students' interest in pursuing STEM (science, technology, engineering and mathematics) careers. 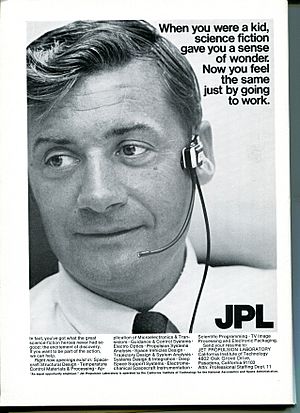 JPL offers research, internship and fellowship opportunities in the summer and throughout the year to high school through postdoctoral and faculty students. (In most cases, students must be U.S. citizens or legal permanent residents to apply, although foreign nationals studying at U.S. universities are eligible for limited programs.) Interns are sponsored through NASA programs, university partnerships and JPL mentors for research opportunities at the laboratory in areas including technology, robotics, planetary science, aerospace engineering, and astrophysics.

In August 2013, JPL was named one of "The 10 Most Awesome College Labs of 2013" by Popular Science, which noted that about 100 students who intern at the laboratory are considered for permanent jobs at JPL after they graduate.

JPL created the NASA Museum Alliance in 2003 out of a desire to provide museums, planetariums, visitor centers and other kinds of informal educators with exhibit materials, professional development and information related to the upcoming landing of the Mars rovers Spirit and Opportunity. The Alliance now has more than 500 members, who get access to NASA displays, models, educational workshops and networking opportunities through the program.

The Museum Alliance is a subset of the JPL Education Office's Informal Education group, which also serves after-school and summer programs, parents and other kinds of informal educators. 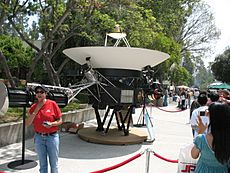 The lab has an open house once a year on a Saturday and Sunday in May or June, when the public is invited to tour the facilities and see live demonstrations of JPL science and technology. More limited private tours are also available throughout the year if scheduled well in advance.

Thousands of schoolchildren from Southern California and elsewhere visit the lab every year. Starting from 2016, JPL replaced annual Open House with "Ticket to Explore JPL", which features the same exhibits but requires tickets and advance reservation.

In addition to its government work, JPL has also assisted the nearby motion picture and television industries, by advising them about scientific accuracy in their productions. Science fiction shows advised by JPL include Babylon 5 and its sequel series, Crusade.

JPL also works with the Department of Homeland Security Science and Technology Directorate (DHSSTD). JPL and DHSSTD developed a search and rescue tool for first responders called FINDER. First responders can use FINDER to locate people still alive who are buried in rubble after a disaster or terrorist attack. FINDER uses microwave radar to detect breathing and pulses.

JPL is a federally funded research and development center (FFRDC) managed and operated by Caltech under a contract from NASA. In fiscal year 2012, the laboratory's budget was slightly under $1.5 billion, with the largest share going to Earth Science and Technology development. 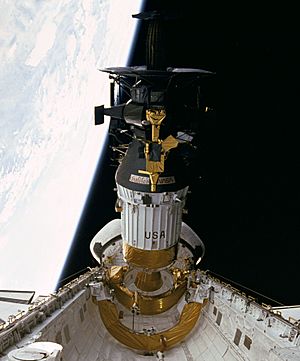 Galileo spacecraft being deployed on Oct. 18, 1989 from the payload bay. Galileo is a scientific craft that will go into orbit around the planet Jupiter 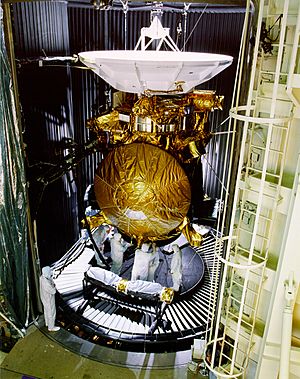 These are some of the missions partially sponsored by JPL:

All content from Kiddle encyclopedia articles (including the article images and facts) can be freely used under Attribution-ShareAlike license, unless stated otherwise. Cite this article:
Jet Propulsion Laboratory Facts for Kids. Kiddle Encyclopedia.