Ceres, also known as 1 Ceres, is the smallest dwarf planet in the Solar System and the only one in the main asteroid belt.

It was discovered on 1 January 1801, by Giuseppe Piazzi, and is named after the Roman goddess Ceres, as the goddess of growing plants, the harvest, and of motherly love. After about 200 years from its discovery, the International Astronomical Union decided to upgrade Ceres from an asteroid (or minor planet) to dwarf planetary status in 2006.

With a diameter of about 950 km, Ceres is by far the largest and most massive object in the asteroid belt, and has about a third of the belt's total mass. It was once thought to be smaller than Vesta, which is brighter. The asteroid is spherical, unlike the irregular shapes of smaller bodies with lower gravity. At its brightest it is still too dim to be seen with the naked eye.

On September 27, 2007, NASA launched the Dawn space probe to explore Ceres and Vesta. In 2015, Dawn became the first spacecraft to visit a dwarf planet, arriving at Ceres a few months before NASA's New Horizons spacecraft visited Pluto, another dwarf planet.

Ceres has an unusual crater, Occator which contains bright salts. 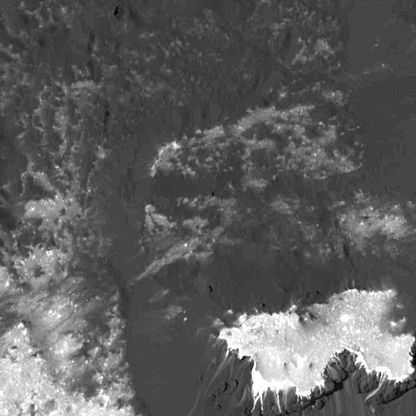 Close up image of bright salts, imaged by the Dawn spacecraft, in the crater Occator on Ceres.

All content from Kiddle encyclopedia articles (including the article images and facts) can be freely used under Attribution-ShareAlike license, unless stated otherwise. Cite this article:
Ceres (dwarf planet) Facts for Kids. Kiddle Encyclopedia.